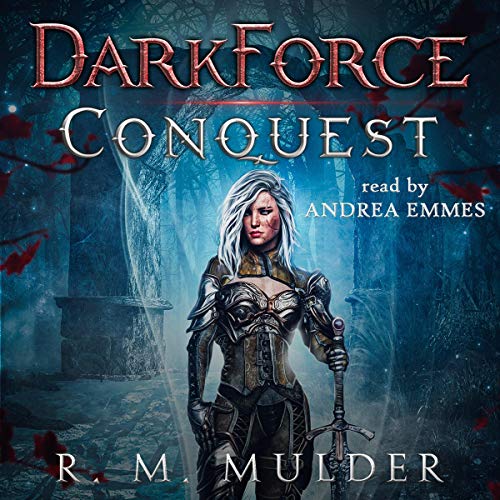 The future of mankind is in the hands of one woman - but only she can See it.

Over the last 500 years, Timur Demyan has used his ungodly powers to decimate countless empires. Now, the immortal villain stands as the CEO of the company that has developed DarkForce, the most popular augmented reality video game in the world. What gamers don’t know is that DarkForce has been patterned after an alien planet inhabited by the Leviathan, a loathsome creature with whom Timur has forged an alliance.

Undercover operative Lily Thatcher has only just begun to unlock innate Seer abilities that allow her to witness past, present, and potential future events after she overcame certain death. Now dragged away to another world with a sentient dragon by her side, will her powers be enough to stop Timur and prevent Earth’s apocalyptic fate?

What listeners say about Conquest: DarkForce

This was well written and well narrated.

The story unfolded in layers, and just when you think you have it worked out, something else appeared and it kept you guessing. The characters grew with the story and sometimes revealed bits of their story that you didn’t know earlier.

Andrea Emmes completed the narration brilliantly, having the perfect voice for the book, giving each character a unique voice, even the deep gruff male voices.

This felt like a VR game that I was in, and although this was the first book by R. M. Mulder that I’ve listened to, it will not be the last.

I was given this book on the provision I leave an honest and voluntary review.
Please remember this is only my opinion.

honestly I found this book hard to finish.
a lot of religious content and references, and not what I'd class as LITRPG.

I'm quite sure people will make up their own minds about this book.
sadly for me I just couldn't get into it.

Conquest
By: R. M. Mulder
Narrated by: Andrea Emmes
This is an audible book I requested and the review is voluntary.
This is not a litRPG, it is about a fantasy that takes place sending people to another world or dimension through a portal.
I found it very interesting in the beginning and up to about half way and there it began to bog down. If it had been a print or e-book I might have skimmed portions but that is not possible with an audible book. I really wanted to like this book. It didn't really get much better and the end was a disappointment altogether.
The one good thing about the book was the narrator. If it wasn't for the narrator I might not have made it through at all. She made the voices great, all of them, even the deep gruff male voices she did perfect! She helped me stick it out when I wanted to quit. Her excitement kept me going. She was the perfect voice for this book.

What genre-bending read. This had everything from Historic Asian figures, the Bible, gaming elements, and high tech stuff. Narrator Andrea Emmes knocks it out of the ball park as usual. Having a good narrator truly makes a difference, and with certain books, it's all the difference.

Another world, mystical forces, a dash of Sci-fi Tech, a great evil and a Apocalyptic Fate all wrapped up with links to ancient prophecies. This strange mix works blending into an interesting setting where the story takes place.

R. M. Mulder has done a good job with this book. The writing is well done crafting an interesting and engaging story. The characters actions and dialogue flow naturally and the book has good pacing to keep you listing. There are no perfect characters here they are all flawed enough to be realistic.

The narration is clear and easy to listen to Andrea Emmes gives each character a unique voice. There are some olde English bits and they are done consistently which adds to the setting rather than distracting from it. There were no errors I noticed in the recording.

I prefer the first half of the book over the second as when both myself and the characters knew less about what was going on there was more of a sense of tension and mysterious threat but the second half is still good.

All and all an interesting listen that is worth putting the hours in to.

This was a well written and narrated book. It had a great mix of characters and plot, and although it was a little slow at times, kept my interest. This was in large part due to the narrator. I would definitely be open to more if this becomes a series.

I received an audio copy of this book from the author and narrator in exchange for my honest opinion. I then purchased the Kindle copy to go with it. My views are in no way influenced by the gifting of the audio.

This book is definitely on my list of re-reads. While I absolutely enjoyed it, I feel like there was so much to this book that I am going to have to read it, maybe twice more, just to grasp everything. That's not a bad thing. I love books that have so much going on, making them easy to dive back into without being bored the second time around. It did take me a bit to get into this book, just from the sheer amount of information and world-building.

I loved how this story unfolded in layers. Each time I thought I knew what was going on, something new was added. It left me continually guessing what was going to happen next, a definite plus in my book. The same goes for the characters. I enjoyed how they grew throughout the story, changing and sometimes revealing bits of themselves that you didn't know earlier in the story. I wasn't too sure about Lily's character in the beginning but that was quickly resolved. As she continued throughout the story, she became one of my favorites. I also thought Alan was just a pushover in the beginning but that changed, as well. It was nice, as well, to be able to get into the villain's head and really see why he thought everything should work out his way. It always shows great writing if the author is able to make you interested in the villain's story, as well. That definitely happened here.

And the narration! Andrea Emmes, as always, did a spectacular job. I felt like I was dropped into Alan and Lily's world, watching the events unfold along with them. Her pacing was such that I was able to speed the audio up (it's one of my little quirks, don't hate!) and it still sounded natural. And she is one of those narrators who makes it seem effortless to switch voices for the characters, giving each one their own special quality. I had no trouble knowing who was speaking in this book.

This is definitely one book I will be revisiting in 2018, to soak up even more!

The plot premise is interesting, places where the story feels very forced and jumps ahead. Overall a fair listen.


This book was provided at no cost for a fair and honest review.

I loved the narrator in this book. | thought she did a great job of voicing the characters and making them more realistic. Unfortunately, the book was not as good. I loved it to begin with, but as the book progressed I felt it was dragging, some parts I found confusing and it has clique images and scenarios.

this is a really interesting book. it has religious elements but it's not a religious book. it takes characters from the Bible and builds on their story and those of their decendants and what happened to them. it's about Lily, an undercover agent who is watching 2 different people and how everything goes south when the truth about them comes out. there's a fifth horseman of the apocolypse and he's about to throw a wrench in the fourth's plans.

What did you love best about Conquest?

I'm a history buff so this twist really intrigued me and I love how it all came together. Highly entertaining!

Well thought out and researched with intriguing story elements.

What does Andrea Emmes bring to the story that you wouldn’t experience if you just read the book?

Andrea Emmes brings any book to life, but really excels in this performance. Highly engaging and easy to listen to.

Probably won’t listen to this one again

Okay story, but it skipped around too much for my taste and it felt like I missed parts of the story. Great performance from the narrator, she gave each character a unique voice. I received a free review copy of this audiobook at my request and I have voluntarily left this review.