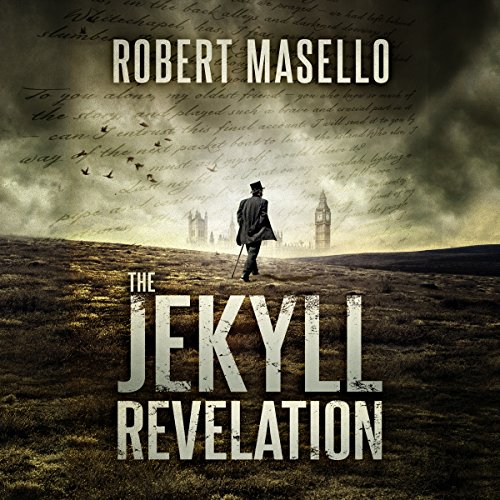 By: Robert Masello
Narrated by: Christopher Lane
Try for £0.00

A spellbinding thriller from the bestselling author of The Einstein Prophecy.

A chilling curse is transported from 1880s London to present-day California, awakening a long-dormant fiend.

While on routine patrol in the tinder-dry Topanga Canyon, environmental scientist Rafael Salazar expects to find animal poachers, not a dilapidated antique steamer trunk. Inside the peculiar case, he discovers a journal, written by the renowned Robert Louis Stevenson, which divulges ominous particulars about his creation of The Strange Case of Dr. Jekyll and Mr. Hyde. It also promises to reveal a terrible secret - the identity of Jack the Ripper.

Unfortunately, the journal - whose macabre tale unfolds in an alternating narrative with Rafe's - isn't the only relic in the trunk, and Rafe isn't the only one to purloin a souvenir. A mysterious flask containing the last drops of the grisly potion that inspired Jekyll and Hyde and spawned London's most infamous killer has gone missing. And it has definitely fallen into the wrong hands.

What listeners say about The Jekyll Revelation

the story was cleverly written, gripping and compelling. the performance really brought it to life. a great listen

What would have made The Jekyll Revelation better?

Would you ever listen to anything by Robert Masello again?

I liked the Canadian hero, but the Scottish accent for Stevenson was a bit strange.

Annoyance, I started to fast forward....

I wasn't expecting much from this book, thinking it would be a schlocky, grocery store paperback. I was pleasantly surprised to find a well written, interesting tale that I actually really enjoyed. The characters were likable and even kind of realistic, and the plot was a lot of fun. I like stories that link past and present events, and the author does that very well, here.
I liked it a lot and I plan on trying other books by the author.

Intermittently reading from my Kindle device, and listening to the synced Audible recording, I quickly became useless in real life - immersed as I was in this story. Crediting both author and performer with my lapse from activity, I'm envious of both. One for concocting the believable and engaging tale and the other for delivering it with such amazing talent as to rival the renown of the story's most celebrated thespian. I will be pursuing both for future, and no doubt, similar and surprisingly entertaining breaks from reality.

I have read a few books from this author and have enjoyed them all. Characters are very intriguing and the story keeps you wondering what is going to happen. This is really two parallel stories that are related to one another so it does go back and forth from past to present but in a very clear and understandable way.
This was a fun book to listen to.

And you thought Dr. Jekyll & Mr. Hyde was fiction

If you could sum up The Jekyll Revelation in three words, what would they be?

Robert Louis Stephenson. He is the center point around which all the rest of the novels, past and present, revolve.

What does Christopher Lane bring to the story that you wouldn’t experience if you just read the book?

Good performance that put you right in the story.

If you could take any character from The Jekyll Revelation out to dinner, who would it be and why?

Stephenson. The character seemed like a likeable working author who got involved WAY over his head.

Because half the story takes place in Victorian times, does NOT mean that it is slow or plodding. This is a fascinating and fast paced read.

I am always concerned that sale items from audible will be a waste of time and money. Not so with this book. I loved it. Good writing, interesting story and perfect narration by Christopher Lane.
I will be listening to more of this author for sure.

One of the most intriguing books

This is one of the most intriguing books and suspenseful books, where every chapter end is a cliffhanger. This is due to the superb writing of two events which are juxtaposed. The vocabulary educates one and the obvious amount of time the author spends in doing research is evident as the story unfolds. A mesmerizing book.

Not my favorite Masello novel

I usually love this author and I still do. This story wasn't my favorite. The characters were well developed, but the story line dragged. Masello has given me enough hours of good reading to try him again though. The reader was great with a Scots accent.

I picked up this book and could hardly put it down. The author does a fantastic job switching between mid 1800's language and modern American English. The intertwined stories and developing mystery make for an exciting, fast-paced read. I couldn't recommend this book enough for people who enjoy mystery, historical fiction, and fantasy.

If you're the kind of person, like me, who's very attuned to spoken language, you may find the narration a bit irksome. Mr. Lane tries to read all of Stevenson's words in a Scottish accent. Unfortunately, he misses the mark many times, making the renowned author sound like he's originally from India instead of Scotland. Lane does an excellent job of narration otherwise. So, this may be a minor point for most audible readers.

I'm very much looking forward to reading more books by Robert Masello. I hope you enjoy this story as much as have.

Could not get into it

Love this genre, but found the story way too slow. Kept trying simply because the narrator is so good, but life is too short and I gave up.

I really liked how the book spanned across two different times. It had a very good plot and the characters were very believable.