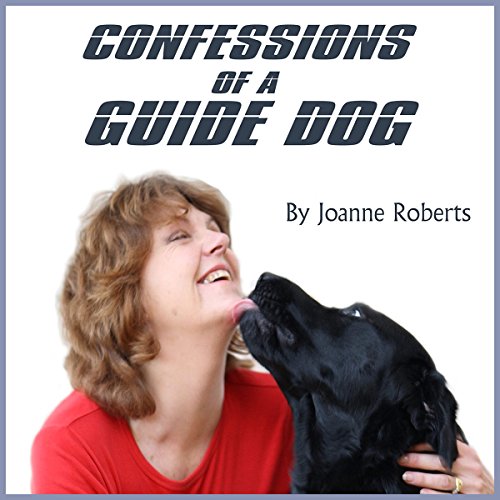 Confessions of a Guide Dog

By: Joanne Roberts
Narrated by: Nicholas Parsons
Try for £0.00

You know the tale of the little girl with a curl, in the middle of her forehead? Well, my guide dog Uska's a bit like that. I only say a bit because when he's good, he is very, very good. But he's never bad, and he's never horrid. He does however, have his moments. Oh, I have mine too. When it comes to being blind, I'm not very good at it, and Uska has to cope with that. I guess some days we drive each other nuts, which is hardly surprising because we truly are a 24/7 partnership. Mind you, I do love the bones of him and not just because he's totally changed my life.

Since I first got him, I've been wondering what is really going on in that head of his, especially when he's working with me in supermarkets, or at parties, or on trains, and even in hospital casualty wards. During the early months, he was the only dog I knew who could make his harness look rakish, like a lovable rascal in an old Hollywood movie. If he'd spent as much time learning to work with me, as he spent on artfully dodging his way to any dropped chips, he'd have been guide dog of the year. As it was, he managed to guide me down the aisle and a rock sliding mountain. He played paramedic for a day and stayed right by my side as my health got worse and worse. All this before he was three years old.

Confessions of a Guide Dog is Uska's version of events, during that extraordinary first year. His "lick-n-tell" memoires are as loyal and loving as a Labrador could make them, but they do come from a dog, and dogs don't lie. Expect some home truths about the human race, blind living, and dog loving, all told with a humor that reflects the effect he has on people around him. This should spread to everyone who reads them. Despite our teething problems, we made it, largely thanks to the training efforts of the team at Guide Dogs. And he did make me laugh; still does in fact. Now he's getting on a bit, he's more precious than ever, so, I'd like to help raise funds for more guide dogs.

What listeners say about Confessions of a Guide Dog

I laughed and cried listening to the book , God bless all involved
Joanne , thank you for telling your story

impressed with this book yes i was

This was a heart-warming story, superbly written and read. Talking as a former (and shortly to be again) Guide Dog owner, this has to be one of the most inovative fundraising efforts for Guide Dogs that I have come across.

Funny and sad, interesting to learn a little of how guide dogs work, pleased she's giving a little back.

loved all of the book

An authentic story of life with a Guide Dog

As a Guide Dog handler, I can say that this book tells the story of what it's really like to live with and love a Guide Dog. I love how this authorportrays the love and selfless devotion these awesome dogs have for us! I'd recommend it to anyone who loves dogs or wonders about the relationship we share with our Guide Dogs!