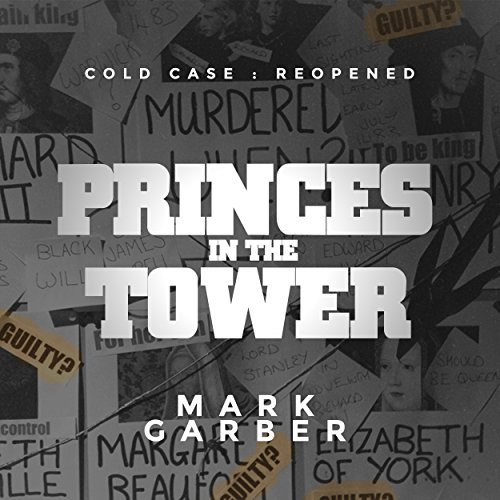 By: Mark Garber
Narrated by: Guy Bethell
Try for £0.00

For centuries one great historical mystery has been capturing the imagination of the world - the fate of the Princes in the Tower.

Shakespeare casts Richard III as the ultimate villain, murdering his nephews in order to usurp the throne. This has always been the traditional view. In recent years alternative theories have been suggested that let Richard off the hook and lay the blame elsewhere. However, with the recent discovery of Richard’s body in Leicester a whole new wave of interest has been stirred in all things related to Richard III. Was he really the child killer portrayed by Thomas More and William Shakespeare?

In this short audiobook, a retired detective reopens this cold case and attempts to piece together the evidence and answer the great mystery about what really happened to the young Princes.

Were they really murdered? If so, what happened to the bodies and who did the evil deed? Or were they left unharmed and left to live out their days in peace? Was a challenging offered up in place of Richard, Duke of York by Elizabeth Woodville and was that why Henry VII was so concerned by Perkin Warbeck?

As the author delves deeper into the evidence he finds intriguing facts including doubts about dental evidence used to determine the ages of the skeletons found in the Tower of London, the fact that skeletons were abandoned for years in the Tower after discovery and details of two mysterious coffins buried at Winsor.

In addition, he highlights the key suspect that no historian seems to even contemplate could be responsible for the Princes disappearance.

Finally he gathers the suspects in one room to revel what he believes really happened. The question is, do you agree?

I have many many audiobooks & rarely listen to them again- except this one. so detailed and really really well done

A balanced and thoughtful account of the brief reign of Richard iii . The main characters of that time are discussed, with the likelihood or otherwise of their involvement in the disappearance of Edward V and his brother, Richard. An intelligent and objective approach to a subject which has been distorted by Tudor historical propaganda, and enshrined Shakespeare's unpleasant defamatory play.

Would you listen to Cold Case Reopened again? Why?

yes I will, lots of facts given in a very professional way

What does Guy Bethell bring to the story that you wouldn’t experience if you had only read the book?

he has a very clear and east to listen to voice

it was all very good

I have always been interesting in the two missing princes and I found this book fascinating.

Too many hypotheses discussed and discarded.

Would you ever listen to anything by Mark Garber again?

No. However, he himself says this is the only book he will ever write.

I got totally lost after a while. I am quite willing to believe that the author is going about this in the same way he would with any murder case. The result, however, is that he takes each character, says why they are suspects, then says why they are not suspects. He does this over and over again, and I just got lost. I just wasn't ready for the mental agility required to follow this audiobook.

I really live this take on what I consider to be one of the most interesting historical mysteries. I love the fresh viewpoint from a retired detective, as opposed to the historical records and historical fiction I’m used to. There were just a few flaws in the logic in my opinion, for the time in which this mystery occurred. The author suggested that Elizabeth of York and her sisters would have been just as strong claimants to the throne, which isn’t really true. Also, I don’t think the author understood how a woman, even a Princess, at that time would have had no choice but to go along with things if a King was interested. Especially if she and her siblings were deemed illegitimate, and her brothers were held in the Tower.

He also suggests that Elizabeth Woodville was “not a likable woman” although I feel that’s a bias from contemporaries. On pure historical evidence, she doesn’t seem to have behaved much different than anyone else in her position would have. Everyone got places for their family, she just had a bigger family than most lol.

I love the conclusion he came to in the end, and i somewhat agree! Although I feel he wrote off a sign if any accomplice. Overall, the writing, narration, and points were great. I recommend for anyone interested in the Cousins War and Tudor periods.

When I was 19 I visited the Tower of London with my family and it was then that I first learned about the murder of the to princes. It is a drama and a mystery that has forever occupied my mind ever since.

This book and it's author built out amazing insight into a very complicated crime. I have always found it amazing how popular believe can win out over factual evidence. The author does a great job, as an investigator, narrowing down the truth and probable motivations.

What I find most helpful about the book and the investigative approach the author uses, is the timeline. Date by date, the author lays out the chain of events from the death of Edward IV
To the Battle of Bosworth and the death of Richard III.

He creates a clear picture of how, as far as we can tell, The events surrounding the murder of the two princes unfolded. It's very clear that most people who believe Richard III murdered the children are jumping to conclusions and not considering all the details of evidence.

The narration made it difficult for me. Too many sentence breaks and pauses. However, (the writer uses that word about every other sentence) the premise was very interesting to me. He approached the subject like a cold case detective, using motive, timeline, opportunity etc as any other investigator would.
If only the Queen would allow DNA testing on those bones....

Excellent & Concise Investigation of The Princes!

This is a very insightful review of what happened to the princes in the tower. Nice narration & very interesting conclusion!

While I'm very familiar with the evidence, I really liked this "modern detective" approach, particularly with the investigation of suspects I had not thought of before. Wonderful listen for those interested in this mystery, or any good mystery for that matter.

Fascinating, well-written and wonderfully narrated. I particularly adore the ending. Such a clever way to wrap it up! Highly recommend!

I love a good mystery

This is a very good audio book. Mark Garber makes a compelling case on who killed the two princes. His evidence was spot on. I believe he cracked this cold case wide open. The narrator kept me glued to the story, usually audio books put me to sleep. I admit I listened to this book twice!

This book is a must listen. The author leads you through the case, right up to his revealing of the logical and obvious suspect. You will be surprised when the name is revealed. It is also the only possible suspect, once you have the facts. This is another book that I've listened to several times.

great job on your first book!!!

Wow!!!!! I've read many historical accounts about the princes in the tower but your book is an eye-opener. " who has the most to gain" ..that should always be the question. Again great job!!!. Now I'm off to see if you've written any more books

I loved the way the detective slowly peals the layers until the unexpected solution.
A must read for any history buff