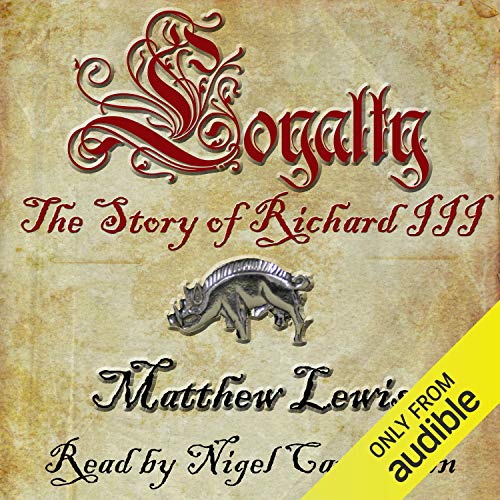 By: Matthew Lewis
Narrated by: Nigel Carrington
Try for £0.00

Born to be nobody.

Destined to be king.

Doomed to be a villain.

Artist Hans Holbein is summoned to the house of Sir Thomas More to receive the commission of a lifetime. He will leave with a secret that could cost him his life. He will learn the truth about the life of King Richard III, the man that the Tudor dynasty has been at great pains to villify. From his return from exile with his brother, King Edward IV, to his rise to become the king's most loyal, most trusted, and most powerful subject. From his flourishing personal life to his seizure of the throne from his nephew. This unfashionable truth is as nothing compared to the reason for hiding it.

Hans Holbein is about to be asked to hide England's greatest secret.

A secret that could tear apart the fragile Tudor regime.

What listeners say about Loyalty

Loyalty by Matthew a Lewis

I have enjoyed this book immensely.Richard emerges as brave and loyal man not without faults,he has a temper and can be impatient but always loyal to his family and his close friends.Listening to the battle scenes I felt as if I was there, sharing in Richard's fear in his first battle as young man then the sadness in the final battle at Bosworth.I enjoyed the tender moments between him and Ann and his conversation with his baby son Edward in the church just after his birth.I like this Richard not perfect but a man of his time who tried always to do his best.Matthew I think offers varying ideas about the fate of the Princes,all of them creditable.Finally praise to the narrator who helped to bring Richard alive.I would love to see this transformed into a drama ,and why not.

Only cried didn't I?

Really gripping and has urged me to research Richard more.
I really think I may have a new obsession developing!

Where does Loyalty rank among all the audiobooks you’ve listened to so far?

What does Nigel Carrington bring to the story that you wouldn’t experience if you had only read the book?

brilliant narrator, doesn't only read the words, he acts out the roles.

Very well written and narrated.
Would highly recommend this for anyone who is a lover of this period of history

I liked the development of Richard's character and the unfolding of the story from this point of view.
The authors attention to detail matched that of Richard. This made the impact of the twists and turns of the story so dramatic and tragic. I loved it!

I am a big fan of the war of the roses and there are many fiction books covering the subject, This one is one of my favourite, I was hooked from the first few lines, the author has certainly got a great talent to keep the reader (listener in this case) interested. The narrator is excellent and brings this story to life. It was my first book by the author and will certainly read his other books.

New twist to an old tale

I have really enjoyed listening to this story and although anything is possible, like all tales of it's kind, no real proof to the contrary has been offered. Reader is excellent and the story well-written.

I found this book so Interesting to have Thomas Moore narrate his tale. I wondered how this would play out, considering his usual damming account. I also loved the theory given questioning the motive of Shakespeares play. I have, as from Leicester, always found intriguing the Woodville and Richard iii dynamics and this story has further whet my curiosity.

A little twist of More!

An interesting 3rd person observation adds a new twist to the Richard story. A super book, very sympathetically read with brilliant characterisation. I thoroughly enjoyed it.

Interesting whether true or not

This story was well told and interesting. The afterword, factual and theory bases, was intriguing.

I wasn't sure at first, but it didn't take long and I was pulled into the story. Loved it!!