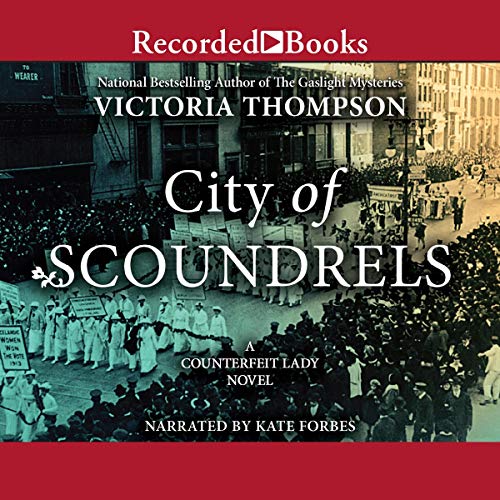 By: Victoria Thompson
Narrated by: Kate Forbes
Try for £0.00

Elizabeth Miles finds herself in a position no con can help her escape. Her beloved fiance, Gideon Bates, is awaiting his turn in the draft to fight in the Great War. Elizabeth is finding it hard to think of anything else, but Gideon has thrown himself into his work, preparing wills for soldiers before they ship out. Corporal Tom Preston is part owner of Preston Shoes, a company that is making footwear for the army, so he has a rather large estate. He needs a new will, however, because he has just been secretly married to a woman whom his family would never approve. He wants to make sure she and their unborn child are provided for if he does not return.

When Tom is later reported killed, Elizabeth and Gideon learn that the new will has gone missing after Tom's bride revealed her identity to his family. Unless the new will is found and validated, the original will, which leaves everything to Tom's brother, will prevail and the wife and child will get nothing. If Tom's new bride survives, that is. Some terrible threats have been leveled against her, and Elizabeth and Gideon must figure out a way, legal or not quite, to secure Tom's fortune for his wife and child while saving her life in the process.

What listeners say about City of Scoundrels

This story just happens to take place in a time where the Spanish Flu was raging. How spooky! The parallels to today's crisis are quite unbelievable, I think those details were even more riveting to me than the main story line! Great book. Thanks, Ms Thompson!

This is my first Victoria Thompson book, loved it. I will now go back and start listening to the series!
I have been making cloth masks for family and friends. A friend who is also sewing masks texted that she was hearing a book that dealt with the Spanish Flu and everyone was wearing masks!!
Thankfully that was in the background at the beginning and Ms Thompson delighted me with a fun story!