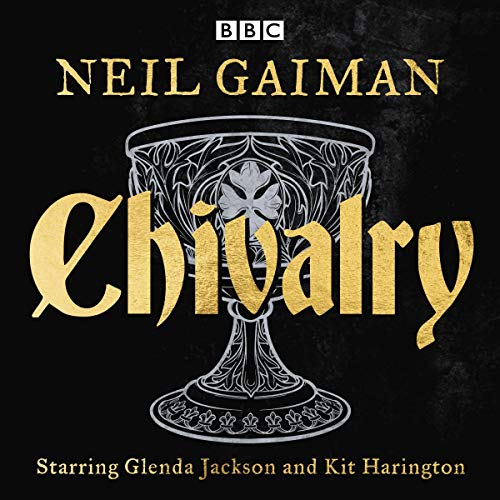 Mrs Whitaker just wants to have a chat with her dear friend Mrs Greenberg over homemade macaroons. But her charity shop find soon makes her the focal point of a most important quest when a handsome young man - who says he’s called Galaad - comes asking for the Grail.

This sound designed, multi-voiced reading is an extended cut, including material not heard in the radio broadcast, and is introduced by an exclusive interview with Neil Gaiman.

Starring Glenda Jackson as the Narrator and Mrs Whitaker, and Kit Harington as Sir Galaad.

Written by Neil Gaiman
Produced and Directed by Allegra McIlroy

What listeners say about Chivalry

Loved the story and also a great performance. So why only 1 star ?
After the introduction was only left with a little over 20 minutes of story, priced at £17.99 that is nearly £1 a minute.
Message to Audible.....Everyone is wearing a mask right now but not the highwayman type.

Joys of the charity shop

Simple yet spellbinding. Leaves you wanting more and to visit an oxfam shop at your very next convenient opportunity

really enjoyed the performance but author introduction goes on too long. If it had been at the end of the recording then I would have found it more useful, but as it's at the top I had to skip large parts of it to avoid Neil giving away the plot!

Neil Gaiman introduces a whimsical, heartfelt story that ties to his relationships with the elderly matrons of his life and what it would be like if, as an old person, you were given the chance to be young again.
This is a simplistic story that was clearly designed as a new age fairy tale with classical elements from tales of chivalry, but as with the Sleeper and the Spindle, this story is introduced with a personal anecdote and background segment by the author himself.
This is a short and sweet story that is under 40 minutes, so one to be enjoyed in the span of an afternoon walk.

witty acerbic and dry gaiman at his best