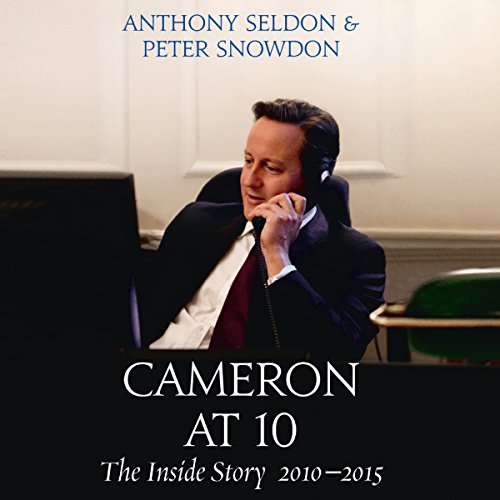 Five years in the making, Cameron at 10 is the gripping inside story of the Cameron premiership, based on over 300 in-depth interviews with senior figures in 10 Downing Street, including the Prime Minister himself.

As dusk descended on 11 May 2010, David Cameron entered 10 Downing Street as the youngest prime minister since Lord Liverpool in 1812. He stood at the head of the first Coalition government in 65 years, with the country in dire economic straits following a deep financial crisis.

From the early heady days of the Rose Garden partnership with the Liberal Democrats to the most bitterly contested general election in years, Cameron at 10 highlights 40 dramatic moments in an exceptionally turbulent period in British politics.

The book contains all the highs and lows on the domestic front as well as providing revealing insights into the Prime Minister's relationships with foreign leaders, particularly the German Chancellor Angela Merkel and US President Barack Obama.

With unprecedented access to the ‘inner circle' of politicians and civil servants that surround the Prime Minister, from Chancellor George Osborne and Deputy Prime Minister Nick Clegg to all of Cameron's personal team, this is the most intimate account of a serving prime minister that has ever been published.

Praise for Cameron at 10: "Explosive...authoritative yet uncompromisingly tough...a gripping and at times astonishing account of the people who rule us." ( Mail on Sunday)
"These pages are a masterclass in so-called “tick-tock” narrative – a minute-by-minute account, studded with detailed recollections and observations...A formidable achievement...Magisterial...If I were Mr Corbyn, I’d get busy reading." (Matthew D’Ancona, Evening Standard)
"While Lord Ashcroft may have started a brief craze for pig jokes...The more interesting (and damaging) disclosures come in the other new book about him, Cameron at 10 by Anthony Seldon and Peter Snowdon." (Fraser Nelson, Telegraph)
"Rigorously researched, giving an insight into the inner workings of Cameron’s No 10 and the coalition that we have not seen before...While Ashcroft and Oakeshott’s Call me Dave should by no means be dismissed, ultimately the offering from Seldon and Snowdon feels a far more substantial look at an intriguing political leader." ( Independent on Sunday>/I>)
"An immensely thorough work...it contains a more damaging passage than any in their rival's unauthorised work." (Dominic Lawson, Sunday Times)
"A substantial piece of work – a blow-by-blow account, impeccably researched and carefully documented, of the highs and lows of the first Cameron administration. The authors appear to have enjoyed almost total access. Their judgements are on the whole balanced and the narrative compelling." (Chris Mullin, Observer)
"A monumental first draft of history." (John Rentoul, Independent)
"Where Seldon excels is in his understanding of political relationships. Seldon and Snowdon are adept at convincing friends and colleagues to talk candidly." (The Times)
"Seldon and Snowdon are particularly strong on foreign policy...Cameron at 10 is an invaluable resource." (Daily Telegraph)
"Measured and thoughtful...Cameron at 10 is a fascinating book." (James Bloodworth, Daily Beast)

Great insight into some of the biggest political events of the coalition government, very easy to listen to, covers a wide range of topics and keeps you interested throughout.

NOT well narrated. Like listening to a satnav with some bewildering pronunciations - of names, places and even political parties. Weird intonation and use of emphasis.

Narration was very good, well spoken and engaging
the story is of the first coalision government since 1945 and the minute by minute account of this progress from 2010-15
the book was well written and was sustained my interest for over 19 hours
overall a very interesting modern political history

Does what it says on the tin, with no messing around.

A well researched and factual historical account, but rather dry and matter of fact in tone.

I found it useful because it filled in a lot of gaps, and there was no partisan editorial voice to get in the way. A good listen, worth the time.

I'd forgotten what a self-regarding, preening guy he was; he seems to have screwed up quite a lot of things - Libya, Syria, almost losing the Scotland referendum, EU relations, the NHS etc etc. He was lucky that he was up against the wrong Miliband brother and had the Lib Dems to hold him back a bit. Its a good listen and is actually quite sympathetic towards David but the litany of one screw-up after another speaks for itself.

Firstly, the narration is far too quick. This is easily fixed by slowing down the speed to 0.75x normal speed, which makes it easier to take in what is being said.

The overall impression of both Cameron (also Clegg) were too inexperienced & out of their depth, to run the country well.
Like so many politicians, they come across as mere tacticians, obsessed with short term popularity & out-foxing their opponents.

It's also notable from this book how little influence the Lib-Dems had on policy, and what lightweights they were.

The influence of Special Advisors is a concern, after hearing in this book just how much influence & power they have.

If you're interested in politics, then this book is worthwhile. Although I found it quite heavy going at times, so spread it over quite a few weeks, with just the occasional hour or so of listening. That made it bearable!

It's a useful historical record. Better than a political memoir from a politician, as it's more balanced.

good for those interested in 2010-15, quite general in nature but get easy to listen to, a good history lesson.

Had good insight in to the Conservative side of the coalition government. Went to an emotional level of detail which was good. Did occasionally feel like it was a piece of pro-cameron propaganda. Could have been more balanced

Unfortunately left a lot of the questions raised in the foreword unanswered and me without a clearer sense of Cameron's personality.
Much is handled as fact which I thought can only be speculation
Of course in a book I could see if there are references to justify claims being made
After two autobiographies of politicians this seemed weak
Narration too much like a long news read which I found difficult to focus on