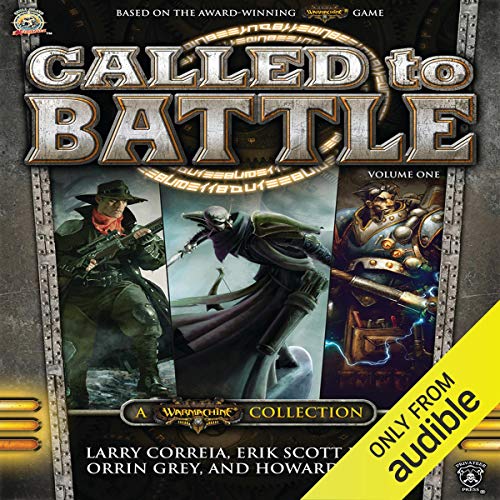 Called to Battle, Vol. One

The Iron Kingdoms is a land dominated by mighty warcasters, arcanists who command the terrifying war machines called warjacks. While these epic figures lead armies and shape the futures of their nations, other powerful individuals, no less skilled, forge their own destinies in steam and steel.

Called to Battle is a collection of stories focused on the Iron Kingdoms’ unsung heroes, its skilled mercenaries, and even the horrifying villains who haunt its darker reaches. Track a target through the frozen north with Kell Bailoch, a deadly sharpshooter who kills for the highest bidder; hunt down a group of corrupted human magic users with Narn, a merciless Iosan mage hunter; uncover a sinister sabotage plot with Arlan Strangewayes, Cygnar's premier arcane mechanik; and endure a terrifying journey into the mind of General Gerlak Slaughterborn, a monstrous blighted trollkin with a penchant for devouring his enemies whole and screaming. These stories draw you deeper into the wartorn landscape of western Immoren and the Iron Kingdoms, where heroes, villains, and those somewhere in between find themselves Called to Battle.

What listeners say about Called to Battle, Vol. One

Normally this is something that I could totally get behind. This on just never engaged me. Well written & performed. No real complaints so I won’t be getting my credit back.

Yes. Each story has solid action scenes. They all are cast in that strange forbidding world called the Iron Kingdom inhabited by gritty warriors trying to annihilate each other, puny humans trying to stay one step ahead of human grubbing monsters and fed up mercenaries tasked with shutting up and shutting down a bunch of self absorbed mages.

What other book might you compare Called to Battle, Vol. One to and why?

"The Butcher of Khardov" by Dan Wells springs to the lips. Both books are set in similar settings with Warjacks running around creating havoc controlled by hard-bitten uber warriors. That blood crazed maniac Orsus Zoktavir from "Butcher of Khardov" could exist and probably do quite well in the Iron Kingdom. Hell, I'd back him with a chunk of change if went up against General Gerlak Slaughterborn - the thoroughly evil badass and all around bully from the third story in "Call to Battle". It would be a match you wouldn't want to miss.

Which character – as performed by Bronson Pinchot and Ray Porter – was your favorite?

My vote has to go to General Gerlak Slaughterborn for just having that name. Huge call author! Talk about effortless cred among the boys down at Annihilator's All You Can Slaughter Then Eat While Still Twitching 24 hour Cafe or some other joint frequented by Gerlak's cronies. With a name like Gerlak Slaughterborn you are pretty much guaranteed shotgun seat every time, everywhere in everyone's ride. If you try some pathetic RPS move, by the time you stick out your skinny twig of an arm old Gerlak Slaughterborn is already digesting the larger portion of your upper torso. This man is not to be trifled with.

Yes, and I did. Book wasn't too long, and the stories just buzzed along.

Get this book if you like stories that feature crossbow shots through eye sockets, thoroughly slashed throats, exploding Warjkacks and eagle eyed sharpshooters blowing the heads off of homicidal mages. Also, you won't have to slog through endless hours of meandering backstory to get to the first whizzing bullet or war axe skull thwack with this book.

all four stories are well written and professionally narrated stories that will be a quality addition to your virtual bookshelf.

Warjacks and Arcane energy in the Malcontents univ

Stories of battles won and lost.

An amazing collection from amazing authors.

Only the first was worth listening to.
It's like the authors said, "Hey let's write a collection about Anti-Hero's and bad endings. Won't that be fun."
The last one especially made me want to pull out all the stops when it comes to expletives." What kind of snot-vomit is this? It's like a used bumm wad rolling across from the dumpster, thru the front door and onto your nice clean carpet.
Really, like I don't have better things to do with my time?

What a head Trip

The title caught my eye as I love the Iron Kingdom role playing world. I picked this up as I saw that Larry Correia's writings where part of the features in the book. I wasn't disappointed at all and learned there a few more authors that I need to add to my book list. This sent me into a world of War Jacks and Spell casters which is one of my favorite things to read about.