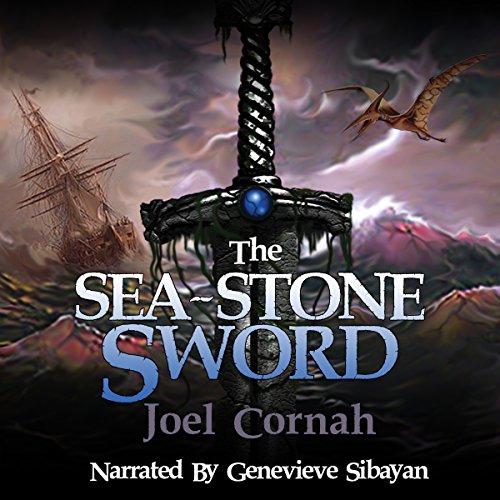 "Heroes are more than just stories, they're people. And people are complicated, people are strange. Nobody is a hero through and through, there's always something in them that'll turn sour. You'll learn it one day. There are no heroes, only villains who win."

Rob Sardan is going to be a legend, but the road to heroism is paved with temptation and deceit. Exiled to a distant and violent country, Rob is forced to fight his closest friends for survival, only to discover his mother's nemesis is still alive, and is determined to wipe out her family and all her allies. The only way the Pirate Lord, Mothar, can be stopped is with the Sea-Stone Sword - yet even the sword itself seems fickle, twisting Rob's quest in poisonous directions, blurring the line between hero and villain. Nobody is who they seem, and Rob can no longer trust even his own instincts.

Driven by dreams of glory, Rob sees only his future as a hero, not the dark path upon which he draws ever closer to infamy.

What listeners say about The Sea-Stone Sword

A well-narrate story about a quest going nowhere

*spoilers possible in discussion part*
Summary: A boy with grand ideas of being a hero finds the path much more complicated than the stories make it out to be.

Additional Comments:
- I fantasy books because they bring the reader to faraway places. This book was no exception in that regard. It contained quite a few neat world-building aspects, but there were also some major things I didn’t connect well with, which is how it ended up with an average rating (3 stars = it’s okay).

The Bad (I hate ending on negative points, so I’m going to start out with the things I struggled with).
- The book took me a long time to get through, even in audio form. That’s generally an indication that I’m just not that “into it.” Here are some of my major disconnects.
- I didn’t like the main character. I get from the blurb that the author wants this to come across as a gritty, realistic, life is messy sort of commentary, but I really like being able to root for the MC. Rob just annoyed me 90% of the time.
- Pacing – timeline and event flow didn’t seem smooth to me. That could be my fault as a reader/listener. Not sure. I remember being about a quarter into the book and being like “what? Who just died? Who the heck’s that guy?”
- Lack of Closure – There’s always a delicate balance to strike. Ending with a lot unresolved is a tactic to get most people to buy the next book, and maybe it works. But after 11+ hours I find the way it ended very annoying.
- Bad guy’s motives come across clear as mud. The amount of effort he goes through to manipulate events would be fine if something like world domination or promises of loads of wealth were at the heart, but that’s not the case.

The Good
- The narrator did a fantastic job of bringing the world to life. I would most definitely listen to other works she takes on.
- The world-building is cool with multiple races.
- The plot has some neat twists.

The Neutral
- Not sure picking a female narrator was the way to go with the MC being a 14 year old boy. On the other hand, many of the other characters were female.
- There’s multiple interesting races, though I will say most of them came across as stereotypes of themselves. i.e. all Penguish (sorry about spelling, I heard the audiobook) are ___.

Conclusion:
It’s okay. If you enjoy complicated fantasy (narrated very well), this might fit the bill for you. But if you really need closure in stories, avoid.

*I received a copy of the audiobook. I freely chose to review it.

I think this story maybe wasn't what I was looking for- a bit darker than I was expecting. I did like the action/adventure and the characters were interesting, the story well written and the narration was really well done.


I was given this free review copy audiobook at my request and have voluntarily left this review. The fact that I was gifted this book had no influence over my opinion of it.

The main character is good and the main story is OK. There's a lot of action in this book, but also a lot of brooding introspection. I did like the narrator, she did a great job.

This audiobook filled with adventure and will keep you listening until the bitter end. Full of dark and heroic adventure, you grow to feel the emotions of the main character Rob but also of those he friends along the way in this strange world he lives in. But lessons learned for Rob, is it worth becoming a legendary hero or just one who is there to help?

This book maintains an overriding theme that Heroism is bad. Although this does not make a book in and of itself bad, it is not something many fantasy readers including myself are hoping for. Therefore I have tried as best I can to eliminate my personal bias from this review.

The narrator does a good job switching voices. Her natural accent lets her change easily from low class to sophisticated or educated. There are man rich areas discussed and ech character is also rich enough to be deserving of a story in it's own right. Unfortunately all of this richness is wasted.

The author seems to be almost obsessed with showing the virtues of Nobility, Courage, and Heroism as futile, self-serving, and ultimately more destructive than helpful. Additionally anyone who survives long enough to serve as a mentor to or give an opinion on heroism, has been abused or otherwise traumatized, such that their viewpoints are wrapped and twisted. Because of this all of the rich areas and characters are touched on only long enough to serve as disposable object lessons or examples to that end. Unfortunately, since this is repeated throughout the book, it does not allow the audience to form any proper attachments to these people or places and it makes even the most intense moments of the book dull and anti-climactic as the author's theme repetition makes the outcomes of any encounter predictable.

I had high hopes for this book and it honestly didn't deliver as I had hoped. For me, the story went on and on without a purpose. I never really felt like I knew where the story was trying to lead me.

With that being said, I enjoyed the narration. I think for the book, the narrator did an amazing job with what they were given. I probably wouldn't pick up another book from the author, but I definitely would listen to the narrator again.

A good story but it never hooked me

This is one I probably would have liked better if I had read it instead of listened to it. As is often the case with me, I had a hard time keeping my mind from wandering. I found the protagonist a little annoying in the beginning. He's a child who keeps insisting he's the greatest fighter in the world and that he could kick everyone's butt. The only thing he was missing was Scrappy Doo's puppy power battle cry. After getting slapped around for the dozenth time, he finally admits he isn't all that just yet. I liked the narrator's voice. She did a great job reading and instilling emotion into all of her characters, but as a female narrator, her range of voices was limited, so it could be a little difficult to differentiate characters, but not overly so. She did a good job of changing inflection and speech pattern, enough for most people to manage.

A good but dark and brooding fantasy story

This is a very grim look at an adventure story. The story is well written, but things take a turn for the worse for the main character so often it becomes a bit too dark and broody for me. That is most likely what the author was going for, but I like my dark and broody to be balanced by snark and humor so it's not so heavy on the pallet. The narrator did a decent job on the voices, but her voice was a bit too breathy for me for Rob. In my head, I expected a much gruffer voice a fighter like the main character. Again, that's just my opinion.

This book takes the typical &quot;becoming a hero&quot; story and completely changes the treatment. Instead of seeing a &quot;band of brothers&quot; going on a quest and defeating monsters and saving the day and becoming legends, we see the grim reality side of the quest to rise above the mundane. It explores the struggle between good n evil, not only in the world outside but within every one of us. It shows how even if you start with good intentions and give it everything you've got, the outcomes might now always be under your control or be what you expected it to be. We see good turning into evil and struggling to regain some resemblance of civility.

All that said, it does get overwhelming. The numerous turn of events and epic struggles the characters go through weigh heavy on your mind. It is sorta depressing really. You wish the world was a little more cheery. But that would've probably defeated the mood of the storytelling.

I guess people who like to read about struggles in life and grey characters will absolutely love this heavy book. It was sorta too much for me.