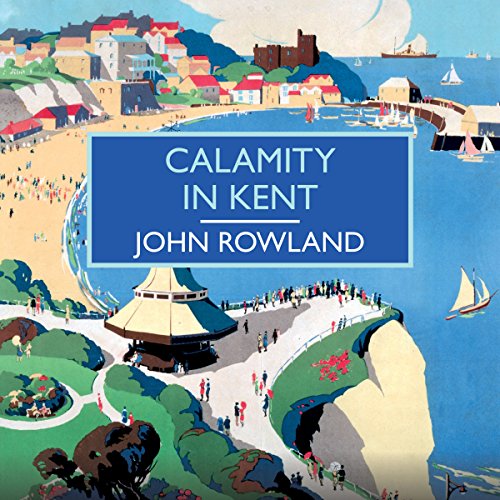 By: John Rowland
Narrated by: Peter Wickham
Try for £0.00

In the peaceful seaside town of Broadgate, an impossible crime occurs. The operator of the cliff railway locks the empty carriage one evening; when he returns to work next morning, a dead body is locked inside - a man who has been stabbed in the back. Jimmy London, a newspaper reporter, is first on the scene. He is quick on the trail for clues and agrees to pool his knowledge with Inspector Shelley of Scotland Yard, who is holidaying in the area. Mistrustful of the plodding local policeman, Inspector Beech, the two men launch their own investigation into the most baffling locked-room mystery, a case that could reignite Jimmy's flagging career, but one that exposes him to great danger.

What listeners say about Calamity in Kent

Nothing, I'm afraid. Peter Wickham is one of my favourite narrators, the reader of the UK releases of Steven Saylor's marvellous Gordianus novesl (which - hint, hint! - it would be a pleasure to hear again as Audible downloads). But not even he can inject any life into this feeble story.

What was most disappointing about John Rowland’s story?

The story is told by Johnny London, a journalist recuperating from an unspecified illnesss (at least it hadn't been identified by the time I gave up the book). I did wonder if his flabby prose and impoverished vocabulary was the author poking fun at downmarket newspaperese - for example, in the course of the book's first 45 seconds or so, London meets a man who is "acting queerly"; has "something queer, almost grotesque, about his appearance" and is wearing spectacles that add to "the queerness of his appearance". ("Queer" here is, of course, simply a variant of "peculiar" and as such often used by writers such as Agatha Christie and Gladys Mitchell - but used sparingly. But Rowland uses it so often that even if he intended it as a joke it very soon wears thin. A good writer would have recognised that and even if he hadn't his editor should have done.)The friendly relationship between Johnny London and one of the policemen is unconvincing (in her early books, Ngaio Marsh also lumbered her inspector, Roiderick Alleyn with a journalist companion, but sensibly discarded him.)

What aspect of Peter Wickham’s performance might you have changed?

He did his professional best! No blame attaches to him.

Disappointment, obviously. I've enjoyed many of the British Library Crime Classic series, and the helpful introductions by Martin Edwards. But even he admits that the explanation for the cliff railway carriage conundrum lacks the ingenuity that should reward the reader of a locked room mystery. I took him at his word and didn't bother to skip through the book to find out what it was.

The British Library Crime Classics have lovely, evocative period covers.....but in this case "don't judge a book by its cover" was all too true.

What disappointed you about Calamity in Kent?

I love an old fashioned mystery but this is dull. Also main character is silly and irritating

Did Peter Wickham do a good job differentiating each of the characters? How?

A fairly average read. Rather too much explanation of the main characters thoughts and actions, and leaves too little space for the reader to work things out for themself.

Fun mystery, good twists and interesting characters. I true mystery in which you don't really know who did it.

This is my favorite, so far, of Rowland ‘s books. I’ve always read his others but now want to listen to them all if Wickham is narrating.
I just discovered Rowland recently when I came across the British Library Crime Classics, published by both Poisoned Pen Press in the USA and by British Library in the UK. These are Golden Age Mysteries, published from as far back as the turn of the Century— 19th to the 20th — but became popular between

Not worth the time or effort

What disappointed you about Calamity in Kent?

The story is dreadful; the conclusion poorly developed. I found the charters an annoyance.

What could John Rowland have done to make this a more enjoyable book for you?

Who would you have cast as narrator instead of Peter Wickham?

The narrator's voice had a rasp; sad to say, it sounded like he was chain smoking throughout the reading.

If you could play editor, what scene or scenes would you have cut from Calamity in Kent?

A forgotten post-war author who should remain forgotten.