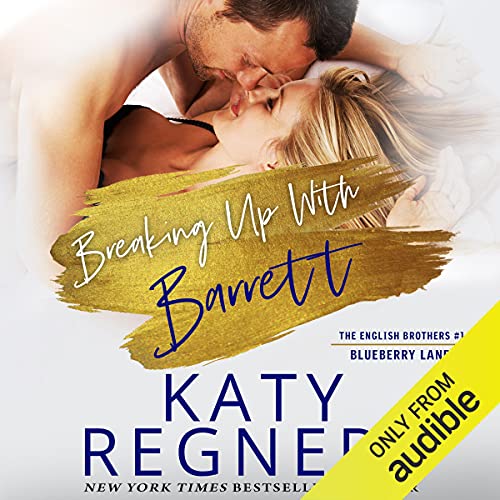 Breaking Up with Barrett

By: Katy Regnery
Narrated by: Lauren Sweet
Try for £0.00

Breaking Up with Barrett is the first of six books about the Philadelphia-based, wildly handsome English brothers who are all on the lookout for love.

(Except Alex. He's a womanizing manwhore. And maybe Stratton because he's wicked hot but super awkward around girls.)

Barrett English, aka "the Shark", is the fair-haired firstborn of the English brothers and the CEO of the oldest, most prestigious investment banking firm in Philadelphia. He rules the boardroom with an iron fist, refusing to take no for an answer and always getting his way.

Emily Edwards, a first-year doctoral student at the University of Pennsylvania, grew up in the gatehouse on the outskirts of Barrett's childhood estate. The daughter of his family's gardener and housekeeper, she was always looking through the window of privilege but forced to remember her place at the very periphery of the kingdom.

When business partners suggest that a fiancée might soften Barrett's image over business dinners, he approaches Emily for the job of fiancée. And while love isn't necessarily on Barrett's radar, he begins to realize that Emily always has been. But will his take-no-prisoners boardroom tactics work on the heart of the woman he loves?

What listeners say about Breaking Up with Barrett

A great start to this series

A great start to this series and an awesome 'rags to riches' story.
I loved the cat and mouse games that are so cleverly played out between Emily and Barrett. This is a love story that goes back to their childhood and endures until they are old enough and mature enough to recognize it and do something about it.
Beautifully narrated and a very entertaining listen and page turner


After I listened to the audiobook The Vixen and the Vet: A Modern Fairytale, Book 1 by Katy Regnery, I immediately went on a hunt for anything written by her. Unfortunately, there is only one other audiobook available at this time – Breaking Up with Barrett.

This is a sweet romance about two kids who grew up together, Barrett English considerably older than Emily lives grew up in the big fancy house. Emily is the daughter of the English families gardener and his wife, the English families maid. So it sounds like, but isn't, a Cinderella story, nor the run-of-the-mill billionaire Alpha and his submissive young sub.

Emily is in doctoral school and the bills are piling up. Things are looking up when Barrett makes her an offer she can't refuse. Pretend to be his fiancé, on occasion, so that he makes a better impression in social settings. He pays her well.

Everything seems well and good until Emily starts recognizing that she has feelings for him. She does not want to be paid while becoming physical with him – if that is possible. The story progresses from there, with a few twists and turns.

This is a nice book with tension building up. It is not complex or an exceptionally deep plot. It is very nice, something to listen to on vacation or on a rainy weekend.

The performance was excellent and without fault. Lauren sweet sounds very professional and made it a great listening experience.

I do not remember if I used a credit or purchase this out right – – I recommended either way.

Did you find this review helpful? If so, would you please take a moment and select yes below? Thank you.

This story, short and sweet... really, scared me a bit when I thought at the end there that Emily was really going to break up with him. Emily and Barrett is so perfect together. She is absolutely sweet through and through & Barrett is so serious and intense. JJ was right when he said every man needs a good woman behind him or he'll be lost.

I try never to be negative, although I must say the book was dead at the beginning. Authors should take note... an audible can be made or broken e n by a narrator. Pick wisely! The narrator was unrealistic. S he's definitely not an Emma Thompson. But this book was flying to begin with. A waste of credit it's sad to say.

I thoroughly enjoyed Barrett & Emily's story. They are such a good couple. As they say Emily 'softens' Barrett's 'rough edges'. She humanizes him. I look forward to Fitz' story next.

Lauren Sweet is an excellent narrator for this story.

This was such a refreshing book. I loved both characters, and how both of them thought for each other. I am anxiously awaiting the next reads in this set.

Breaking Up With Barrett is a really enjoyable, friends to lovers, fake fiancé, sweet romance. I loved Emily and Barrett “the Shark” definitely needed the influence on a good woman like Emily to make him a better man!

“The reality was that he was accustomed to getting exactly what he wanted, and for as long as Emily Edwards had drawn breath, Barrett English had wanted her.”

I’ve only read a few of the Blueberry Lane stories, and I’m reading them completely out of order, but the stories hold up as standalone and I’m liking them all.

I listened to most of Breaking Up With Barrett on audiobook and enjoyed the narration.

Breaking Up with Barrett

An adorable romance. I thoroughly enjoyed this story. This author is new to me and I am looking forward to continuing the series.

♥ ♥ ♥ ♥ I found this to be a sweet and simple kind of story. I love the plot of always being in love or attracted to the person, and deciding finally to do something about it, only to realise the other feels the same way! I also liked that there was potential for the “grand misunderstanding” which, I thought for sure was going to happen and didn't, thankfully, as just the thought that it might, had me rolling my eyes.

Barrett was a caring, sweet guy, a bit on the over doing it side.. but I still enjoyed his character. Emily was nice and somewhat level headed I thought. Even though my review of these characters sounds kinda super sweet and mushy.. it wasn't so sweet that it will give you a cavity!

The narrator was clear and decent, though sometimes emphasized word "the" when it shouldn't be. This however, was not something that would make me stop listening to her. I plan on reading the others in this series as well.