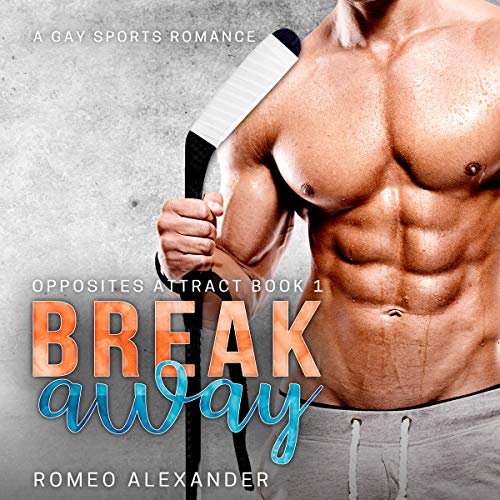 With Sam’s help, I’d improve my grades and stay on the team. What neither of us expected is that after studying, there was more I could teach him.

After Jayden’s father died, he felt lost and alone. Nothing made sense to him anymore except for the ice and skating. It was there he could lose himself. With playoffs approaching, everything he had worked so hard to achieve was in jeopardy.

With stunning blue eyes shining behind glasses, timid and unsure, Sam came from an opposite world from him.

Sam’s job was to help Jayden improve himself. Jayden’s job became to show Sam who he really was. As much as neither of them ever wanted to admit it, they both needed someone.

Breakaway is a gay love story with characters who come alive and stay with you long after the story has ended. This story may take place on the ice, but its details are steamy and hot.

What listeners say about Breakaway

The story was ok but the narration was all over the place. First of all there was so many accents. I felt like his friends were from Sesame Street to Arnold Schwarzenegger. Also I can tell he has potential but if wanted to refer him to a friend to listen to I can’t remember his name to pronounce it. He should use an initial or a shorter name. Narration can make or break a book. I don’t read I’m addicted to audio so it’s a big deal to me and too a lot of listeners. I was on the fence to wether or to leave a not so great review. I tried contacting the narrator but no response 🤷‍♀️

The story is very well written, but I just couldn't get past the narrator's voices for a couple of characters, particularly Sam's roommate sounding somewhere between a tween Morty (from Rick & Morty) or a bad Mickey Mouse impression.

I just love these stories of young love. They warm my heart. This book was really good so I hope you go check it out.

Horrendous voice for the book.

2 sec in The higher sounding voice didn't do it for me. Had to go back to the text to speech Joey voice

My favorite troupe ..the nerd/athlete. A cute short story about a couple who over come a few prejudices. The narration could have been edited better, there was a few times the sentences were repeated.

What's hotter than a gay man (men) in sports??? Nothing!! Sweat and pur exposed muscle- swooning!! I enjoyed the opposites attract theme too. Jayden's team support and comraderie was awesome. Sam's roommate just irked me! I was glad such nice guys got their hea. Great message and storyline. I voluntarily listened to a free copy of this and am giving an honest review. The narrator did a good job bringing it to life.

I really liked this Gay Sports Romance and I liked that the main character, Jayden was already ‘out’; it made for a refreshing change to sports romances I’ve been reading. I really liked Romeo’s ‘twist’ that the nerd was the one not ‘out’. I loved both main characters but found them best when they were together! I loved that Jayden would jump to Sam’s defense even before they develop feelings for each other. The story is short and sweet and leans towards insta-love with emotions becoming entangled quite quickly. Jayden’s a totally loveable jock who thankfully is nothing like the negative stereotype and he and his supportive teammates provide for a great story. A great first-time, insta-love, sports romance!

Now the narration for this was interesting. The narrator had a new voice for every character and they differed so much! I’m not sure the narrator meant for it, but their voices made the whole story so much more entertaining, even when it probably wasn’t meant to be. The Hockey team was made us of so many different accents, I felt like there was a Russian, Jamaican, American, and even possibly a little English and Kiwi in there. It makes for an entertaining listen! I must say the Librarian did kind of sound like a parrot which was a shock the first time I heard it. I’m an avid audiobook listener so I’ve heard all sorts of voices and obviously have my favorite narrators, so with this narrator being so different it did throw me off to start but once you get in the flow of the story, the bizarre accents fall away (or make you laugh) and the core of the story comes through. I loved the story and the narration made it unique.

A geek and a jock, the geek tutors the hockey player, who's not the stereotypical jock, though...
Sparks fly and the story which developes is nice and funny and light, and it's a couple of hours of great entertainment.
Sam is stronger and more resilient that we would expect, just as Jayden is just a giant softie!
Romeo Alexander is a new to me author and Kaeomakana Tiwanak is a new to me narrator, but I really appreciated both their talents.

New to me narrator who does a really good job with his characters voices. Jayden is an Ice hockey player who needs to bring up his grades, In comes Sam his tutor who turns out to be more. I really enjoyed the side characters especially Sam's sister and her son. The team support was also done well, except for the 1 who was out to hurt Sam. Well written

The narration was not too bad. It definitely improved as the story went along. Some of the accents were weird but luckily they were few and far between.

Jayden is a star hockey player who needs a little help in one of his classes. Sam is the D&D playing, comic loving tutor tasked with helping Jayden.

The relationship that forms between these two is very believable. I enjoyed the story. The plot was well developed and executed given its length.

~*~I received a promotional code~*~