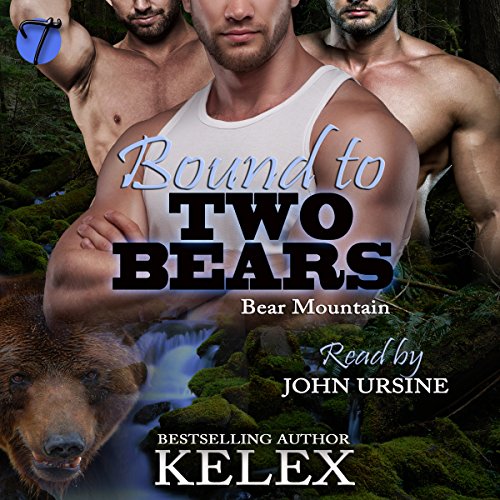 Newly dumped Carson Davies decides the vacation he'd planned to take his girlfriend on - in hopes of fixing their troubled relationship - is the perfect getaway he needs to clear his head. A few days of solitude, hiking along picturesque Bear Mountain, is just what he thinks he needs to move on. But as soon as he arrives, he's shocked by the sensual reaction he has to the two owners. The two male owners. Carson has never been attracted to a man, and he fights the sensation tooth and nail.

Royce and Jared know their mate as soon as he walks in the door of the main lodge. They're ready to claim what's theirs, but know they need to be careful. The man sees himself as straight, but that's the least of their problems. They'll need to show him their true nature, their inner bear, and hope it doesn't send the man packing.

The shifters have just three days before the human is scheduled to go home. In a short span, they've got to show Carson how bound they all are and hope they can seduce the man into surrendering.

What listeners say about Bound to Two Bears

hmm audio was the wrong choice

the cover and story implies youthful or non-senior characters. so with that picture in mind and the narrator's voice, i couldn't get into the story . those two things warred with each other so much that it distracted from the story. sorry

This story is an insta-fave!

Kelex is a relatively “new to me” author, but I have to say I’m digging what she writes. I read a couple of her Omegaverse books before this one, but this does tick a lot of my M/M shifter boxes. The plot wasn’t overly complex, there was little angst, great smexy times (and a good amount at that), equal bear vs. man time AND the writing was actually good. I’m not a huge fan of BDSM, but what is in the book is lightly glossed over and it doesn’t completely take over the book with limits, safewords, etc. And then, BAM...a dash of mpreg at the end. Seriously...this all is shifter crack to me and I have every intention of continuing the series in Kindle and probably everything else Kelex has ever written.

That said, yeah...the narration is pretty bad. I got that immediately from the sample, but sometimes you have to take the bad with the good. Do I want to listen to this specific story in audiobook format? Yes, and I realize this is all I’m going to get, so I’ll deal with the crappy voice.

Also, a hopeful note for the author. I hope she wasn’t discouraged from Audible with the underwhelming reaction from this one. Audiobooks are becoming more and more popular and I, for one, will purchase anything Kelex puts out. The rest of the bear mountain books? Yep. Her Omegaverse books? I’ll be all over those. I just hope she springs for a better narrator. Good ones like Sean Crisden, Joel Leslie, and Greg Boudreaux have quite the following and would expose her stories to so many new eyes.

I enjoy the story line always good to have mpeg story in my library, but the reader was not as good as he could have been and he make it hard to keep up with different character. I will keep my eyes out for more audible by the reader, because it helps me to get through my day at work.

Loved this book. This is book one and was so good. I have read all the books in this series and loved everyone of them. Can’t wait for more.