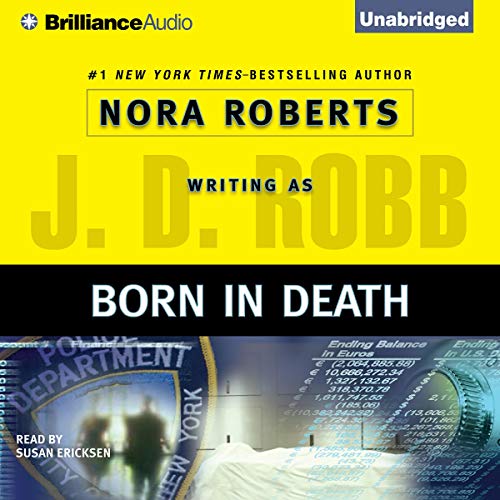 Lieutenant Eve Dallas struggles with the end - and the beginning - of life in this thriller in the #1 New York Times bestselling In Death series.

Just as Eve Dallas begins to investigate the grisly double homicide of two young lovers - both employees of the same prestigious accounting firm - her friend Mavis need a favor. One of the moms-to-be in Mavis’s birthing class has gone missing. Normally, such a case would be turned over to Missing Persons. But Mavis wants no one else on the job - and Eve can’t say no.

Now Eve’s trying to track down the missing woman, while simultaneously unearthing the deals and double-crosses hidden in the files of some of the city’s richest and most secretive citizens, in a race against this particularly vicious killer. Luckily, her multimillionaire husband Roarke’s expertise comes in handy with the number crunching. But as he mines the crucial data that will break the case wide open, Eve faces an all too real danger in the world of flesh and blood.

i liked the narrator. the sex scenes didn't need to be so detailed. the story was too long and drawn out.

Loved this story a friend of Mavis goes missing and Eve promises her she'll try and find her. A couple of accountants are murdered and Eve has to try and solve this case as well as the missing person, and on top of all that Eve has to hold a baby shower for Mavis and the baby is born. Truly a full book

If you could sum up Born in Death in three words, what would they be?

Dallas and Rorke continue to evolve, and Mavis gives birth, while another killer is brought down. What more is there to say? :)

What does Susan Ericksen bring to the story that you wouldn???t experience if you just read the book?

I have listened to the entire series up to this point, and Susan is outstanding in almost all of them. There was one or two titles where she seemed to lose her rhythm, but she is back on track here. Her use of separate voices for each character makes it easy to picture the conversation going on, and help keep the story flowing without the constant

If you love the Dallas series, this one will make you happy. If you are not familiar with the series, you should probably start back at volume 1. Though each title mostly stands on its own, there is a definite progression of the characters and their relationships, and the story makes more sense with that background.

Classic Nora -- fantasy, mystery, love, and suspense, all wrapped up with a ridiculously happy ending. The narrator does a great job and it's just great, fun, escape.

I listen to the story in bed, at the end of the day, instead of watching the boring car shows (fixing the old & making the new, recreating for auctions...etc) and/or Pawn shop shows...you know, the guy's choice when they have the TV remote control. I set for the book to turn off at the end of the chapter just in case I fall asleep. But I end up laughing, cracking up, and now I am being watched by my spouse. Most times I share with my husband: How Roark and Eve act when Mavis has the baby....what Eve says as the head come out and the thought was just so hilarious! Just as funny as what Roark says when Even suggests that she (at the end of bed, where Mavis's the legs are spread) and Roark (at the head of the bed) switch places: His retort to that and to most everything to do with the Prego-Mavis were hilarious!

The story was creative (as most of them are in the Death Series), chilling, and well, a story w/o humor is not that impressive. But hey, listen to the Death series and make an opinion all your own.

What I don't like about the series is that in many/most or if not every one of the stories: Bad man 1 kills bad man 2 or when two other characters in the book hurt each other ... they have a mind to this own, nothing to do with Eve and Eve sits their and has a fit "I should've done this or that...." and takes the actions of someone else and complains, whines, kicks the desk because she is the one to blame: The only thing going on is Eve having her asinine fit. And she is like a spoiled brat: I don't wanna go to sleep now..... I don't wanna eat now..... then Roark has to literally treat her like a child, scold her, make/trick her take her medicine. I like Eve, but I wish she hadn't turned into such a spoiled brat (at times).

I like this book a lot because Mavis plays a bigger role in this one. It's an interesting story. Worth the time and the credit.

Another great story. Eve and Mavis's relationship is awesome. I laughed and cried. Bella-Eve!!

I love this book series!! The characters feel like real people, in my opinion. I like this book in general because it brings out Eve’s softer side and makes me feel that there’s a possibility of Eve and Rourke having at least one child at some point. I would love to see how Ms Roberts would write Eve as a pregnant woman and how pregnancy would affect the way Eve does her job. Let’s face, Eve is a hard ass and i love that about her, but I’m curious as to how hard assed she’s be when carrying a child. Considering she and Rourke both feel more comfortable disarming a bomb than holding a baby, that’s a dynamic I’d love to read. But the whole series gets 4 stars from me, so far. I haven’t read them all but I have read a lot of them. Love, love, love this series, keep them coming please.

When a young couple who hold different positions in the same company are killed. she is killed in her apartment, first, and her fiancé is murdered in his home. But when Mavis friend Tandy misses her baby shower, a teary and hormonal Mavis begs Eve to find her pregnant friend who due any day disappears, Little did they know that the two are connected to a baby selling ring. I love how Roark and Eve act when Mavis has the baby!! I thought what Eve says as the head come out was just so hilarious! I hope that Mavis' baby will bring Eve and Roarke around to having a baby of their own.

Susan Erickson is amazing as usual with all the characters. I enjoy listening to these books.

Excellent! This was the first “in death” book I listened to, & it was the one that hooked me!

I love how Eve would rather walk into bloody crime scene than watch a child birth. Just totally describes her character and makes me laugh. This was the book that hooked me on the “ in death” series!!!