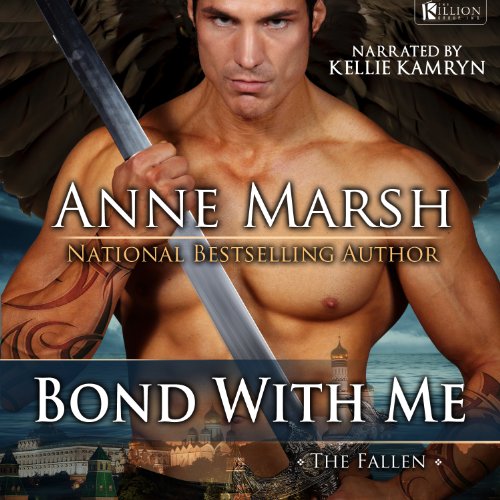 Fallen angels rule Moscow's seedy underworld, promising untold pleasure to the females who dare to mate them. That promise - and Brends Duranov's own raw sexual power-has hopefuls mobbing the velvet rope outside his elite club G2's.

But Mischka Baran has no intention of hooking up with one of the Fallen. Not even after Brends gives her an unforgettable taste of the sin and seduction he can deliver with those wicked lips. She's after information, not a stint as some fallen angel's toy of the month. What she doesn't know is that with a sadistic killer carving up his brethren, Brends is playing for keeps, hunting the one woman whose bloodline can end the mayhem, whose bond can restore his lost wings.

What listeners say about Bond with Me

I don't even know. I got about 30 minutes in and turned it off. The narrator is AWFUL.

This is a perfect example of how a book can be completely ruined by the narrator. This woman needs to NEVER be allowed to narrate again. She stumbles over her words and sounds like she smokes 2 packs a day. Seriously, the worst I've ever heard, and I work 40 hours a week and listen to books all day long at work. That's a lot of books.

The reviews were mixed but I tried it. Listening to the narration was excruciating. The voice of the narrator was infantile. The delivery was uneven with inappropriate pauses. I couldn't get through the first chapter

Absolutely the wrong choice for reading this book. Mispronounced words and strange pauses. You're better off reading the book.

the narration of this book was very monotone. if the narrator didn't tell you which character was speaking I would get lost trying to figure out who was speaking to whom. after listening to the book I am still unsure of the details of the book that I will not be purchasing the next in the series.

Yes. The story is nice.

What other book might you compare Bond with Me to and why?

Any other cheesy paranormal romance.

The Narrator did a terrible job. I could not get into the story with her narrating it. She is monotone with no emotion. Sounded like a middle school kid reading out loud in class.

Just read the book. Don't get the audio.

Would you recommend Bond with Me to your friends? Why or why not?

No, I couldn't stand narrator, she sounded like my kid sister. Popping and craclking in the background made the recording sound like a high school production.

Lack of emotion... The recording sounded like my kid sister reading me a bedtime story.

Disappointment could of been a good story and start to new series.

Couldn't even finish it :(

I would try another book from Anne but not from Kellie

What could Anne Marsh have done to make this a more enjoyable book for you?

get a different reader. I had to stop it after an hour and half.

The way she read. I don't know if she was bored with the book. or that she didn't know how to read it. maybe she should practice reading books out allowed first before she does another book. or at least read the book a few pages ahead and then read it to me.

I wasn't impressed that I paid a lot of money for a book I couldn't even sit through. The story line sounded really good. I just couldn't handle the way the reader was reading it to me.

I don't want to put anyone off this book. the way I want my books read to me is the same way I read them to me. Read them like your there experiencing the plot. if your joking you might want to chuckle. not tell me that your chuckling. I think listening to someones reading is personal preference so listen to it quickly first then decided before buying it.

I'll start with the good points. The story itself is pretty good. The premise behind the fallen angels and heavenly politics is quite creative. Some parts are purposefully (at least, I'm pretty sure it's purposefully) vague to inspire you to keep reading the series. The fallen angels are "learning as they go along", so it only makes sense that the readers are learning about the greater picture at the same pace that the Fallen are.

The writing isn't bad, although there are places that could use some work, particularly with the dialogue. There were also a few problems here with the author staying true to her world building and setting. The book is set in Russia in 2090 or thereabouts, but there are several references that are strictly present day American colloquialisms.

There is plenty of sex and swearing, but each sex scene is, in general, mercifully brief. There's a lot of talk about fulfilling fantasies, and a few (3 I believe) scenes with voyeurism, but most of the actual sex is pretty vanilla. In all honesty though, when it comes to sex scenes, it's hard for me to separate the writing from the narration, because when reading sex, the narrator really needs to do it well or the whole scene comes off sounding ridiculous.

Which brings me to the narration. I'm afraid you would have a hard time convincing me that this is a professional recording. It sounds as though there was no attempts at all to edit this recording, not even "self editing" by the reader. We hear all of her numerous pauses (almost like a reader who loses her place and has to find it again), sometimes mid-sentence. We hear her swallow, things shuffling in the background. There are a few jerks and pauses in the recording itself, as if someone shut off the recording device and then turned it back on later, but I can only think this was the narrator taking a break rather than any attempt at editing. All in all, the recording sounds like something done in the narrator's spare time, sitting at home with her computer microphone and a manuscript. There was also little attempt to change tone of voice to represent different characters, and what there was of that was not consistent. If she made an attempt to narrate the mood (ie. using an excited voice for an action scene) I didn't notice. While the readers voice was pleasant enough, her actual reading was pretty amateur. I honestly don't like to be cruel, but it's pretty obvious to me that narration isn't Kellie Kamryn's calling. Perhaps though with some voice coaching to teach her how to do a wider range of voices and accents, as well as a decent editor, but as it stands, I will avoid books she reads in the future.

Personally, if I had to do it over again, I would have bought the written version.

Ok.. The story was just awesome... But.... Narration can literally kill a good, a really good story. However, that being said, the narrator was not bad at all, it was just a horrible recording session, I think... This was an awesome beginning to a paranormal romance... (my faves by the way) where these fallen angels have to find there mates to get back into heaven. The Fallen Angels are goblins and they have the power of granting bonds with humans. The twist is, Arch Angel Micheal is not so nice, all the Fallen have never found a mate, and the smex was simply great!!!

The recording was just horrid though... I even think some of the chapters were missing a few paragraphs. The Narrator was not bad at all, but it did not sound like a professional narration. You could hear the narrator breathing, pausing, licking her lips and all kinds of stuff.. I even think I hear someone ruffles some paper once or twice. So really bad recording session. I somehow finished it though and glad I did... was a great book. I am looking forward to the next one...I just hope they clean up the recording session a bit.

Don't buy...wait for a credit.

The story line is pretty good but I miss entire pages or even chapters with this audio. You will listen to it and then all the sudden it has some issue and skips to a different part. Frustrating.