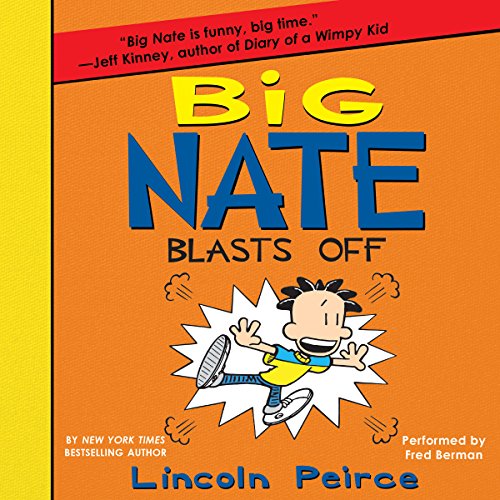 By: Lincoln Peirce
Narrated by: Fred Berman
Try for £0.00

For fans of the hilarious Diary of a Wimpy Kid series, here comes the eighth novel in the New York Times best-selling series Big Nate.

Nate has a crush on Ruby. But after his scrap with Randy Betancourt makes headlines in the Weekly Bugle, he's got a problem way worse than detention! Can Nate bounce back? And will the annual Mud Bowl be a blast...or a bust?

What listeners say about Big Nate Blasts Off

Loved the book and would recommend it to anyone

My BrAiN iS dEtErIoRaTiNg

ThErE Is A MeMe In My RoOm EvEr SiNcE I ReAd ThIs.I rEcOmMeNd ThIs To ALL

This is your best book (all your books are awesome) and I have been reading your books for a year big Nate is awesome I love the story and the humor.

Big Nate is a Big Win

Its a wonderful book. easy to follow and loveable characters. Nate is just your average preteen and he pushes the envelope

Good but not my favorite

This book is good but this is t my favorite out of he serious I encourage the author/creator to make more books and I hope that audible will add more of his books.

Awesome book. I love it.


Hilarious and hard to not laugh at bed time. I love the comics. I highly recommend this book

Always have a thumbs up

Thumbs up . I love it. It is awesome. I thought it was funny when Nate slammed into Randy.😆😆😁😀😣

He is so😎😂😆😝😜😋😁and I 💚 it.
It is the best book ever. Make sure that Lincoln Pierce sees this review!

great and a awesome and amazing and cool toooo