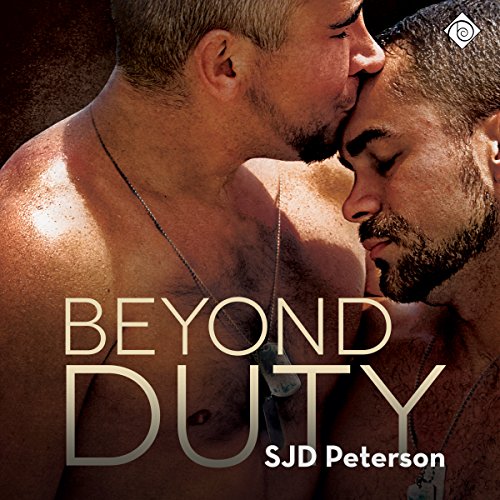 By: SJD Peterson
Narrated by: Jonathan Young
Try for £0.00

The repeal of "Don't Ask, Don't Tell" didn't come soon enough for Gunther "Gunny" Duchene and Macalister "Mac" Jones, career US Marines who met at boot camp in the 1990s. They've been somewhere between best friends and lovers in peacetime and wartime both, but as the clock ticks toward Mac's and Gunny's retirements, the guys have much more to worry about than coming out.

Whether their relationship will survive outside of the closet they've had to shove it into for over two decades is a big question mark. Gunny questions why a hot military man like Mac - who could get any guy he wanted, including a younger, sexier one - would want him. But as Gunny and Mac navigate emotional waters as choppy as any they saw on duty, they just might learn Semper Fi applies to more than their careers.

Right in the feels

Two months prior to his retirement after twenty-two years in the U.S. Marine Corps, Gunny Duchene is floored to see that Obama is about to sign a repeal of "Don't Ask, Don't Tell". Twenty-two years too late for Gunny to be able to be out and proud with the love of his life, fellow Marine, Macalister Jones.

Mac's retiring in two months as well, in fact they're celebrating their retirement ceremony together, and Mac has big plans that have grown bigger with the realization that they will be able to be honest about being together for the first time as they say good-bye to active duty in their beloved Corps.

The story chronicles the emotions both men face about their impending retirement, facing their families about their relationship, and finally facing the Corps that made them the men they are today as a couple. Jonathan Young gives a solid performance with the narration of both the emotional times and the sexy times.

Told especially well from both Gunny and Mac's POV I enjoyed this thoroughly.

This is definitely a solid story featuring an established couple, a lot of very hot sex, quite a bit of quiet romance, and a surprising amount of feels.

If you could sum up Beyond Duty: Beyond Duty, Book 1 in three words, what would they be?

What other book might you compare Beyond Duty: Beyond Duty, Book 1 to and why?

Don't Judge by AE Via. The characters are very similar, two strong alpha male types coming together and finding their own way to co-exist.

Yes I did! Will definitely be looking for more from him.

The conversation Mac has at the breakfast table with his mother, I was weeping!

Gunther Duchene and Macalister Jones have been best friends and friends with benefits for the last twenty something years. With retirement approaching, both men are both elated and depressed with their pending exit from the military. Having not shared the intensity of their feelings for each other, the mutual interest in taking that relationship to the next level, they are both suffering thinking retirement also means losing the benefits part of their friendship.

Within an hour of the book starting Gunny and Mac have a heart to heart and talk to each other, share their feelings and agree to take that next step. (I have to say I was very pleased that there wasn’t that awkward not opening up, angsty, dragging out the way they really feel aspect to this part of the story.) But retirement is a few months away, and DADT has not quite yet been repealed on paper, so the two men have to continue to keep their relationship under wraps for a little while longer. The strain doesn't come from the DADT aspect so much as the fact they've actually been living their lives in secrecy with their family and friends as well. They both fear how their parents especially will react to learning not only are their respective sons gay, but they are lovers as well instead of merely best friends.

I’ve read Peterson’s work before and I’m always intrigued with her ability to write such strong characters and believable storylines, this was my first audio with Young though. I have to say I was very impressed with his voice, the way he brought Gunny and Mac to life was amazing. There is a couple times where Gunny is really put through the ringer emotionally and Young captured the pain and confusion he was feeling in the tone he chose to use at that time. He really immersed himself into the story completely as well, right down to every moan, groan and sexy little detail. Strong nuances and inflections, I’ll definitely be listening to his work again.

If you are a fan of strong, confident alpha males, military men and love stories with a harder edge then you’ll enjoy this story for sure.

Such an endearing love story. These two men were best friends and lovers during the time of "Don't ask, Don't tell. It's time to retire and finally the law has been repealed. We walk with them through their last days prior to their retirement ceremony. It was heartwarming and beautiful. I can not believe I skipped over this book many many times while browsing my wish list.

I loved these two men, especially because they are both sexy alpha males. The sex is hot and my heart melted by Gunny and Mac's love for each other. They are honest in their love for each other. I did not experience the usual drama and misunderstandings most of the romances have. Their love was the constant from which the story of their lives were told.the narrator.

Narrator: I was impressed by the narrator. He did a great job. I listened comfortably with no problems. His voices for the characters were distinguishable.

I do recommend this audiobook if you are in the mood for a steadfast, undying love story between two retired US Marines.

A decent read, not a stand-out for me.

When I saw this book for review in the audio edition, I HAD to try it. I feel like "Beyond Duty" is somewhat of a must read if you like M/M military books. I mean, two career Marines getting together? All that manliness and testosterone?! YUM! And some mild kink never hurt anyone, nuh uh.

Let's get right to it. I'm historically not a fan of established couples, and this book is basically an established couple story. Gunny and Mac have been exclusive for years, and though their relationship title was never established, they were essentially 100% a couple for a very long time. One of the problems that I had with this story was that I found Gunny and Mac's relationship to be a bit... boring. Without the excitement of a new relationship, I struggled a bit to get into the two guys as a couple. However, at the same time, I found their devotion and understanding of one another to be very touching.

Kink-wise, I was pretty "meh". I always like a good power play, but I was a little take it or leave it here. I think it made some of the sex scenes super hot, but there are a LOT of sex scenes in this book, and they began to feel a little rote for me after a time.

The story was an interesting one, and I liked learning about Gunny and Mac's families and their personal issues, as well as the "coming out in the military" plot. Though I found the story to be a little ambitious in terms of the amount of things that it covered, as well as a little slow, I liked it overall and found it to be mostly entertaining.

Now for my review of the audio. The narrator,Jonathan Young, did a decent job of the audio, even though I didn't love his voices for the MCs. They were a little over-exaggerated and growly for my tastes, and not in a particularly sexy way. However, I found him to be easy listening, and I would listen to another book by this narrator again.

I think that if you like established couple stories, military stories, and some light kink, you should certainly check this one out. Though it wasn't a stand-out for me, I can see why it is a favorite of many readers.

*Copy provided by the publisher in exchange for an honest review*

Such a sweet story with amazing narration!

The first part of this story is Gunny facing retirement and the possible loss of his “fuck buddy”, another military man forced into hiding by “Don’t Ask Don’t Tell”. Gunny is afraid that given the opportunity to be out, Mac will find another, younger, better lover – he’s afraid that’s he’s been nothing but convenient all these years.
Fortunately, this concern is rapidly dispelled by Mac, who is not only psyched about the end of DADT, psyched about retirement, but wants to marry Gunny and walk hand in hand with him at their retirement ceremony to show all other closeted gay military men that true, tough, and honored marines can be gay too.
Gunny is excited to be married to the man he’s been in love with for years and together he and Mac wrestle with their new lot in life. Retirement. Coming out to their friends, family and their community. Neither man can predict which of those will be the toughest, but they are at least doing it together.

The narrator, Jonathan Young, does a fantastic job with Mac’s southern drawl and his “mama” is hysterical and wonderful as well. I really thought the audio is the way to go to appreciate this story, Jonathan adds so much to the reading – giving nice emotional impact to the story.

Wish you could write the beginning of there relationship. Would love to read it. The bond they share is remarkable.

What made the experience of listening to Beyond Duty: Beyond Duty, Book 1 the most enjoyable?

The life that was brought to each individual character by the distinct voices and inflections.

What was one of the most memorable moments of Beyond Duty: Beyond Duty, Book 1?

Have you listened to any of Jonathan Young’s other performances before? How does this one compare?

I have no listened to Jonathan Young before, but he was amazing. I really enjoyed the way he narrated the book.