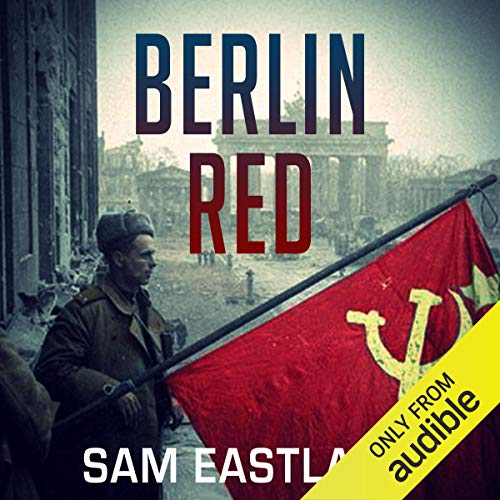 By: Sam Eastland
Narrated by: Steven Pacey
Try for £0.00

April 1945. East of Berlin the Red Army stands poised to unleash its final assault upon the ruined capital of Hitler's Thousand-Year Reich. To the north, at a lonely outpost near the Baltic Sea, German scientists perfect a guidance system for the mighty V2 rocket, which has already caused massive damage to the cities of London and Antwerp.

This device, known only by the codename Diamondstream, will allow the rocket to arrive at its target with pinpoint accuracy. So devastating is the potential of this newly mastered technology that Hitler's promise to the German people of a 'miracle weapon' that will turn the tide of the war might actually come true. When a radio message sent to Hitler's headquarters heralding the success of Diamondstream is intercepted by an English listening station, British intelligence orders one of its last agents operating in Berlin to acquire the plans for the device.

Desperate to evacuate their agent from the doomed city before the Red Army swarms through its streets, British special operations turns to the Kremlin for help. They ask for one man in particular - Inspector Pekkala. Anxious to acquire the plans for himself, Stalin readily agrees to risk his finest investigator on what appears to be a suicide mission. But when Pekkala learns the reason that the British have singled him out, he knows that he must make the journey, no matter what the outcome might be.

The agent he must rescue is the woman he had planned to marry before the Revolution tore them apart, sending her to Paris as a refugee and Pekkala to a gulag in Siberia. This time, for Pekkala, it is personal.

What listeners say about Berlin Red

Shame to end the series

I’ve enjoyed everyone of this series but with this book seemingly the end, I look forward r to seeing what the author does next. It’s a pity when a good series ends but better than drifting off into lower quality books for the sake of it.

I felt the story was too stuttery. Jumping between plot and past historical content, not all of which seemed necessary.
The narrators characterisation was good.
The lead character seemed peripheral at times and his investigative skills were not always that skilfully employed.
Ok, but not outstanding.

Best of the series, thus far