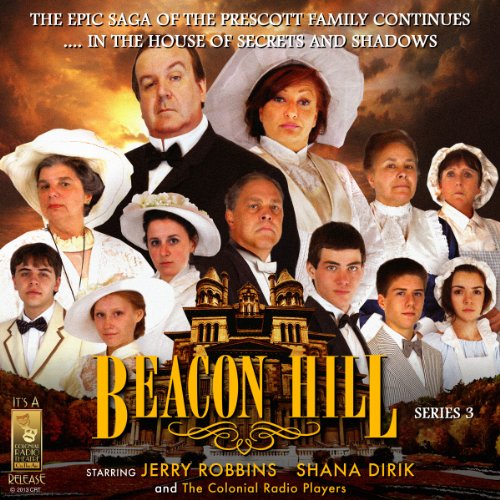 A house filled with shadows and secrets. The epic drama of the Prescott Family continues.

Series three finds Marietta Prescott living in Philadelphia as Burt Colton continues to appear on stage, but is putting off the wedding. With no money and an aggressive landlord, things begin to look very bad for her as she finds herself doubting Burt's sincerity. Back in Boston, Gilbert Hull begins a campaign to have the "Wayward Home" moved from Beacon Hill, causing Jocelyn and Augusta Prescott to join forces and draw the battle line. Meanwhile, Kevin Hull is leaving Boston and proposes to Aurora, while Barton confides something to Robert that could shake Prescott House to its very foundation if it were ever known, and Lucille is being driven to insanity with the news given to her by Williams. Meanwhile, Charles plans to use his financial power to crush Gilbert Hull once and for all.

What listeners say about Beacon Hill

A Wild Deviation From The CRP's Norm

Having been a fan of practically every CRP production, I looked forward to the Beacon Hill series with joyful anticipation. Season 1 was terrific and kept me spellbound and longing for more. But at the end of season 2 began the change for the worse. My family and I have so enjoyed the CRP productions for many, many reasons, but what has set them apart from everyone else in today's entertainment industry is the fact that they've not succumbed to eroding resistance to accepting perversity as normal, through desensitization by way of constant exposure. This can no longer be said about CRP, sad to say. I so hope that this production has been a "one off" and that we won't experience any more of it in future productions. I won't buy another if they do.

I can't believe it has so much cursing, drinking, and homosexuals in it. no good!!! I don't want to give it any stars

Should Have Stopped at Series 1

What disappointed you about Beacon Hill?

The story line creates constant frustration. The listener isn't given any time to recuperate from one character's self imposed disaster before being hurled into the next.

Would you ever listen to anything by Jerry Robbins again?

Yes, I enjoy the Colonial Playhouse Radio productions, but I will definitely pay more attention to ratings.

Yes, I very much enjoyed Jeeves and Wooster, the Burglars Club and the Father Brown Mysteries.

What character would you cut from Beacon Hill?

The characters were well developed, but were often placed in situations or faced decisions and responded in ways that were incongruous to the time period of the story line.

Not a professional reviewer!

Would you listen to Beacon Hill again? Why?

This series just keeps getting better and better! Who knew Boston high society at the end of the 19th century was so intriguing? Solid characters without being simplistic caricatures carry the story forward with both believable drama and plot twists. Looking forward to the next installment!