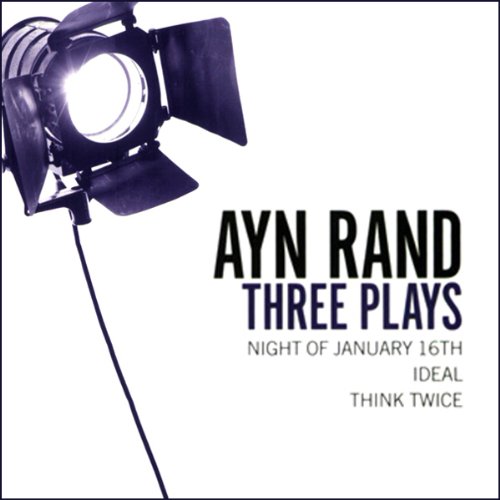 Published together for the first time are three of Ayn Rand's compelling stage plays. The courtroom drama Night of January 16th, a 1935 Broadway success famous for leaving the verdict to the audience, is presented here in its definitive, final revised text - a superb dramatization of Rand's vision of human strengths and weaknesses.

Also included are two of Rand's unproduced plays: Think Twice, a clever philosophical murder mystery, and Ideal, a bitter indictment of people's willingness to betray their highest values, as symbolized by a Hollywood goddess suspected of a crime and fleeing the authorities.

Loved it! Truly compelling, imaginative and intelligent storytelling. A feast for the senses and the imagination!Ayn Rand shines

Loved it! Truly compelling, imaginative and intelligent storytelling. A feast for the senses and the imagination!Ayn Rand shines

Would you listen to Three Plays again? Why?

I would listen to it again as it is the type of book you can listen to again and pick up something different.

What was one of the most memorable moments of Three Plays?

Have you listened to any of Robin Field???s other performances before? How does this one compare?

After reading her more famous works, I started searching for additional writings as many fans of Ayn Rand often do. Finding these plays was like uncovering a treasure. Though they can be difficult to listen to, the narration is very good and the content is excellent.