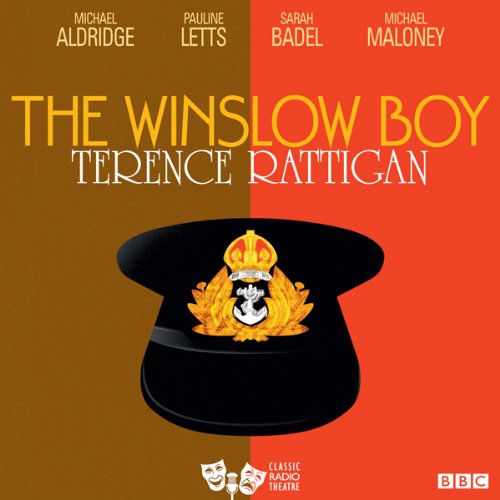 A BBC Radio 4 production of Terence Rattigan’s famous play about an innocent boy unjustly accused ‘It is easy to do justice - very hard to do right.’ When he is accused of stealing a five-shilling postal order, fourteen-year-old Ronnie Winslow is expelled from naval college. But his father believes his claim of innocence and, determined to clear his name, engages the most famous barrister in England to fight his case. It is up to Sir Robert Morton to take on the Establishment in order to ‘let right be done’...Adapted as a famous British film starring Robert Donat, 'The Winslow Boy' is a moving story about fairness and fighting for a principle. This gripping BBC Radio adaptation from 1981 features a distinguished cast including Michael Aldridge, Pauline Letts, Sarah Badel and Michael Maloney.

What listeners say about The Winslow Boy (Classic Radio Theatre)

I was hoping to read the play as I listened but this is not the original Rattigan version.

An excellent full cast production.
One to enjoy now again. Well acted. The cast bring this old play to life as the poor young boy is proven innocent or guilty & we wait to see will justice be done.