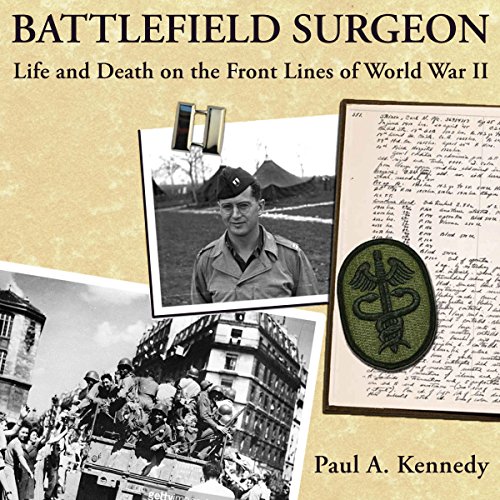 Battlefield Surgeon: Life and Death on the Front Lines of World War II

By: Paul A. Kennedy
Narrated by: Ellery Truesdell

In November 1942, Paul Andrew Kennedy (1912-1993) boarded the St. Elena in New York Harbor and sailed for Casablanca as part of Operation Torch, the massive Allied invasion of North Africa. As a member of the US Army's 2nd Auxiliary Surgical Group, he spent the next 34 months working in North Africa, Italy, France, and Germany, in close proximity to the front lines and often under air or artillery bombardment. He was uncomfortable, struck by the sorrows of war, and homesick for his wife, for whom he kept detailed diaries to ease his unrelenting loneliness.

In Battlefield Surgeon, Kennedy's son Christopher has edited his father's journals and provided historical context to produce an invaluable personal chronicle. What emerges is a vivid record of the experiences of a medical officer in the European theater of operations in World War II. Despite the enormous success of the popular M*A*S*H franchise, there are still surprisingly few authentic accounts of military doctors and medical practice during wartime. This remarkable firsthand account offers an essential perspective on the Second World War.

"An intimate and dramatic view into the experiences, thoughts, and emotions of an Army surgeon." (John T. Greenwood, Former Chief Historian, Office of The Surgeon General)

What listeners say about Battlefield Surgeon: Life and Death on the Front Lines of World War II

This is an interesting memoir that covers some of the key campaigns of WWII from North Africa to D Day. It is a bit different from some of the memoirs I have read recently in that it deals with the medical side of the War. I feel it is important for the veterans and their families to write memoirs or release diaries from all the wars this country has fought.
Christopher Kennedy edited his father’s, Paul Andrew Kennedy (1912-1993), diaries from World War II. In June 2016 this book was published by the University of Kentucky Press. The diary was a daily journal that covered what he saw, did and felt from 1942 to 1945. Kennedy also took many photographs which are in the book along with hand drawings of diagrams of wounds. For those reading this in audiobook format they provided a website to view the pictures at battlefieldsurgeon.

Kennedy was part of the 2nd Ancillary Surgical Group of the United States Seventh Army and then the U.S. Third Army. He was part of Operation Torch in North Africa, the campaigns in Southern Italy and Monte Cassino. He was also at Anzio and then into Rome. He then was part of Operation Dragoon in the Rhone Valley and he ended the war in Germany. Kennedy tells of treating the wounded from the 442nd Infantry Regiment which consisted of the American Born Japanese. The 442nd was the most decorated regiment of WWII. In 1945 Kennedy was part of the medical team that went into the liberated Dachau concentration camp.

Kennedy’s diary covered the daily life in the Army, the problems with the weather, descriptions of the countryside and people as well as the medical cases he saw and procedures performed. There is a forward by the Pulitzer Prize winning historian, Rick Atkinson, and an afterword by the U.S. Army medical historian, John T. Greenwood.
Ellery Truesdell did a good job narrating the book. He has a deep conversational voice that worked great with this material. Truesdell is a voice over actor who has done film, cartoons and videogame as well as narrating audiobooks.