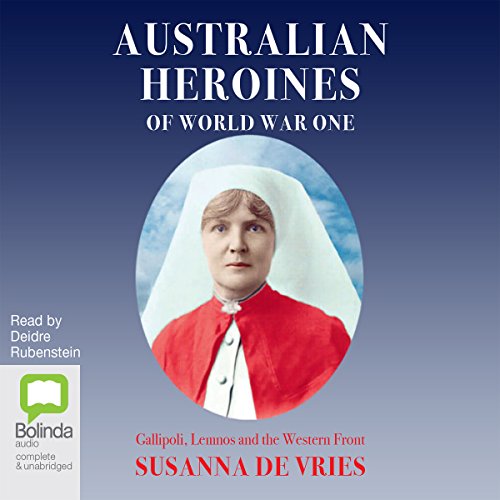 Australian Heroines of World War One

By: Susanna de Vries
Narrated by: Deidre Rubenstein
Try for £0.00

The story of eight courageous women who had the courage and strength for which the Anzacs are renowned and the compassion and tenderness that only a woman can bring.

One brave nursing sister, Hilda Samsing, became a whistle blower. Nursing aboard the hospital ship Gascon, outraged by the bungled evacuation of wounded Anzacs which was censored out of the press, she let her diary be shown in high places, which raised questions in the House of Commons.

In Belgium, Louise Creed, a Sydney journalist caught in the besieged city of Antwerp, made a hair-raising escape from a German firing squad and lived to tell the tale. Brisbane's Grace Wilson, ordered to establish an emergency hospital on drought-ridden Lemnos Island, arrived there to find suffering Anzacs but no drinking water, tents or medical supplies. Grace and her nurses tore up their petticoats to use as bandages, survived for weeks on bully beef and biscuits and saved the lives of thousands wounded at Lone Pine and the Nek. In November 1915, after a blizzard hit the trenches of Gallipoli, they cared for Anzacs with frostbitten or gangrenous feet.

After surviving hardship on Lemnos, young Florence James-Wallace worked in France, near the front line in a casualty clearing, treating soldiers with hideous wounds or blinded by mustard gas. The Germans emerged from their trenches and advanced as Florence and her stretcher cases escaped by lorry. In 1918, after years spent nursing men smashed and pulverised by machine gun fire, she faced yet another challenge - an epidemic of Spanish flu.

They returned to a world that recognised only male courage and were quickly forgotten, two of them awarded such meagre pensions they died destitute and forgotten.

What listeners say about Australian Heroines of World War One