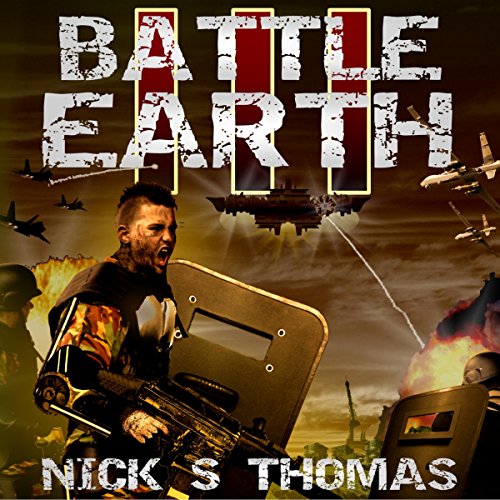 The third installment of an epic new science fiction trilogy that tells of humanity's desperate struggle to survive against an overwhelming alien invasion. Reinforcements from across the world have brought the battle in Germany to a bitter standstill. Faced by increased pressure from the humans, the Krycenaean invaders call in troops from the Moon to mount a new offensive. On Earth, Major Taylor learns that Captain Friday may still be alive, but held a prisoner. He hatches a bold plan to rescue him, but Taylor directly contravenes his orders and is arrested. Imprisoned and facing court martial, Mitch Taylor is helpless as the war rages outside his prison walls. With the Earth forces overrun and in full retreat, Mitch has no option but to escape and confront Karadag once more before the planet is lost. Still carrying the mental scars from his first encounter with the brutal enemy leader, he must succeed for the fate of the human race. Battle Earth is a futuristic sci-fi action adventure series that chronicles vast bloody battles following humanity's first reach into the stars.

well written and narrated as allways does not fail to entertain. looking forward to the next adventures

A great conclusion to a great series, if you have not already done so read/listen to the first two books in the series to help you to really enjoy this one although I am sure that it would still be enjoyable if not.

The writing and narration continue at their high standard making it a very easy listen.

The story is ripe for a follow up and I cannot wait for it!!!

As with my previous experience Thomas creates a great camaraderie and experience with his writing,but there is always a niggle i find.
In this case it's the amount of time we spend on incarceration after disobeying orders and making a valiant rescue. It gets quite political with the upper brass and so this may also spoil this otherwise good story for others as well.
Narration was top notch so cant fault the voices although a few more spf would have helped.
I requested this audio and have decided to leave my thoughts on this for everyone.

i reviewed the wrong book. i did not get to the numbers 2 and 3 yet.

great alien invader book. never slowed at all . will finish the series

i got a free copy of this book.

I didn't like this one as much as I did the other two, there were a few inconsistencies.
Like books one and two this has plenty of action.
If you can ignore certain contradictions then it is a good read.

They give their all, over and over!

The destruction of the enemy weapon in western France has been a great morale booster. Majors Taylor and Shondra have been gaining a reputation as The Immortals. The war has raged for two months, and what is left of the battalion is dug in at Ramstein Air Base in southwestern Germany. The Rytek Exoskeleton Suit has proven to be a godsend. The armor and anti-material weapon has leveled the playing field to some degree. Intelligence has reported that soldiers are being held behind enemy lines. For what purpose is unknown but the desire to rescue them is undeniable. Command Officers will not approve the rescue mission. Will Major Taylor once again disobey orders to save his comrades? Ramstein is about to be overrun. Soldiers are commanded to fall back to prepared positions in depth. Professor Ryder comes through again to provide his latest equipment to his favorite testing soldiers. Once again with decent equipment, Majors Shondra and Taylor may have a chance at stopping the enemy assault. Lastly, if Majors Taylor and Shondra have not done enough already, the Command Brass comes up with one more idea that may be a game-changer. This volume contains plenty of action and excitement. I was given this free review copy audiobook at my request and have voluntarily left this review.

With lots and lots of action and a fast moving story line , I found this to be the best installment of Battle Earth so far. I look forward to the next episode to see how the story progresses.

Where does Battle Earth III rank among all the audiobooks you’ve listened to so far?

It's a pretty easy listen. Plot is not very complicated, and it flows well.

Lots of emotion and a solid cast of characters.

Which character – as performed by Neal Arango – was your favorite?

Really liked General Schultz. Neal does a great job of delivering the dialogue for all the characters and gives them each a unique personality.

I wouldn't say it incited any extreme reactions, but I did enjoy this book the best out of the series so far.