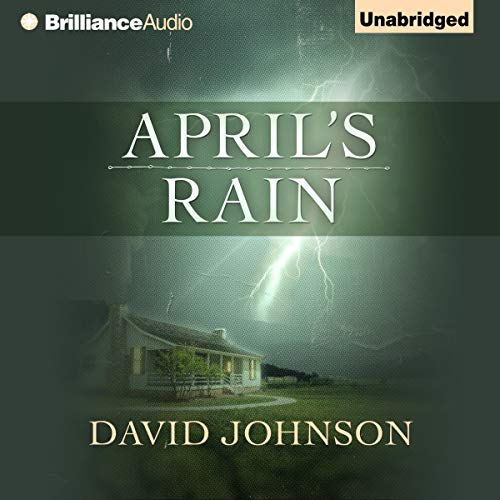 Eight years after losing her closest friend, Tucker struggles to keep her rebellious, self-destructive granddaughter under control. When April accidentally kills her boyfriend while defending herself from his attack, Judge Jack helps Tucker ferry her granddaughter away to Spirit Lake, a remote treatment facility in the mountains of eastern Tennessee. There, April creates a false identity, painting herself as a young socialite, and blocks Tucker's attempts at communication.

Tucker's grandson March, missing for eight years, is discovered half-dead, having lost both his sight and his memories. As he recovers, March's blindness persists but fragments of his life reemerge. When he finds himself at Spirit Lake, he runs headlong into his past.

Will Tucker be able to reunite her family after their paths have splintered?

What listeners say about April's Rain

These comments address the The Tucker Series, as of this writing four novels written by David Johnson. All of the unabridged audiobooks are narrated by Laural Merlington. Lengths vary from just under six hours to just over ten. I was introduced to the first book via an Audible Daily Deal and enjoyed the story enough to finish the entire series.

The stories center around the lead character, Tucker. Tucker is an elderly woman, a victim of child abuse, who has been saddled with the raising of her three grandchildren. The setting is a life of extreme poverty in rural Tennessee.

My initial reaction is positive with a few codicils. Working through all four novels became a bit tedious, many areas a bit too preachy for my taste .. especially in books three and four. The characters were also very teary, lots of crying and angst. For those squeamish of the topic, some terrible child abuse is vividly described. There are many instances that had me rolling my eyes … some situations and character behavior lacks credibility.

Reason I liked these stories? Character development and narration. David Johnson does a terrific job with the character of Tucker. I’m sure you’ll find other characters in the stories that are well developed and believable. Narration by Merlington is excellent … unique voices for all characters.

If you are interested in a familial tale, with character development exceptional, you will enjoy The Tucker Series.

If you’re turned off by books that are very preachy and loaded with christian values, these are not for you.

Novels simply do not get better than David Johnson's 5 book Tucker series. April's Rain, her tears, is Book 3. I had to stop for lighter fare after Book 2 due to the intensity. Now I'm ready for March On which is book 4. Laural Merlington narrates the audiobook and she does a great job.

Book 5, Who Will Hear Me When I Cry, is not available (yet?) in audiobook format, so I guess I'll have to read it in Kindle ebook format. Audible, how about Book 5?

My genres of choice are all in the mystery/thriller category, but I am very happy I found this contemporary fiction series.

I recommend this series with one reservation: avowed atheists may not like the religious aspect which is present but not overwhelming. It is certainly far less intensely religious then novels by Catherine Coulter or Joel C Rosenberg.

The third book in the Tucker series. I have enjoyed the entire series so far. Listening to the voices as the narrator reads the books has done a wonderful job of bringing each person to life.

love all the series I enjoyed the. all I just want more of the

I have truly enjoyed and fell in love with the Tucker family. There story is a story of hope for everyone. Struggles eventually pass but hope last forever.

At first I wasn't sure I was going to enjoy this installment because the format was different but after I got thru the first 30 mins I understood why it had to be that way.

Love the Series but the end dragged on got to the point where I wasn't listening as intently. Still must listen to get the grasp of the series though. I caught up at the end.

I'm really enjoying the Tucker Series. Simple yet relevant. there are is dragged out drama or crazy suspense. Just people being people. it's well written and I really enjoy the narration.

It was a lot more predictable than the first and there was noticable duplication of phrases. Even though this book didn't flow as smoothly as the first one, it was still enjoyable.

David Johnson is a wonderful writer who manages to make me feel every emotion in his storytelling. He inserts humor even when there is pain. He is mindful of the intricacies in relationships and always manages to make me contemplate how I would react or behave if in the same situation. He helps me recognize my need for the Lord without going overboard in his stories.

This was long. The suspense kept me interested in finding out what kept this family apart.