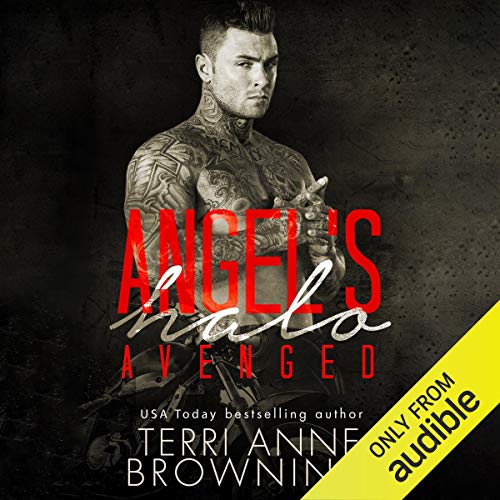 Backing the Angel’s Halo MC into a corner will only cause an explosion.

Surrounded by their enemies, with danger lurking right outside their door, the MC is on total lock down. Between the Italians and the senator, they are looking over their shoulders every minute of the day. But was there an enemy sleeping right under their roof?

Kelli: I’ve always done what I had to survive, but it wasn’t just me I had to fend for. With my mother’s illness taking over her mind and making me a stranger to her, I would do anything to make sure she gets the care she needs.

But when it came down to it, I couldn’t betray Colt.

I sold out my bastard of a father - trading his secrets for enough money that would ensure my mother would always have what she needs - to protect the man I swore to myself I wouldn’t fall for. But too late, I realized he was everything I really needed.

Colt: With her fierce passion, I fell for Kelli long before I was ready to admit it to myself.

Now that love was blurred by the betrayal that had blindsided me.

At least with the USB drive of all the secrets she spilled on her father, we now had the upper hand on at least one of our enemies.

But will it be enough to repair what was broken between us?

Or will she become another casualty of this war who would have to be avenged?

very sexy CVouple things that drive .me crazy the strong women whining. the sheep. and how tanner's legacy is kinda past on i kinda hope that hank was the real daddy.

This series is great it’s been an audible marathon week with all the books. There are missing conclusions and stories and I want to get the next book. Hope I’m not waiting too long.

Revisiting couples from the prior stories, some settled and learning to understand, live and trust each other
New obstacles and losses... new life
Great narration and now onto the last book of the series!

This story is about Colt and Kelli but also gives updates on some other characters. Colt and Kelli have both grown up in a way that prevents them from trusting many people. Colt only trusts his MC and Kelli doesn't trust anyone. This book explores how, in order to continue a relationship, they must learn to trust each other. It's very different from the other stories in the series, but so is their relationship.

I love this series!! I love the stories of all of the bikers and how each character grows through the series.

I absolutely loved this story. This was an intensely emotional, exhilarating, and thrilling journey to go on. I enjoyed all the different POV’s.
Excellent cast of narrators.

Can I give this ten stars?

Because that’s what it deserves. The drama! The angst! The violence! This is what every MC book should be. Completely morally bankrupt people making love and building lives and completely messing everything up. This was to damn good lol.

Again the Angel’s Halo MC series delivered another hit. So many twists and turns. I throughly enjoyed this book.

This book is more based on Colt and Kelli. Colt is a member of the Angels Halo MC and part owner of Hannigan bar. Kelli is a stripper and dating Colt. But she's really spying on the MC for her father. What Will happen with the MC finds out what she's doing? What Will colt do?

We meet Jos she's Butch's daughter and  Uncle Chaz granddaughter. She's home are the tragic events and is bringing a little secret with her.

We follow some of the other family members  and get a little updates in there lives. But with the tragedy that has struck the MC, it has left them looking for the ones who attacked them.

I love how the series continues as a whole and we really hear from all the characters and not just have glimpses. The multiperson narration is also amazing and brings the story to life in a great way.