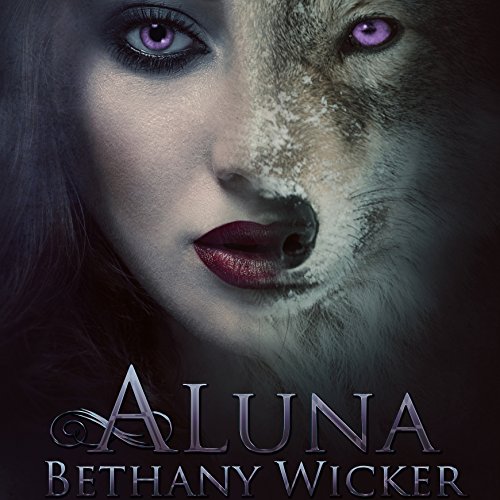 Desperate to find out what she is and where she belongs in the werewolf society, Lena seeks out Dash - the only other werewolf of her kind. But Dash is reluctant to give up any information.

Along with her newly founded comrade, Stark, Lena must uncover what Dash is hiding. But she learns that sometimes the truth only leads to more trouble.

Wanting to get back to her pack and Kane, her mate, Lena struggles to find how to break away from the mess she's gotten herself into. But when old enemies come back into the picture, things take a turn for the worst.

What listeners say about Aluna

Great Book 2 in the Series

I received Book Number 2 free for an honest review. I bought Book Number 1 in order to get the whole story. I'm glad that I did. It has some very important background that was needed. I loved the story line and the characters. The author did an excellent job of developing the story and the characters. It was difficult to take any breaks from listening to it. Audible doesn't sell book 3 so I'm going to have to find somewhere to get it. I love a strong female and Lena fits the bill. Kane is also very sexy and a great match for her. However, the story is mostly about Lena and her growth and power as an alpha. The narrator did a great job of distinguishing the indivual characters that Bethany Wicker so creatively developed. Looking for the next book in the Series. Love the last two.

Editing issues stalls this one.

Writing is a craft. Anyone who takes the time to write a thorough book review knows that to craft your ideas into a cohesive and logical end product requires time and editing. New authors are difficult to review because they haven't developed their craft, which includes the skill to critique their own work. And, if they don't have the benefit of friends or family who aren't squeamish about giving an honest critique, they will never know where the problems lie.

Writing is a tricky and painful process, and I have great respect for anyone who has the determination and inspiration to do it despite how hard it is. But no one is a born writer. It takes work and study to learn how to write something other people will want to read. I'm sorry to say that this author isn't there yet.

First of all, I was impressed with the choice of narrator for this book. I really love it when a new writer is smart enough to get a good narrator. It shows an understanding of how audiobook sales work, and it also shows that they care about what happens to their end product. Beth Stewart was good here, and she will get better. I'll definitely be looking out for more books read by her.

For her part, the narrator read the book as written, which is what she was hired to do. As for what she read, however, the first few chapters are clunky and amateurish, so much so, that I was surprised that this author even released the book to be narrated, much less went to the considerable expense to publish it unedited.

The problems include tense changes. It was clear that the author was experimenting with POVs, and hadn't done a thorough reread and edit to make sure she'd caught all the changes for the final draft. But the tenses and other strange word choices are not the only things that kept pulling me out of the story.

Another problem is that the author started the book in mid conversation between characters she had not introduced. I had no idea who the people were or what they were talking about, or even what was meant by some of the words used. There was a long chunk of exposition in the beginning of the book, added I suppose to provide background information from book 1, (which I did not read), but unfortunately, it was written as if there had been a list the author was working from, instead of the information being seamlessly woven into the story. Each item the author thought I needed to know was described in a brief few sentences that didn't actually explain anything. No author, not even those who have written long popular series, ever takes for granted that a reader is going to remember the important plot points from a previous book. Summarizing previous plot points is an art form all it's own, and one this author needs to figure out.

The premise of the story was unnecessarily complicated by odd word choices and the introduction of characters who didn't make sense in the context. A former enemy is a member of the group but they still don't trust him for some reason; she's separated from her mate and want's to return to him but I don't know what's stopping her.

The story is about rogue shifters forming a pack in order to "destroy packs," but it took me a while to figure out that she was referring to werewolf packs. Without benefit of seeing the book in print, I was left to wonder if she was referring to 'destroying pax', or peace among the werewolves, nor could I figure out why rogues who want to destroy all packs form a pack of their own. It just didn't make sense to me. She never said they wanted to 'destroy THE packs' -- just 'packs.' Odd and confusing.

Overall, I think Bethany Wicker could become a good writer; she has a lot of imagination and the desire. But she really needs to find someone who will read her work and give her honest feedback, as a lot of the problems could have been caught in the draft stage. Also, I would recommend attending a writing workshop or class where she could trade ideas with other budding authors and get good feedback.

I always hate giving a bad review to a new writer, it's like kicking a puppy. I hope that if Ms. Wicker reads this review, she will understand that this is not a criticism of her as a writer, just of the editing of this book. She should definitely keep going provided she can get the honest critique -- at the very least -- of her friends and family. Keeping in mind, of course, that a thin skin for criticism is an insurmountable barrier to improvement.

I'll end by quoting an Amazon review that I thought did a good job summarizing other issues. It reads as follows:

"This book is a bit confusing to read, there are too many plot mistakes. In one section a character's sister is upset that her brother was killed . . . a few pages it changed from brother to boyfriend. Ace was killed and a few paragraphs later he was in a meeting to plan an attack. Just really needs editing. It was frustrating, didn't finish the book."

I was given a free copy of this book for an honest review through Audioblast.

Decent YA Story With Unique Ideas, but…..

… The cover of this book looks awesome, and I was very excited to listen to the story, but this is one of the those times, I was reminded you can't judge a book by it's cover.

Overall, the story was not bad, but there were multiple scene throughout the story I had a hard time following the plot. I did like some of the concepts in the story and thought they were original, like the lead female character being both a Luna and an alpha. However, the flow from one scene to the next was disjointed and left me confused on what was happening. The whole plot around Dash, and the rescue/escape had me confused. Now, this could be the story did not hold my attention, and I missed something, or I should have started with book one.

Beth Stewart did a really good job on the narration. I've listened to several books narrated by her, and liked each one of her performances.

I received this audiobook in exchange for an honest review, and normally I'm easy to please, and fall in love with almost everything I listen too; however, this plot didn't come across as well written and thought out. I would have loved more POV's, and a smoother transition from scene to scene. But still that cover is kick butt!

This is the second book in the Aluna Series. I think I may have enjoyed this book a little more if I had listened to the first book. I would not consider this a stand alone book. Definitely start with the first book of the series.

Interesting concept in that Aluna is a Hybrid, a combination of both Alpha and Luna. Interesting and entertaining having some of the hunters and the wolves joining together to fight.

The story starts to flow more smoothly and gets a lot more entertaining beginning at Chapter 4.

It took me a while to get into the story. For me the story did not flow smoothly in the beginning, and at times it just felt disjointed. Many things just didn't make sense. Things that Aluna did or allowed to happen while she was in the company of Dash. Aluna comes across as a strong main character but her actions in the beginning contradicted this fact. Regardless the story overall was enjoyable.

This is the first time I have listened to a book narrated by Beth Stewart. Her narration was really pretty good. Clearly spoken. All her character voices were really good. Very easy to tell which character was speaking. I would definitely listen to her narrate other books. In the beginning of the book the narration did flow smoothly, but I'm not sure if this was due to her narration or the way the book is written.

This audiobook was provided by author, narrator or publisher at no cost in exchange for an unbiased review courtesy of AudiobookBoom

like the first book, this one captivated me and kept me wanting more! the plot line and adventure kept me on the edge of my seat. I connected with the main character and followed her emotional rollercoaster with every up and down. another great book by this author!

this audiobook was provided for free by the author, or publisher in exchange for an honest, unbiased review courtesy of audiobook blast.

wow, what a story

This is a unique shifter story I enjoyed it. You have your werewolf, hybrids, and the human hunters. Which leads to action. The narrator was good. This audiobook was given by the author, narrator, or publisher at no cost in exchange for an unbiased review via Audiobook Boom.”