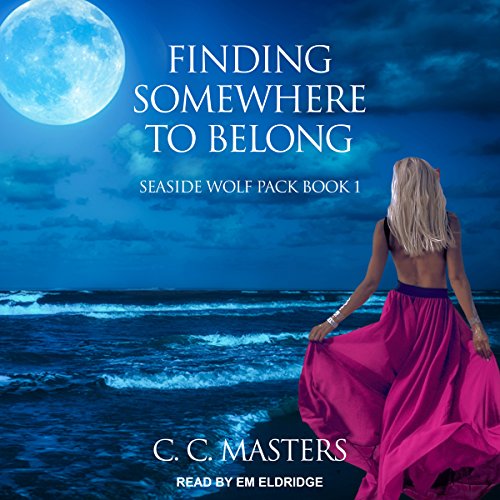 Anna is a lone wolf who has been hiding in fear from her own kind since she realized what she was. When the woman who had taken her in and nurtured her is brutally murdered, she sets out to find justice.

She is quickly found by a local Wolfpack during their investigation into the murder of a human on their territory. Anna finds unexpected allies in the Seaside Wolf Pack and realizes that there might be a place for her to belong in their world.

She starts to realize how empty her life has been when six wolves in particular take her under their wing and make it their goal to bring her into the fold. Will she finally find a place where she belongs and a pack that can give her the acceptance she craves? Contains mature themes.

What listeners say about Finding Somewhere to Belong

Everything had decent potential. It came across as too "chirpy " for my taste. I couldn't decide if it was the narrator or the writing.

I seriously am confused by these type of books

This story could have had potential. Unfortunately I didn’t realize it was a reverse harem story when I bought it which really disappointed me. I don’t know what these young readers are into now but every reverse harem type books I’ve tried getting into are YA novels. Very PG, no G rated. Why would you make a reverse harem book for a young teen audience??? That really confuses me. If it was made for a more adult audience with a lead that acts her age, this would have been a great story. I like the theme of it. But alas, adult it was not. The LF is a 23 or 24 year old who acts like a 16 year old. She has a brat friend who she lets walk all over her and is the rudest snob like any other high school drama book you’ve read. And the lead lets this twat do it because she feels she deserves it and the twat can’t help it. She’s supposed to be smart and works at a military base but her wolf chases fireflies and butterflies?? Give me a break. She has a teenage temper AND supposed to be the ONLY female wolf. On the planet. Right. It just makes no sense. I like adult books, not these books where the LF blushes every time a guy smiles at her. I want the female lead to be strong, knows what she wants, who knows her own skin, and can take care of her self. If your going to make a shifter story where there are no other female shifters, then make this girl act like a dang adult. What are we trying to tell the YA audience this book is trying to target? Seriously ridiculous. Stopped reading, asked for my credit back.

I love this audiobook! The narrator isn’t my favorite but that doesn’t take away from the story.

So, this story is practically swiped by an 8 year old from the Finding My Pack series. Same set-up, same plot, VERY similar characters (including the effeminate male fashionista beau and the brooding, massive beau). Even many of the phrases are copied. Smaller instances also, like the laser tag. Seperately, the excessive time and descriptions given to menial things like (literally the entire) cooking process don't add value to the story. You're stuck listening to seven minutes of The Cooking Channel as you impatiently wait for something to happen. The writing, also. Sweet geezus, the writing. " Let us go to the car in order for you to go to work. " instead of just "let's go to work". I was going to blame the narrator, but this is a writing (or lack thereof) problem that she got stuck with.

The reason I'm all riled up is because Finding My Pack is at the top of my Top 5 Must Reads. I'm fiercely protective of the sweet, clever, unique story that got me hooked on RHs. Unlike this story, FMP is amazing. If you're reading this before deciding where to spend your credit, I'd strongly advise you check out Finding My Pack by Lane Whitt instead. And if you've just finished that one and you're looking for a chaser, I'd steer you away from this one. It's too similar but poorly written.

Are you sure she is not in high school? The book had me feeling she was a teenager, her voice is not helping. It’s a teenybopper book. Not what I was looking for.

This was a great listen with a lot of character build up. This was a clean listen with hints of abuse in the LF past. I didn't even know that this is a reverse harem story until I looked up the next book. I don't know why I start new books without the whole series being out...uggg! Now I have to wait. It was a little slow at first but it then picked up. Well worth the credit.

The book shares the same premise as My Pack which already exits and is significantly better. The writing is so basic that adjectives are just added to the end of most of the sentences instead of phrasing differently. For example, She smiled warmly, he said gravely, and he went outside reluctantly. When it all feels the same it becomes challenging to listen to.

If Other Girls Meme was an Audiobook

Anna isn't like other girls. She is a super special super rare female werewolf. She doesn't wear heels and she isn't a spoiled selfish brat. The only other women in the book are a paranoid mothering grandma type and a horrible friend. On top of the above mess, Anna blushes at everything. I mean every man. Because like any good reverse harem there are lots of hot men that like Anna and she has no clue! And so the story is squeaky clean, which is a waste of a harem in my opinion.

This is a slow moving story. It's more of a slice of life with lost of time spent doing chores and cooking. Watch as our heroine simultaneously lusts after and mothers college aged twins and blushes her way into the hearts of her pack.

Despite its flaws, dear reader, I was hooked. I could not stop listening even as Anna's increasingly complicated dinner menus left me exhausted merely at the thought of cooking them.

It was a nice introduction to the series. It introduced a number of the main characters and gave some background on them as well. The book was interesting enough to make me want to continue the series, but it doesn't have me itching to know what comes next. But I do plan on continuing in order to see the characters grow along with the series.

Em Eldridge is a really good narrator. Her voice is pitched a little high but not irritatingly so, it was an adjustment getting used to her compared to what I'm used to. However, once you get used to her voice, you'll see that she does really well with the male voices compared to other narrators. I had no problem with character differentiation, which is a major plus in my book.

I look forward to what else this series has to offer and cannot wait to continue.

Warning book 4 is not the last book in the series

I titled a warning because I started this series thinking the last book is book 4 but after reading reviews it is not. I hate when I start an audible series to realize the entire series is not available on audible. So I love RH and the connection of the bond within the group is very important. That said the build up of the connection between the characters in the first book is pretty good. A little long winded and slow and no steam. Not even a hand hold or kiss. I enjoyed this first book but felt it dragged out at times and I also prefer a little more steam