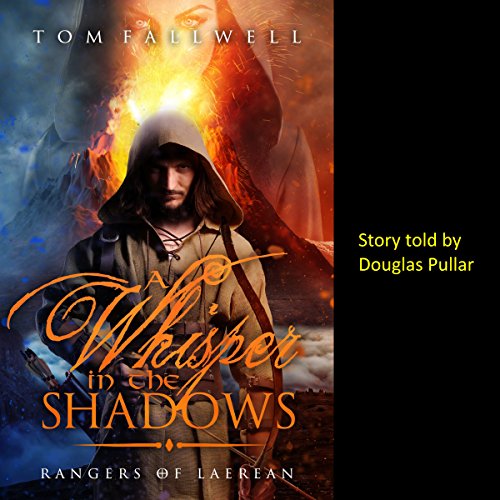 A Whisper in the Shadows

A Whisper in the Shadows

Baric is one of the famous Rangers of Laerean, a group dedicated to protecting the people of the Lands of Hir. Assigned to a task with a beautiful and exotic Vaar'da assassin called Whisper, Baric promises to help her solve the mystery of her recurring nightmares that are eating away at her soul and filling her heart with fear and despair. The quest becomes more complicated when those nightmares lead them to an artifact of unbelievable power that threatens the entire world they live in. The quest soon becomes a dangerous mission for the renowned Rangers as a small group undertake a mission into an area of Hir that men do not travel, where monsters roam and thrive. They must delve deep into the bowels of an active volcano, Mount Scorch, to stop the impending disaster that looms before them. Into the very heart of the territory ruled by the demonic Manenase. The fate of their world depends upon the courage and skills of the group of Rangers and their Vaar'da companion. Can they survive the quest and stop the impending devastation? They must solve the mystery of...A Whisper in the Shadows.

Im not sure why this book has so many 5 stars and overwhelming gd reviews. It must be because most of those ppl are either young and have yet to experience true fantasy storytelling, or just dont know what depth and quality means?

Its not a bad book, at all. I enjoyed some of it. The problem with it is that it has no depth of the characters, and is incredibly fast pacing and skipping big gaps in timeline where the author 'tells' us how to feel. Its like Lord of the Rings. Its got dwarfs and elves and humans, trols goblins and other beasts , just with different names ofc. But this book is LotR shortened to 10 chapters! B4 u get to know one charated ur off, the story skips a few months or more, and ur told in 2 line what happened in that period of time. You are told how to feel about the romance between the 2 main charaters, which I just couldnt get into at all, because I wasnt there when it happened!!!

Its told in third person, which is never great for these types of books, from my POV at least. I couldnt connect with any of them because of that and the skipping months ahead almost for each chapter. Its also predictable.

Overall I havent decided if I want to read the next book yet, because this one just felt like such great potential with a huge world building opportunity, but it feels like the author gave up and just wanted to finish and skip all the details and backgrounds. This book was ok, but mayhap it gets better in the second one!

Review for the audiobook version read by Douglas Pullar:

All things considered not too bad a performance, except for the fact that he is way too low when he uses his female voices and whispers, couldnt hear half of it, and oposite, very loud when he yells something. Also the word Hir, which is the name of the land there, he promounces like HER. Throughout the book specially in the beginning that word is there a lot and its like the word occult in the followups by Terry Goodkind, it drives u fucking mad to the point wher eu want to throw the book away. >I< would pronounce it Hiirr or something like that, not her. In many places it sounds just stupid and it honestly pissed me off because I felt like it ruined the book a lot. But if this is the way the author wishes it to be pronounced then its not the narrators fault.
Low amount of different voices for all the characters. (less)

Where does A Whisper in the Shadows rank among all the audiobooks you’ve listened to so far?

A great adventure that reads like a classic. Interesting characters!

What was one of the most memorable moments of A Whisper in the Shadows?

Have you listened to any of Douglas Pullar’s other performances before? How does this one compare?

Too long for one sitting, but I loved it little by little

I loved Baric and Whisper.

The battles scenes were fantastic.

A Whisper in the Shadows by Tom Fallwell was an immense pleasure to read. As a long-time Epic Fantasy fan, I was immediately intrigued by the blurb and impressed by the cover.

This action-packed novel begins with a meeting with the Rangers of Laerean and an extremely alluring Vaar’da woman named Whisper (Raimerestha). Although the Vaar’da are described as arrogant and even elitist (and not too fond of humans), the rangers agree to a meeting and ask for possible volunteers (Baric) to aid the Vaar’da.

Baric is immediately captivated by Whispers’ beauty, exoticness, and nickname. In fact, after learning first hand how that nickname was earned, he decided to aid her in this quest…an enigmatic quest that was deceitfully represented, delineated in mistrust, and inundated with dangers—both physical and supernatural.

A Whisper in the Shadows will titillate every fantasy fans’ senses with numerous epic battles, magical elements, awesome creatures, new species, shadow walking, and shadow beasts. However, author Tom Fallwell has managed to integrate meaningful, ethical lessons in a manner that flows with the plot, resting beneath the layers of a magnificently crafted story.

Highly recommended for not merely fantasy fans (and Tolkien lovers), but also readers who love a well-told engrossing tale. There’s even a hint of romance to tickle the hearts of readers while delving into the greater aspects of the story. I’m on to book II!

~The audiobook is magnificent. I truly enjoyed Douglass Pullar’s narration. He has fantastic range and brought this story and its characters to life!~

For those who love the fantasy journeys once written by Tolkien and David Eddings, you will enjoy this sojourn to a time when travelers grew to know and fight for one another on a long expedition. I was quite put off by the narrator, unfortunately, and found the plot a bit too familiar, but sometimes it's the trip and not the destination that matters.

Would you recommend A Whisper in the Shadows to your friends? Why or why not?

No, but I may revisit the writer in the future and make a different recommendation then.

Would you be willing to try another one of Douglas Pullar’s performances?

Do you think A Whisper in the Shadows needs a follow-up book? Why or why not?

I'd prefer to see something new by the author, see him stretch into a different vein of storytelling. I'm not sure why this has such good reviews on Amazon, as I think it's always important for an author to know its worthwhile honing his skills and taking more risks.

there is always something happening to this pair in their quest. attacks, mystery, danger, and magic make for an interesting tale of high adventure. whisper is an assassin looking for answers that lead to a deadly game. bear is a Ranger hired to help, and quickly becomes a good friend. I am intrigued by the story line and look forward to seeing what the rest of the series has in store for us. there is no sexual content and what I would consider a small cliff hanger.

The journey drew me in, the fight scenes kept me hooked and the surprise at the end tells me there is another book on the way. What more could I ask for?