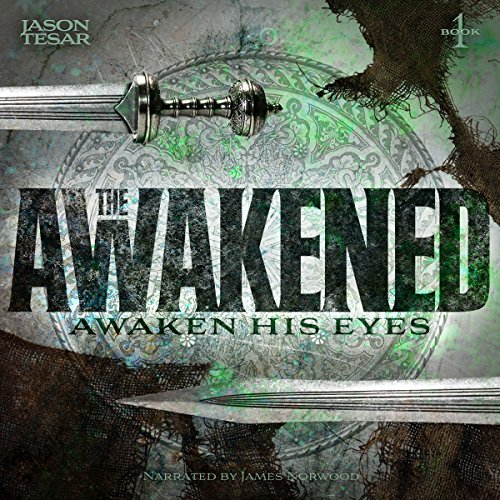 By: Jason Tesar
Narrated by: James Norwood
Try for £0.00

The History: Thousands of years ago, a renegade faction of angels abandoned the spiritual realm and began their inhabitation of earth. Worshiped as gods for their wisdom and power, they corrupted our realm and altered the course of human civilization. Amidst the chaos of a dying world, a prophet foretold the awakening of a human who would bring an end to this evil. But the cataclysmic destruction of our planet forced a rebirth of humanity. The prophecy faded from the memory of our kind and went unfulfilled - until now!

The Awakened: The physical dimension is fractured. All that remain are numerous fragmented worlds moving simultaneously through time, sharing a common history, connected by a guarded portal. On a parallel earth, in the city of Bastul, Colonel Adair Lorus disappears while investigating the death of an informant, triggering a series of events which will tear his family apart and set in motion the resolution of an ancient conflict. His son, Kael, sentenced to death after rising up against the cruel leadership of his new step-father, is rescued from prison and trained in the arts of war by a mystical order of clerics. Excelling in every aspect of his training, Kael inwardly struggles to give himself fully to the methods of his new family, or the god they worship. Maeryn, bitter over the disappearance of her husband and supposed execution of her son, fears for her life at the hands of her newly-appointed husband. Finding comfort and purpose in her unborn child, she determines to undermine his authority by reaching out to an underground social movement known as the Resistance. After being forced from his home, Kael's former mentor, Saba, uncovers a clue to Adair's disappearance. Sensing a connection to his own forgotten past, Saba begins an investigation which leads to the discovery of a secret military organization operating within the Orudan Empire.

What listeners say about Awaken His Eyes

I've read this series and really enjoy the books. The audiobook lets me experience it all over again!

This book kept me guessing what would happen next. I sympathized with the characters and found myself rooting for them to succeed. I think the author did an excellent job keeping me intrigued and wanting more. This is the first book I've read in this series and I can't wait to see where the story takes me in the next book. I love it when a good story sweeps me away to another time and place. Great job!

The author has the making of an excellent writer, however I felt short changed. This book has a great beginning but absolutely no ending. Nothing gels in any way. I would say this book is actually the first few chapters of a long book.
Towards the end you are left with 3 cliff hangers and forced to purchase another book in the series.
I don't mind purchasing books in series and have purchased many I will not be forced to purchase parts of a story.

As good as the book

I loved all 6 books in this series but it's been a while since reading the first book. So, before a long road trip, I got this audio book and was reminded why I love this series.