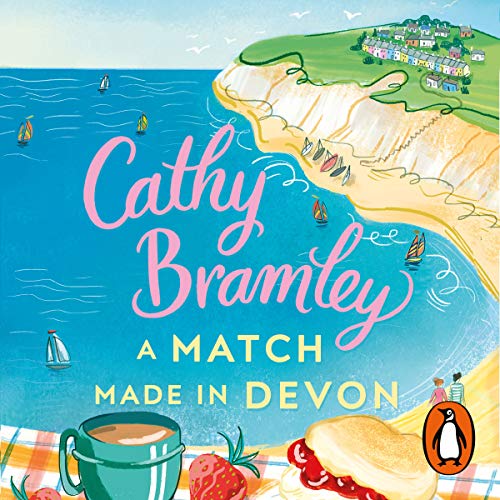 A Match Made in Devon

By: Cathy Bramley
Narrated by: Colleen Prendergast
Try for £0.00

Random House presents the audiobook edition of A Match Made in Devon by Cathy Bramley.

Sometimes you have to play a part to realise who you really are....

Nina has devoted her life to making it as an actress, although her agent thinks she’s more best friend than leading lady. But with her onscreen character about to be killed off, it might be time for a new role (on and off screen).

Lucky for Nina, life has a way of shoving you in the right direction. A falling out with her agent and his new star client leaves Nina’s life in tatters and her name in the papers. She is left with no choice but to flee the city, leaving nothing but an empty bottle of hair dye and her tiny bedroom behind.

Escaping to the West Country, Nina makes herself useful by helping her friend set up his holiday business in beautiful Brightside Cove. Soon Nina is learning there’s more to life than London and more characters in a small village than on the stage. But she won’t be able to avoid the drama for long: Nina’s star is finally rising, and it seems everyone wants a piece of her. So, when a beautiful man (and his adorable dog) catch her eye, it’s not long before London and showbiz start to lose their appeal.

But can Nina really trade the bright lights of the Big Smoke for the calming tides of this sleepy seaside town? Especially when - after years of chasing celebrity - it’s finally pursuing her.

Will Nina choose the bright lights, or has she met her match in Brightside Cove?

What listeners say about A Match Made in Devon

Such a lovely story! Not as predictable as other books which was nice. If you want an easy listen this is the book for you!

I love this author! She writes beautifully and really takes you to where she wants!
This book has a real innocent vibe.
Would recommend without hesitation!

This is a lovely novel easy to listen to maybe a bit easy to guess the outcome however I loved it and will recommend to my daughter.

A match made in Devon

I loved this book from beginning to end. such a sweet story and lovely characters all brought to life by the brilliant Colleen Prendergast, my absolute favourite narrator on audible.

as my first audible book I wasn't sure what to expect but the narrator was very good which made it easy listening..i havent read any of this authors books and I felt the story took a while to get going but i am glad I stuck with it as it got better ..

a charming and romantic story. thoroughly enjoyable with likeable characters who you feel invested in.

Predictable, drossy tripe
Like a People’s Friend story read by a simpering school girl practising for GSCE, however, I ought to have known better. It was a whim, it was free and I had a longing for a Year in Provence style getaway. Hugely misjudged on my part so my review is misplaced

Only bought it in a 2 for 1 sale so my mistake. If you love People’s Friend stories, as my own dear Mum does, then it’s fine

Fluffy, predictable storyline which is what I was expecting from the title and cover. Narrator really irritated me though. No emotion at all, it was read like a shopping list at times and Peter and Jane at others. Disappointed.