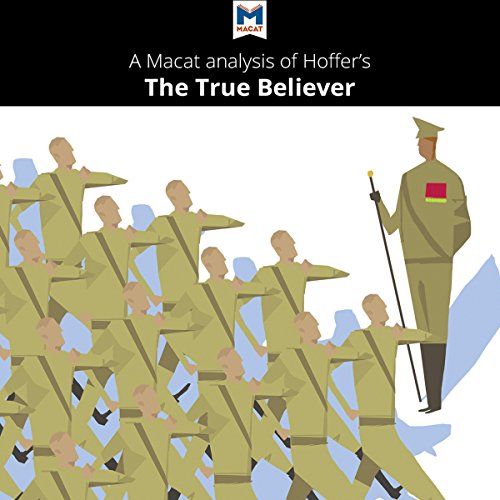 A Macat Analysis of Eric Hoffer's The True Believer: Thoughts on the Nature of Mass Movements

A self-educated man, Eric Hoffer was most likely born in 1898. He wrote in his spare time after doing shifts on the San Francisco docks, where he continued to work, even after becoming a successful author.

Hoffer began writing The True Believer in the 1940s, as Nazism and fascism spread across Europe. Most analysts who were trying to work out how these movements became so powerful focused on their leaders and the ideas they trumpeted. Hoffer focused on the followers. He saw that people joining mass movements all had common traits. Feeling worn down, they had lost their sense of self-worth and saw in the movement a way to restore some meaning to their lives.

A half-century after the book's initial publication, the terror attacks on the US of September 11, 2001 brought it renewed attention. Why? Because Hoffer created a work that explains not just the events of his day, but the events of ours, too, giving us a way to understand why people behave in seemingly irrational ways.

What listeners say about A Macat Analysis of Eric Hoffer's The True Believer: Thoughts on the Nature of Mass Movements

True Believer is usually read 2 or 3 times because it not an easy book to read.... I thought this would be much more detailed in its analysis.... it used words and assumptions I never saw in the book.... it over simplified what Hoffer wrote

Not a summary. More of a professor's review.

I got this thinking it would be a summary of Eric Hoffer's book. But it was more of a sociologists/professor's review of the book. The narrator discusses a lot about what was going on in the world at the time the book was written. Nice info to have, but I really wanted the content of the actual book. I ordered it from my phone, and didn't notice that it is an "analysis," not a summary.

I only made it through about 30 minutes of this version. I tried to skip ahead to see if there was more about the original book content. If it was there, I couldn't find it.

Holy repetition. Snooze fest that missed the boat on Eric Hoffer’s work. Can’t recommend the Audible version, but the book is good.

Appears to be written by the very machine E. Hoffer spoke up against.Unfortunate the book is not here to defend itself against this poor analysis.

Its not the True believer book by Eric Hoffer.

Its a good insight about the book. I originally thought I was purchasing the actual book sorry my mistake

Extremely repetitive. The same 2 sentence summary is repeated many times. If all of the redundant content and biographical context were removed this book would be 1/3rd the length.

Enlightening. Very informative. As I look back on mass gathering/protest, I now have a greater appreciation for how many originate.

don't let others think for you. read Eric Hoffer.

I wanted to see what they would use as their rhetoric. and it fits with what I have seen and read and listened to before. don't let them regurgitate the ideas they want you to have back into your head. plus their spin on it added into it. chew your own cud.

The narration was clear and distinct, a pleasure to listen to. Unfortunately there was too much repetition of certain points about Hoffer’s life and well known background. I would have liked to have heard more references to Bethel’s biography of Hoffer that could have explained his suppositions put forth in The True Believer. Although I read The True Believer a few years ago my curiosity has been piqued enough to re-read it.