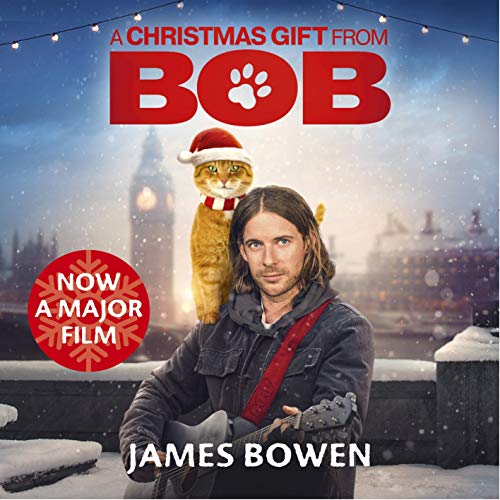 A Gift from Bob

By: James Bowen
Narrated by: Kris Milnes
Try for £0.00

From the day James rescued a street cat abandoned in the hallway of his sheltered accommodation, they began a friendship which has transformed both their lives and, through the best-selling books A Street Cat Named Bob and The World According to Bob, touched millions around the world.

In this new story from their journey together, James looks back at an early Christmas they spent on the streets and how Bob helped him through one of his toughest times - teaching him the true meaning of Christmas and bringing home to him in how many ways Bob has saved his life.

What listeners say about A Gift from Bob

Another Thought Provoking Piece Of Work.

Have listened to Streetcat, World According To and this book in succession. Series has genuinely moved and inspired me. No matter what your walk of life everybody has their low points and James and Bob have helped me to cope with some of them over the last few weeks. Thanks guys. I hope you have another couple of books in you.

Well written, this book gives snapshots of life on the street. It outlines the tougher aspects of street life but is beautifully written to show the happier aspects and opportunities that we are given in life.
I whole-heartedly recommend reading the other books in the series.

Great book for cat lovers n all with heart for ppl

I fell in love with this book cause of Bob the whole series of books it's great but it's opened up my eyes big style where homeless big issue sellers are concerned I never gave them a though but now will always donate what I can till I done books never really understood the whole big issue at all.

Since watching the film, I’ve fallen for bob. Animals really do know when you need them, even when we don’t know ourselves.
I am hooked on this pair and need to hear more. Lovely book to read leading up to Christmas x

A gift from bob

If you love cats this story is a great adventure of the car named bob.😁

this is not as good as the original first book. many things are repeatative from the first book.

If you like Street Cat and The World According to Bob, this is in the same vein but shorter. Details about James' background are a bit grittier in this story and I feel I know James better now. I was a bit concerned that I'd find another episode about Bod repetitive but this wasn't an issue at all.

It's set at Christmas (or Christmases) but I listened to this in January and thoroughly enjoyed it.

James Bowen, now a rich and famous author, looks back at his last Christmas struggling to get by on the streets of London with his faithful cat, Bob.

A gift to remember

A great Christmas story. It warmed my heart and gives me hope that all is well with James and Bob. Still would love to meet them both, perhaps one day when I go to London.