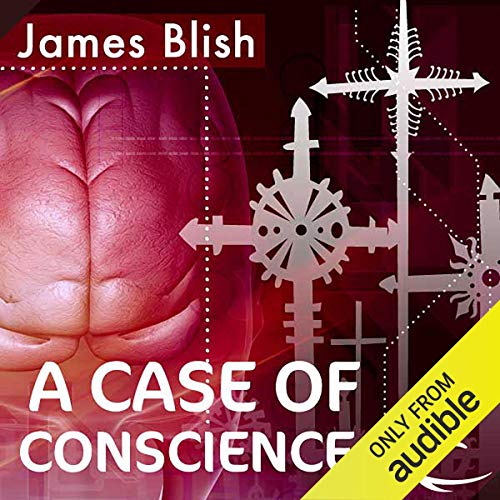 A Case of Conscience

A Case of Conscience

Father Ruiz-Sanchez is a dedicated man - a priest who is also a scientist, and a scientist who is also a human being. He has found no insoluble conflicts in his beliefs or his ethics...until he is sent to Lithia. There he comes upon a race of aliens who are admirable in every way except for their total reliance on cold reason; they are incapable of faith or belief.Confronted with a profound scientific riddle and ethical quandary, Father Ruiz-Sanchez soon finds himself torn between the teachings of his faith, the teachings of his science, and the inner promptings of his humanity. There is only one solution: He must accept an ancient and unforgivable heresy -and risk the futures of both worlds . . .
©1958 James Blish (P)2008 Audible, Inc.

"Kudos to Audible Frontiers for carefully audiobooking this Hugo Award novel. A Case Of Conscience is an SF classic!" (SFFaudio.com)

I had long been hesitant to listen to this audio book because one of the first reviews was truly awful. I can't begin to guess why that original reviewer bashed this audio book. It's an excellent read of a very good Hugo winning story. I guess the lesson I learned is "you can't always rely on others reviews." This audio book is highly recommended from me.

Excellent Narration of a Classic

This was my first audiobook, so I was a little skeptical. I ordered it only because it wasn't available as an ebook and it is difficult for me to get print books where I am. I once recorded ebooks as a volunteer for Recordings for the Blind, so I know how difficult the task is. But, this narration was masterfully done with good characterization. It was a pleasure to listen to.

James Blish is one of the pioneers of modern science fiction, and this is one of his seminal works which has served as an inspiration to many contemporary authors as many of them readily acknowledge. It must be evaluated in view of the time in which it was written. Blish explores issues that are timeless, but may take other forms in this postmodern area, or be completely ignored in the fads of our time with its obsession with apocalyptic and dystopian themes.

This book made quite an impression on me when I read it many years ago when it was breaking new ground in science-fiction. It is still captivating, though the ending is weaker than I had remembered.

Listening to this as an audiobook gave a new perspective which I really enjoyed.

Have you ever wonder how the Catholic church would deal with sentient extraterrestrial contact? This is a science fiction story first and a thought provoking theological and philosophical study second. Originally written as a novella, and then expanded into a novel it very much feels like two separate stories.

The strong story is of biologist, biochemist and Jesuit priest Fr. Ramon Ruiz-Sanchez. He is part of a scientific mission to determine what kind of relationship, if any, Earth should establish with the Lithians. A sentient lizard like species with no religion or concept of morality, yet instinctively established an idealistic Christian society. This causes the Priest to reach a rather unexpected, but plausible once explained, conclusion dealing with an area of theology I was unfamiliar with. I won't spoil the surprise but it causes a crisis of faith he must struggle with both internally and with the church.

The other weaker story deals with an alien egg being brought to Earth, raised essentially isolated in a lab, and introduced into human society. Without morals (not in their biology) he challenges the establishment and human nature.

The world is very well developed and thought out. The aliens are well realized, they are not just 'different humans.' They are lizard like who think differently and even scientifically evolved differently due to a lack of metals. It is well thought out and described.

However, like any classic science fiction the future didn't turn out the way the story tells it. Earth cities have turned into underground 'shelters' due to the nuclear cold war scare. It's an interesting alternative take and nothing too jarring. Interesting how influence of talk show personality and celebrity culture still relevant today.

Dealing with religion themes can be difficult but I thought it was handled well, with respect and the author has done his research.

In fact, I found the forward most interesting. The author accounts the feedback he'd received from theological scholars, including the actual Church's guidelines on dealing with extraterrestrials. Essentially there are three possibilities, the aliens have no soul, they have a soul and share our state of having fallen (original sin) or they haven't fallen an are in a state of grace.

If you like heavy themes of philosophy, morality, and not scared off by religious themes give it a read.

Read this a long time ago and found it interesting. This time it is much more engaging. Perhaps it might be that it is because I am a practicing Catholic, but the questions that are raised resonate and interest me. Do get this one.

I read this on my quest to read all the Hugo SCI-FI best novel award winners. This one the award in 1959 and is no longer in print. Could not find it on amazon, but audible had it. As with much of the 50s and 60s, the story line is kind of apocalyptic, although this one has a different kind of twist. I will say it makes you think. It is a good book that pays attention to catholic doctrine (you will understand that when you read it) but takes kind of a difficult position on it.

It made me think. I was not sold in the end by the book, but it is thought provoking. The performance is good - not great.

This sci fi novel was written in 1958 as taking place in the future, i.e., the early twenty-first century! While that future time has arrived, luckily the world envisioned has not! The story raises issues worth considering. It starts on a planet in another solar system that is just a bit too perfect and ends on the moon. But much of the novel takes place on earth, but not one I'd want to live on. Anyone having familar with the bomb cellars of the 1950's and the drills at school for what to do when the atomic bomb is dropped will understand why/how the author came up with it. It was a good listen -- I doubt I would have enjoyed it as much if I'd read it instead.

Moldy Oldie still gets it done

This is a decent listen. Once I had started I kept going back to hear more even when it was not so convenient. Some strange anomalies such as space travel and tape recorders in 2050 were a little offputting. But this sort of thing fits into the "Where is my flying car?" category of criticism. The crux of this novel is a moral dilemma forced on a Jesuit priest.
There is no evidence to suggest that James Blish published this work himself. The novel is knowledgeably critical of the RC church, but no more than of mankind as a whole. The ending is anticlimactic in that while a world is destroyed, nothing is really settled. If you are interested in an off-the-wall take on original sin, the fall, and salvation as viewed by a writer-scientist of the mid-twentieth century this would be just your meat.

A tale of two books

I am on the fence. I loved the scenes that took place on Lithia. It was hard SF at its best- a compelling alien culture with good characterization and just the right mix of real science to give it flavor. After the scene changed to earth, however, the book was no longer compelling or entertaining to me. It started with the conclusion on Lithia- The father decided that Lithia could only be a planet created by the devil and he wanted to ban all travel there, so why would he agree to take a Lithian egg, which by his own logic could only contain a being created by satan, back to earth? It makes no sense at all, and neither does most of what comes next. With that one decision on Lithia onward, none of the characters are any longer sympathetic enough for me to care about them. The intelligent dialogue, scientific approach and great scenery are all dumped in favor of a series of actions that are literally incomprehensible carried out by characters who are uniformly dull and uninspiring.

Blish's concept of involving a man of the cloth to assess the advisability of human contact with an alien species is an outstanding entry in the seldom-touched interface between religion and sci-fi. This is complemented by masterful story-pacing and execution reminiscent of the Foundation Trilogy's economy of crisp plot progression. However, this applies only to "Book One" of the novel, which is the novella as Blish originally wrote it. "Book Two" is his attempt to make it into a full novel, and I almost wish I stopped at Book One. Nevertheless, an outstanding piece of work that should be on any serious reader's shelf--or Audible library.

Too deep in both science and religion .

Just what I said in the header. The story is a good idea, it just got wat too philosophical.