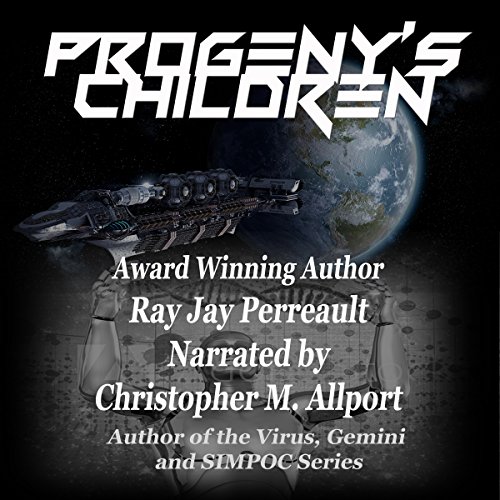 Humans were forced to leave Earth when the pollution became a threat. Mankind could no longer live on the planet. They traveled 189 light years to their new home they named Horizon. When they left Earth they abandoned much and over the years they grew, developed, and matured. A long time in humanities' future they returned to Earth and found something else living there.

What listeners say about Progeny's Children

Expanded from two earlier shorter stories, Progeny's Children recounts the evolution of what is left behind on earth when it's human survivors abandoned the planet they had rendered uninhabitable and what happens when their descendants return.

The production is excellent, and Christopher Allport is able to convey robotic voices without becoming unpleasant to the ear then, seamlessly switch to more human dialogue. No easy task, and he makes the futuristic world feel much more realistic because of it.
This is an excellent story, thought provoking and exciting without constant confrontation of a military type. It looks into the nature of society and upbringing and changes that could be made for the better of humankind.

My one major criticism is the over use of repetition in explaining parts of what has gone before, especially as I tend to listen to books over several consecutive hours. However, even this could be helpful if heard in short bursts.

Ray Jay Perrault is a modern classic-style science fiction writer of great talent and insight. All of his stories are well worth reading and this Audible production enhances the already absorbing and enjoyable book.

The story was great and took a few twists and turns with some surprises, both good and evil. The author combined two of his previous short stories into this full length book. Great scifi book

Book and narrator were just okay.

- - Gifted copy for review on audioblast - -

I know this is supposed to be a review about the wonderful story, Progeny's Children written by the talented Ray Jay Perreault and narrated by Christopher M. Allport....BUT I first need to rant a bit about the deep emotions this book has brought to the forefront. There is a lot of good about humankind.... BUT there is also a lot of hate, bigotry and fear. Sadly those ruled by the latter are why visiting aliens are going to wipe out the human race, unless unlike some humans and more like the wonderful US and THEM in this book they take a step back and realize that all types of beings are worth saving, even humans.

Now onto the book. The story was wonderful and definitely took a few twists and turns thus providing some surprises, both good and evil. Perreault combined two of his previous short stories into this full length book brilliantly, "Good Morning... Processes Must Be Improved" and "Progeny". That being said I feel that certain details of the various issues were repeated a few too many times when new discussion on that issue was to be undertaken. Also the production decision to put a beep at the end of a scene was a bit annoying, the pauses in the vocals was plenty of notice that the scene was changing. These were minor issues and did not detract from the overall appeal of the book.

Christopher M. Allport has some tempo and vocal qualities similar to Wil Wheaton who I am very familiar with and definitely appreciate. I also hear bits of sarcasm in Allport’s manner that as always appeals to my inner snark.

I am so appreciative to have been given a copy of this book for review and I look forward to future work from the author and narrator.

If you could sum up Progeny's Children in three words, what would they be?

What other book might you compare Progeny's Children to and why?

Have you listened to any of Christopher M. Allport’s other performances before? How does this one compare?

I received a free copy of this audiobook for an honest review.

After 1300 years on the planet of Horizon, descendents of Earth are ready to return home. They hope the planet their ancestors ravaged has regenerated. What they find is unbelievable. With the passage of time, things like superiority are still a part of human nature. Thinking robots and human cousins won't stand in the way of a ambitious leader. I was gifted this from the author.

What an amazing scifi story. This was never my first choice for a genre. How wrong I was, I’m completely hooked. The narrator was just perfect. Felt as if I was a part of the story.

This story was very enjoyable and left the reader with a lot to think about.
It is good to find an original story and I would recommend this as a great read

I love a good Sci Fi story, and this is definitely good. Mr. Allport does
an amazing job with both the human and the robot voices. I really
enjoyed listening to it. I would highly recommend it to everyone.

This is an interesting and thought-provoking sci-fi story of political deception, human aggression, discrimination and moral dilemmas. This combination of his two short stories, Progeny and the Circle is Closed, has made for an excellent story. The author melded them together to give us a great story where humans left a dying planet and traveled to a new world, only to return to a healed Earth many centuries later. To their surprise, they find a society of salient robots, the Us, and even more shockingly, a race of humans, the Them, created by those robots from DNA samples found hidden in another primitive humanoid type race. The narrator did a good job with this story; his tone and pace gave you the feel of robots but at the same time he managed to add individuality to the Us. Allport made the humans seem more animated than the Us, illustrating the differences well. I loved the contrast of attitudes in this story; from the Prime Ministers entitled, superiority, the all-inclusiveness and logic of the Us, the fear of the unknown and sheep-like following shown by the majority of the arriving humans, the open acceptance and intellect of the Them, and the slow rebellion against injustice by the Captain and others. It is not a simple story of good vs evil but rather one of the ability to see beyond one's prejudices, to act for justice and be willing to try to understand and accept that all forms of life have worth.

This book had an intriguing premise - what happens when humanity forsakes Earth for another planet, after making their own planet unlivable, and returns centuries later to reclaim their planet only to find it isn't empty?

This should have been an extremely interesting book, but I had a number of issues with it.

!) It portrayed humanity as totally monolithic in viewpoint and purpose. After 1300 years, a millennium on a new and welcoming planet called Horizon, their only goal is a return to Earth as soon as possible. The idea that any large group of humans could maintain such a monomania for a decade, much less a millennium, is completely preposterous.
2) When met with evidence of the Earth being populated by others, the Horizon government officials don't even bother to report it to the people who will be returning as colonists,
3) The most fully fleshed character in the book is a sentient robot, who is also the only character who shows growth.
4) The author uses repeated phrases and redundant explanations to give the reader very little information about either civilization and does it in a manner that would have been appropriate for a dry history textbook, not a Sci-Fi novel. The book seemed to go on forever, without saying much of anything.
5) The ending was abrupt and without any real explanation. The immediate crisis was solved by a Deus ex Machina plot and no effort is made to give us any idea how the long term issues will be dealt with.
6) The narrator delivered the story in a perfectly robotic style that went well with a textbook but did not enhance what should have been a novel.

I listened to the whole audiobook, hoping that the style would improve, but it didn't. In two sentences the author used the word "celebration" 6 times. At one point, a character repeated a complete conversation that had just happened in the book to another character, rather than the author saying "the Commander told his daughter what had been said".