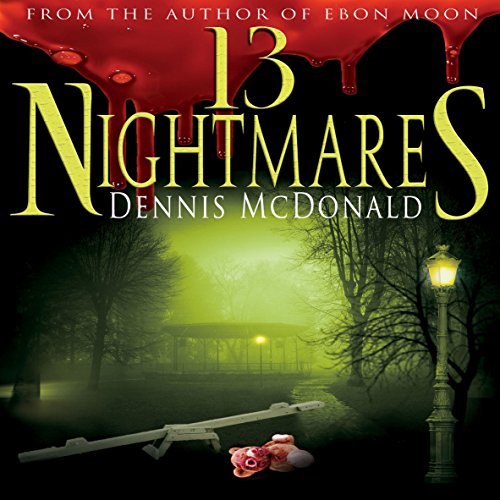 By: Dennis McDonald
Narrated by: Michael Rubino
Try for £0.00

Thirteen tales of original terror penned in the dead of the night with only the glow of a computer for light. The collection of short stories runs the gamut of horror. Within its bloody minutes you will find a slasher clown, a blood red church, a little girl locked in a closet, a haunted sex doll, etc. 13 Nightmares is a fine collection of terror for the short story lover, but be warned. Some of these stores are not for the faint of heart. Do you dare enter a world where the supernatural, the macabre, and the horrific collide?

What listeners say about 13 Nightmares

I thought this book was thrilling, suspenseful, vivid and it reminded me of the Twilight Zone. The voice of the voice actor really brought the stories to life. I would definitely want to get an audiobook again from this author.

Would you listen to 13 Nightmares again? Why?

Absolutely would read this again.

What was one of the most memorable moments of 13 Nightmares?

Narrator read the stories with real interest and brought life to each character.

The stories come to life one by one.

I like the originality of the stories they were interesting, but not scary. Also some of the endings were predictable.

I can't recall names, but I will say that the stories got better as they went along.

I don't think he was good for the horror genre, he didn't let you know the story was finished. Not many changes in the voice, or if he changed his voice to show a new character talking, he sometimes wouldn't revert back to the voice when that character was talking, like in that cockroach story.

Only if there was a MST3K Version

I give the author a lot of credit, writing short stories with different twist is not incredibly easy.

This book was really scary but I still could not stop listening! Narrator did a great job playing each short story and character! Overall great book and listen!

Not the best I've heard

These short stories were average at best. Didn't find them particulary scary nor gripping. With most of the stories the outcome was fairly obvious from the beginning, this is really off putting. In addition the narrator was poor in my opinion.He just didn't fit with the stories.


*I was given this free review copy audiobook at my request and have voluntarily left this honest review.

every story kept me wanting more..i wish it had more stories! i love every bit

well worth the money

very nice collection of short stories that you'll eagerly devour on your way to flying through all of them.

Not a bad way to waste a credit

I like most who buys books on here to read/listen the reviews help me to decide whether or not to buy. IMHO this is a fairly good book. The stories are short and are fairly well fabricated. If you like Twilight Zone/Tales from The Dark Side style stories this is a good one to check out.