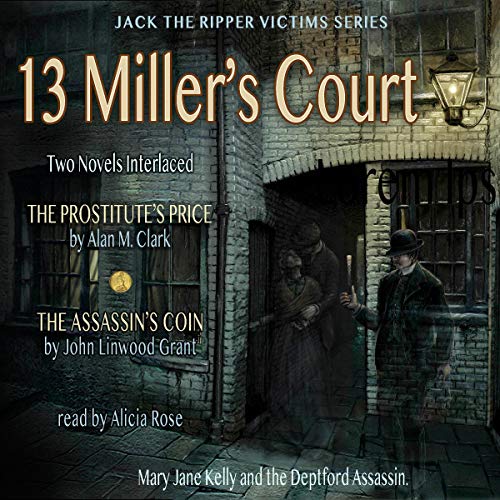 Two novels: The Assassin's Coin, by John Linwood Grant, and The Prostitute's Price by Alan M. Clark. Intertwined here, they share a single timeline and a single purpose - to lead you to 13 Miller's Court, the room made infamous during the Autumn of Terror.

The Prostitute's Price - A novel that beats back our assumptions about the time of Jack the Ripper. Not the grim story of an unfortunate drunken prostitute killed before her time, but one of a young Mary Jane Kelly, alive with all the emotional complexity of women today. Running from a man wanting her to pay for her crimes against his brother, she must recover a valuable hidden necklace and sell it to gain the funds to leave London and start over elsewhere. Driven by powerful, if at times conflicting emotion, she runs the dystopian labyrinth of the East End, and tries to sneak past the deadly menace that bars her exit.

The Assassin's Coin - She is Catherine Weatherhead, and she is Madame Rostov. She will lie. She will deceive. She will change history, for she is haunted, and murder speaks to her. In Whitechapel, all talk is of the one they call Jack the Ripper, but there is another killer in play, Mr Edwin Dry, the Deptford Assassin. The truth is not what you believe. It is what Catherine and Mr Dry make it.

What listeners say about 13 Miller's Court