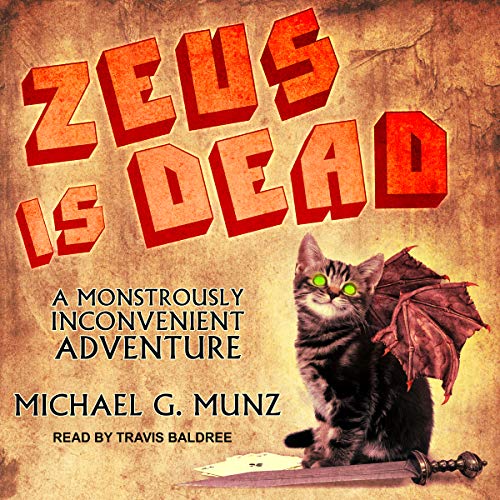 By: Michael G. Munz
Narrated by: Travis Baldree
Try for £0.00

The gods are back. Did you myth them?

You probably saw the press conference. Nine months ago, Zeus' murder catapulted the Greek gods back into public life. Now, the whole pantheon revels in new temples, casinos, and media empires - except Apollo. An overachiever with a bursting portfolio of godly duties, the amount of email alone he receives from rapacious mortals turns each day into a living hell.

Yet there may be hope, if only he can return Zeus to life! With the aid of Thalia, the muse of comedy and science fiction, Apollo will risk his very godhood to help sarcastic TV producer Tracy Wallace and a gamer geek named Leif - two mortals who hold the key to Zeus' resurrection. (Well, probably. Prophecies are tricky buggers.)

Yet, whoever murdered Zeus will certainly kill again to prevent his return. Can Apollo escape the murderer when he doesn't even know who they are? Can he do it before the muse gets cranky? Do the venomous bat-winged kittens terrorizing Nevada have anything to do with anything?

What listeners say about Zeus Is Dead

I really enjoyed this book, the plot what is very early Pratchett-est which is no bad thing.

And the performance while it took two chances to get by the end of the book you couldn't imagine anyone doing a better narration.

I remember first stumbling upon this book online as I was browsing further stories related to ancient gods. I was disappointed that it was not available in audiobook format and promptly made for the Facebook page of the author. He reassured me that plans were underway to have this book prepared in my preferred format. To say that the wait was worth it would be an understatement, even if it was a little over a year.

This book exceeded my every expectation. I felt the story had a Douglas Adams style vibe to it. The humor laced throughout these words was awesome and helped develop a much different portrayal of the ancient Olympians than I had previously envisioned in my mind.

As I found myself further into the story, I had to ask myself, what would Samuel L Jackson do? Why, the answer is quite simple, he would continue on this wonderful journey that mixes present times with that of the ancient Greeks.

This story introduced numerous characters that became instant classics. My favorite of these was the Guardian Tree. The Guardian Tree brought me back to another character named Turd from a previous series I have listened to. In the end, I found myself feeling like a bit of a tree hugger at a certain point in the story due to emotions evoked by Mr. Munz. Another instant favorite was our treat-style God introduced later in the story.

Another stylistic choice by Mr. Munz was the use of flashbacks to earlier chapters by chapter number. I also quite enjoyed the other miscellaneous dialogues that took place at the start of each chapter and throughout the book to ensure listeners/readers were paying attention.

This book was made even better by the wonderful narration of Travis Baldree. I could not imagine a better narrator for this story. His voice differentiation was amazing, especially in scenes that involved multiple characters speaking in rapid succession such as those involving the Erinyes.

This was quite the fun tale and one I cannot wait to listen to again.

Definitely a new look at old Gods. Punny and funny adventure and worth a re-read. Please give us the next book soon! Well written and read!

This was an amazing experience overall!
The story is extremely enjoyable, interesting and unpredictable. It has a few references that are a little out of place.
The performance is honestly the best audiobook I've ever heard. I'll look for more things Travis Baldree reads, for sure! He's great at making characters stand out during scenes with lots of dialog and his inflection reading never comes across as editorial but consistent to the story.
I cannot recommend this book enough.

A Slow start but a thrilling romp at the end

While the beginning took me awhile to find footing with by a thrid of the way in I was quite invested and feeling the rhythm of the story. it was a very enjoyable ride.

it was also amazing that the author personally assured me that there wouldnt be any personal triggers in the book.

I have just completed the book for the second time and found it even more enjoyable than the first, as it was easier to follow the beginning than before.


I'm looking forward to the next book :)

Get ready to laugh!

Great, glorious, godly, gobs of hilarity, if you need a good laugh, look no further than this gem.

book was very entertaining and perfect to listen to as I work. I also adore the narrator, he speaks so casual and naturally.

So funny, clever, and crazy! Loved it!

Zeus Is Dead
A Monstrously Inconvenient Adventure
By: Michael G. Munz
Narrated by: Travis Baldree
This is an Audible book I requested and the review is voluntary.
What a hoot! My cheeks are sore from smiling for hours! This was such a clever, snarky but not annoying, funny look at what life would be like if the Greek gods lived with us today. It is well thought out and so unique! It is so crazy, you don't know what will happen next.
I am convinced that the author is the brain spawn of Mel Brooks and Monty Python! This book is creative chaos in a genius fashion...lol! It kept me interested from the very beginning to end! It was a wild and crazy ride but I loved every bit!
Travis Baldree performed all the fabulous voices and made the story even better! He kept all the strange characters and their bizarre ways straight, I don't know how, there were a lot of characters. Comedy is not easy to do and make it come out funny but he was spot on! There were laugh out loud scenes and giggle scenes but most of the book I was truly smiling! Loved this book!

I really enjoy the pace and imagination of this book. The characters are well done and I’m eager to see where this story goes next!

Funny, Witty, Geeky, Excellent narration!
I enjoyed listening to every moment of it! A must read!

I should’ve listened to the reviews

After reading other peoples reviews saying this was overall a mediocre story I thought well maybe I’ll enjoy it and turns out everyone was right. The idea alone of having Greek gods returning to modern day society was super interesting and I feel like it was a wasted in this story. There were certain parts where I thought this is so silly I wouldn’t enjoy this even if I was reading this in middle school. If you want a fun story about Greek gods and modern day I would recommend the Percy Jackson series before this