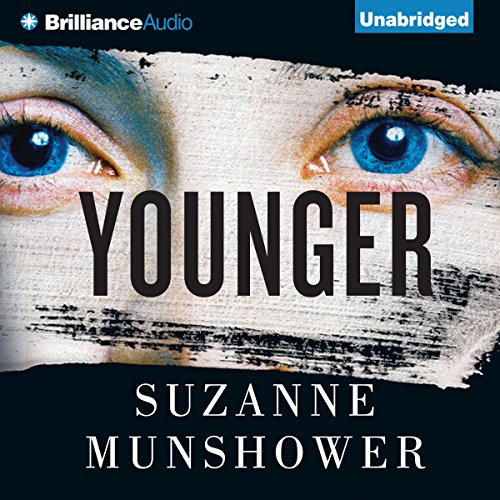 By: Suzanne Munshower
Narrated by: Joyce Bean
Try for £0.00

When PR pro Anna Wallingham gets dumped by her last client, she finds herself running out of options in LA, where looks trump experience. Desperate to prove she is still relevant, the fiftysomething accepts a shady job offer from Pierre Barton, secretive billionaire owner of Barton Pharmaceuticals. Isolated in a facility outside London, she agrees to test a new top-secret product guaranteed to make her look thirty years younger. Anna is starting to look on the outside the way she feels on the inside: ageless. But she soon discovers that her predecessor died under mysterious circumstances, leading her to research just who stands to gain - and lose - with this miraculous product. When Pierre drops dead in front of her, she takes off on a dangerous journey across Europe, hoping to stay alive long enough to uncover the truth.

With the hard-won knowledge that younger isn't always better, Anna is determined to escape and reclaim her life before it's too late.

What listeners say about Younger

Interesting story but not quite my thing!!

Got into it more as I went along and wanted to know it ended.

What aspect of Joyce Bean’s performance might you have changed?

Didn't care for her voice which was just above monotone. Didn't help me to care for the characters.

Did Younger inspire you to do anything?

Enjoy life more, not to get so hung up with image, everything we learn has a price that is more than face value.

Others may like this more. It's ok but nothing special.

This tale is about a woman who has been fired and down on her luck. She receives a chance to trial a new product that will take years off her. She is so excited to go and motivated by the money, she does not think too much about it until soon others are after the formula and her life is on the line when people seem to die. In search of the truth she realises she is in more danger than she thought.

This story was not really for me, it just hung around in my library for ages.

I just couldn't get into it.

Short on believability. Short on story. I had no connection with the protagonist and it dragged. Interesting concept, but just kinda flopped for me.

It Got Better Towards The End

The narrator did well, most of the voices were distinguishable, but a small few sounded the same. As for the story, I was ready to give it up half way through but decided to stick it out. It did get better but because it was a little difficult to keep my attention at the beginning and so many name changes for the characters, I didn't get the reward at the end. During the epilogue I was like who was that? I was a bit lost.

I probably will not listen to this book again, but I do appreciate the originality of the premises. It wasn't a great book but I wouldn't categorize it as terrible either.

Page Turner Keeps You Guessing Until the End

I thoroughly enjoyed the mystery surrounding this story. The end was okay - not really great or bad - just okay, but not too disappointing. The narrator is over-exaggerated and dramatic throughout the story, whether the subject matter required it or not. I'm not sure if it got better as the book went on or if I just got used to it and tolerated it because I enjoyed the storyline. It's still worth the read/listen.

A terrible book with awful narration.

I was grossly disappointed. A great concept executed horribly. I expected a thriller to be thrilling. This one wasn't even interesting.

Frustrating to read because of too many characters with multiple names. couldn't keep track of everyone!

Interesting premise for murder, (skin care products) and thought-probing analysis regarding the world’s obsession with youth.

Didn't hate this. The book plot did have some technical issues, but overall being fiction it was easy listening.

I enjoyed the story line. It really got me thinking about how I see myself related to my age.

It was a good story overall, but the writing could have been a bit better, especially toward the end of the book. The performance, was disappointing. The narrator sounds mechanical most of the time, her performance unnatural. The plot is definitely interesting, and it was a decent story to listen to, to pass the time.

I wasn't sure I would enjoy this audiobook. I did find some of the contrivances over the top, and the focus on brand name fashion and cosmetics distracting, but the narration kept me in the story as I yielded my disbelief. So, I did enjoy. And it was comforting to read a book whose main character is reaching that dreaded age of 60.