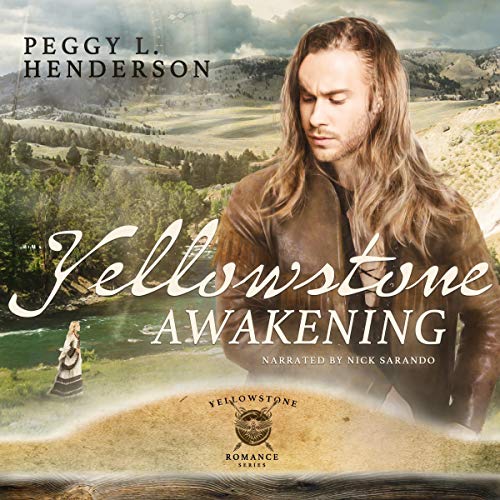 By: Peggy L Henderson
Narrated by: Nick Sarando
Try for £0.00

A man willing to risk everything, including his life and all he's worked for, to free the woman he loves from an impossible situation.

Kyle Russell has worked with prominent men, led scouting expeditions through the Yellowstone country, and irritated more than a few Indian braves, but he will never duplicate his father's legendary accomplishments. Captured by a group of Crow warriors, his plans of escape are derailed when a lone white woman is brought into camp.

Kate Ellen Devereaux is on the run. Her guardian is dead, and she is lost in the Yellowstone wilderness. Found by an Indian war party, she is brought into their camp and thrown at the feet of a white captive. If he has plans of escape, she won't be left behind.

Kyle's father may be a legend in the territory, but he never had to deal with an eastern lady full of secrets, a woman who disrupts Kyle's plans to see the Yellowstone area turned into a national park. Convincing her that they are destined to be together may be a greater challenge than gaining support for the park movement. Kate can't afford to show interest in any man, regardless of her growing attraction to her backwoods rescuer. Will her ultimate reason for rejecting him spell doom for their growing love, and the national park idea, or can Kyle find a way to rescue both?

What listeners say about Yellowstone Awakening

Nick Sarando is one of the worst narrators I’ve ever heard. He’s monotoned and emotionless. He ruins a great book.

I enjoyed this book every bit as much as the first two in the series. Admittedly it follows the same format and has a degree of predictability but it is a historical romance and part of a series so that was expected. The story and characters were fresh and engaging and it provided a welcome continuation of the Yellowstone saga. Nick Sarando did a credible job with the narration although he's not my favourite narrator.

Would you consider the audio edition of Yellowstone Awakening to be better than the print version?

Kyle Russell, son of Chase and Sarah, ( Yellowstone Redemption ) is a guide and scout for Yellowstone. On his way home, after leading a group of men through the Yellowstone Canyon area, his horse spooked and Kyle fell off into the hands of Laughing Badger, war chief of the Crow warriors and was brought back to their camp. Later, with his hands tied to a wooden pole, Kyle is desperately trying to think of a plan of escape, but he is shocked to see Laughing Badger and his warriors riding back into camp with a white woman on his horse. She appeared to be in bad shape and Laughing Badger pulled her off the horse and dragged her over to Kyle, where she sank to her knees. She looked up at Kyle with her blue eyes full of fear.....Great, Kyle thought, just what I need, someone else to save besides myself!

Peggy L. Henderson,once again swept me away, back to Yellowstone with her wonderful writing. This audio book has everything, romance, humor, danger, and suspense, plus it made me cry and I had to keep listening to see if there would be a HEA. Nick Sarando, with his beautiful narration of this audio book, made it very enjoyable to listen to. He has the talent to be able to use his voice to portray the different characters and make them so believable that they come to life. I am looking forward to the next two in the series. JudyE

I love this series and this book. It’s time we’ll spent and I’ve recommended Peggy Henderson as an author to many people. I have so say, however, that Nick Serando mispronounces words so often that it’s distracting for me. Hearth is pronounced as harth - not rhymed with earth. Calico and Hiram are also mispronounced. I wish he would take a moment and verify pronunciations of words with which he’s not familiar. Okay I’m done complaining.

I like the books, but the narrator is so whiny and doesn’t do the story justice. His female voices are better than his male voices. The other narrators used for the other books in this series are much better.

I loved this story and was excited that it was as good as the first 2 books in this series. I'd read this book a while back but realized I never left a review, so thought I'd read it again to freshen my memory on the story. I love how this author develops characters and you are hooked on the story from the very beginning. I always love a happy ending, and this book does not disappoint. Great story and I'm looking forward to re-reading the next book in the series.

This is another amazing story, set in the eternally beautiful Yellowstone region. Am excited for next book in the series!

It is always a pleasure to read something from Yellowstone and catch up with the family once more.

Loved the story even more on Audible

I read "Yellowstone Awakening" a few year ago and loved the story. But hearing the story, well it came to life. Nick Sarando, the narrator, brought young Kyle to life and it was like Kyle was telling the story. He does great with all the voices. Peggy writes of a young couple who fall in love but have great obstacles to overcome. For one, she is already married. I loved the story because you could see the couple grow not only in love but strength of character. They fight as well for their love of the Yellowstone land and its beauty. Happy endings of course.