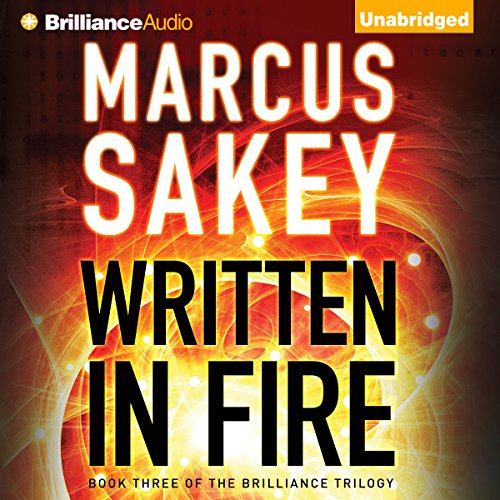 The explosive conclusion to the bestselling Brilliance Trilogy

For thirty years humanity struggled to cope with the brilliants, the 1 percent of people born with remarkable gifts. For thirty years we tried to avoid a devastating civil war.

The White House is a smoking ruin. Madison Square Garden is an internment camp. In Wyoming, an armed militia of thousands marches toward a final, apocalyptic battle.

Nick Cooper has spent his life fighting for his children and his country. Now, as the world staggers on the edge of ruin, he must risk everything he loves to face his oldest enemy - a brilliant terrorist so driven by his ideals that he will sacrifice humanity's future to achieve them.

From "one of our best storytellers" (Michael Connelly) comes the blistering conclusion to the acclaimed series that is a "forget-to-pick-up-milk, forget-to-water-the-plants, forget-to-eat total immersion experience" (Gillian Flynn).

What listeners say about Written in Fire

The story is good. it is narrated well. very much enjoyed listening to the series so far.

A finely read ending to a brilliant trilogy.

Good conclusion to the trilogy.

Tad predictable finale, but good characters and decent storyline. Solid series, would recommend to anyone.

I highly recommend this entire series. Its compelling, exciting, gritty and both very well written and proformed.

The whole series was thoroughly absorbing, if unputdownable isn't a word it should be added to the dictionary just to describe this series.

Written in Fire completes the three novel Brilliance Saga. Note that these books MUST be read in order written or they will make no sense at all.

The genre of the Brilliance Saga is contemporary sci-fi; that is, it occurs in a fictionally faltered present. One percent of the populations are classified as brilliant. That one percent is discriminated against and they rebel violently.

These three books are likely destined to be classics, but probably as a single book. This saga is a must read even for those who do normally like science fiction. Luke Daniels does a great job of narration.

It is ironic that Written in Fire was released on the same day as Destroyer: Rewinder Book 2 by Brett Battles which is another much anticipated and unusual contemporary science fiction novel.

More of the same (which is not bad)

The good: Like the predecessors, this book is non-stop action. And for better or worse, the conflicting parties (Sons of Liberty vs Children of Darwin) are extremely realistic and mirror many of the horrible world events going on lately. I found myself actually growing anxious about what they would do next.

The mediocre: It's just more of the same. The characters stay the same, the locations stay the same. In the first book, meeting Eric Epstein for the first time was a truly great scene. Epstein in book 3 was exactly the same - sitting in his cave and being socially awkward. There was an attempt to show stress and fatigue, but it was superficial.

The bad: Without giving away anything, I was disappointed in the ending. I thought the main antagonist broke out of character at the end (or at least did not use his gift consistently). John Smith's master plan (or most of it) was disappointingly convoluted and inelegant. The final resolution made me face palm.

On the other hand, I did like the epilogue, unlike some other reviewers.

All in all, it's good to have closure, but as you can tell, I was disappointed. The series started off strong but did not live up to its potential. Overall, I'd give the series 4 stars, but I thought this book individually was closer to a 3.

Sad ending to this trillogy

I was jumping out of my seat with bliss reading Brilliance. That book was pure joy in my mind. I loved it.

However, the two sequels were poorly thought through in my mind. What made Brilliance special was the weaving plot and character development. The sequels tried to have intricate plots, but they are so full of holes it makes for laughs rather than tense expectations. Also the characters dont change in these stories. They are already fully developed. Sakey pulls punches. You can tell he cares about those he created and does not do anything to further the character development a novel needs to live.

This story was decently written. The style is crisp and moves along. Its just where it moves to is goofy. Its the end of the world and only one man can save us. Blah.

this was a fun and interesting series. the premise is great, the characters interesting, and you care about them (or fear some of them). The story escalated through the books without jumping the shark. Interesting that the end of this book leaves things open for another.

Marcus Sakey has written a wonderful trilogy, with another one in the future, I'm guessing. He understands the concept of creating stakes with his writing, & amps them up across multiple character arcs & storylines with a lot of shades of very deep grey. Flew through the series because I just couldn't stop listening.

almost didn't make it to the end

this book is a great example of no rest for the weary and the listener is the weariest. I'm supposed to like the main character and think of him as a hero. but for the most part he's just a constant victim. this whole book could have been resolved and half the time. I'd return it but I finished it.

dispite the concept and the story have global implications yet the outside world can't mentioned more than 3 times in the entire trilogy very poor world building. if the gifted are a distinctly American phenomenon that should have been mentioned.

The book was not terrible. The characters were well developed, but the story was pretty much the same as the first two.

Repetitive and rather boring.

The trilogy started with a fun and interesting idea but turned out a cliché, the character are developed into archetypes, where even their simple description is repeated twice per book. The plot has no twists and surprise and even when characters die you feel nothing for them. Not really worth the time.