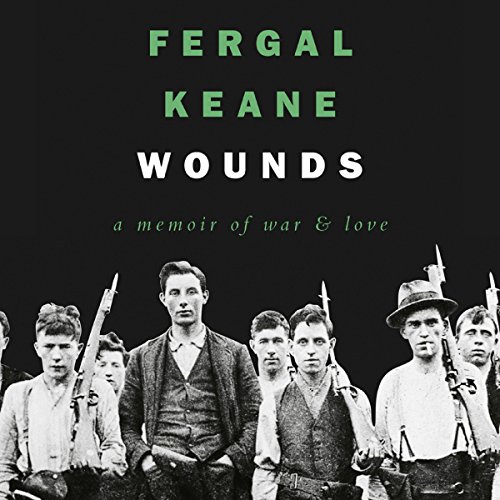 By: Fergal Keane
Narrated by: David McFetridge
Try for £0.00

A family story of blood and memory and the haunting power of the past.

After nearly three decades reporting conflict from all over the world for the BBC, Fergal Keane has gone home to Ireland to tell a story that lies at the root of his fascination with war. It is a family story of war and love, and how the ghosts of the past return to shape the present.

Wounds is a powerful memoir about Irish people who found themselves caught up in the revolution that followed the 1916 Rising, and in the pitiless violence of civil war in north Kerry after the British left in 1922.

It is the story of Keane's grandmother, Hanna Purtill, her brother Mick and his friend Con Brosnan, and how they and their neighbours took up guns to fight the British Empire and create an independent Ireland. And it is the story of another Irishman, Tobias O'Sullivan, who fought against them as a policeman because he believed it was his duty to uphold the law of his country.

Many thousands of people took part in the War of Independence and the Civil War that followed. Whatever side they chose, all were changed in some way by the costs of violence. Keane uses the experiences of his ancestral homeland in north Kerry to examine why people will kill for a cause and how the act of killing reverberates through the generations.

Praise for Fergal Keane: "Keane's real distinction was in his reporting talents, which as this book shows, are considerable." ( Evening Standard)
"His book is a memoir but it is so much more than that...a volume of the most exquisitely written and moving truth and honesty." ( TLS)
"A completely honest account of reporting conflict." ( The Independent)

What listeners say about Wounds

Another superb picture drawn.of Irish history and society. I learned more from this book than.I ever did in school. oh what lies we were told.
thank.you Fergal

A really great listen. Keane superbly dissects the complex situation in County Kerry during the War of Independence followed by the Civil War. Then examines the cyclic reoccurrence of violence through to the Troubles in N Ireland. Fantastic narration by David McFetridge.

This is a very accessible book on the Irish civil war, the years that led up to it, and the repercussions and events that followed,
FK makes it all the more engaging by overlaying the stories of families, friends and neighbours in a complex situation, how it affected their lives, and those of their children.
It’s not at all judgemental - the story is told by a highly experienced reporter, incorporating work from writers and poets and as well researched local history.
Informative and touching - well worth a read

Where does Wounds rank among all the audiobooks you’ve listened to so far?

As non fiction its right up there but I have a huge interest in the topic which is little written about.

I liked the fact that the way the lives of the participants is described long after the war and how it affected them. It causes the "southern Irish" reader to pause and consider the parallels between the War of Independence Vs the Modern troubles in N Ireland. (Of which there are many)

This book should be on the curriculum for every school in Ireland. Educational organisations take note.

The author relates the events of the Irish war of independence and subsequent civil war through the events of County Kerry where his own family come from and who themselves played a part in this upheaval of Irish society which laid the basis for the modern Irish state. Keane writes throughout with sympathy and a questioning mind as to how people felt at the time and subsequently about the rights and wrongs of the British, the Irish free staters and the IRA. And he relates his own experience of witnessing war as a reporter and how profoundly that has affected him. The reader David McFetridge, who does an excellent job, sounds a lot like the author to me. But perhaps thats because they are both Irish and I'm not. Hopefully more people will learn about modern Irish history through this book and have a greater understanding and sense of forgiveness in consequence.

A complex history so very well described and brought up to modern times with great insight.

The Irish war of independence and civil war told by journalist/war correspondent Fergal Keane, through the local prism of his family, their neighbours, their friends and 'enemies. Things not talked about, things forgotten - war is a thing 'outside' the songs. Riveting tales echoing into the present day and conveniently forgotten by many.

the kind of tale that is all too rarely told.
essential reading for anyone with an out cr of interest in Irish history

Microhistory of the Civil War