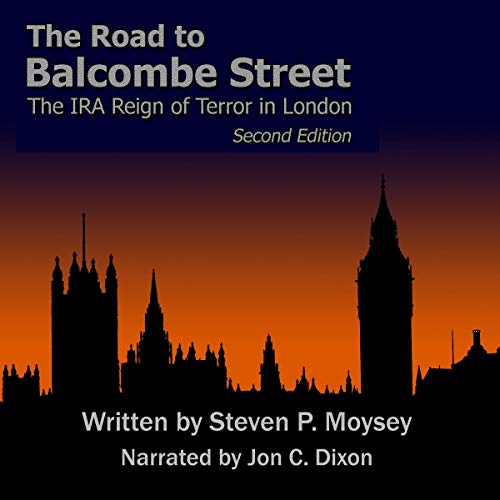 The Road to Balcombe Street: The IRA Reign of Terror in London, Second Edition

A pause resisting, real life thriller recounting the story of the Irish Republican Army Active Service Unit, placed in deep cover in London, and their murderous campaign against the British establishment. Equally gripping is the story of the Metropolitan police and their efforts to first identify the elusive group of terrorist, and then apprehend them. This is the true story of a deadly cat and mouse game played out on the streets of London that resulted in the infamous armed stand off at what would later be called the Balcombe Street Siege.

"This is the first comprehensive and all-embracing account of the events leading up to the hostage taking incident at Balcombe Street and the successful and peaceful efforts to secure the release of the victims and surrender of the perpetrators." (Lord Peter Imbert, CVO, QPM, DL)

What listeners say about The Road to Balcombe Street: The IRA Reign of Terror in London, Second Edition

A great, well documented read but...

despite an attempt to be even-handed, the author never really manages to hide a sense of British supremacy that has been one of the the main causes of the tragic history

This is an in-depth telling of story from a period, although in the relatively recent past, resonates with events of today. If you'd thought that the likes of AQ or ISIL had cornered the market on spontaneous, indiscriminate and bloody violence then think again. The IRA got there 30 or 40 years before them.
Steven Moysey's analysis is sometimes perhaps overly academic for some readers, but gives plenty of context and reminds us of just how fraught the political landscape of the 1970s actually was - for those of us growing up at the time that were fixed on events and not so much the causes.
The narration is slick and well-delivered; the sound quality excellent.
If you're interested in this kind of recent British history, or just want to understand what an accomplished and disciplined terrorist organisation the Provisional IRA really was, then this is the book for you.

Let down by narration in parts

This could have been an excellent listen, it seems to have been very well researched and well written up to a point.

The narrator has an excellent voice, tone and speed, but spoils the lot with brutal incorrect pronunciations of non English names and place names and use of a comical (if it was not for the content of the book) accents for the IRA members. Why he deemed it necessary to do their voices in any accent at all is beyond me, no other characters that figured in the book including Dr Ian Paisley, Prime Minister Margaret Thatcher or George Mitchell came in for any of his amateur voice acting.

The authors tone in relation to the miscarriage of justice suffered by the Guildford Four and the Birmingham Six seems to cause regret or unease for the wrong reasons, my interpretation of the authors coverage of both cases is that he would have preferred they remained jailed regardless of the evidence of their innocence, so not an academic study of this dark episode in history, a well researched but slightly biased view.

Finally it could have been an hour shorter, the lightweight review of siege tactics by police in sieges generally, not specific to the title is just filler at the end and better covered in other publications if that was what the reader was interested in.

narrator very poor, didn't like this book. Very poor book, I was very disappointed. I wouldn't recommend this book

Really interesting insight into events.
Gives the perspective primarily from the Police aspect but consideration is given to the feelings and thoughts of the IRA men
Learnt alot I never knew

A good listen - with caveats

An ‘enjoyable’ and engaging listen - if these terms are appropriate. Students of ‘the Troubles’, and indeed anyone who came of age in the 1970s, will find much here to appreciate. The events are very much set in the wider context of the day and the author gives a very good sense of time and place. I can see why the work is in the process of being adapted by a screenwriter. In short, I would recommend the book. However, with a few caveats..

For listeners of a left-leaning or Irish nationalist/Republican persuasion the author’s unconscious prejudices and biases can be a bit jarring. Northern Ireland is always ‘the Province’ or ‘Ulster’, terms most centrist journalists ditched a long time ago. Similarly, there is a frequent conflation of England and the UK, and the sense of entitlement of both in the frequent reference to ‘the Mainland’. Another irritation is the author’s use of somewhat Alan Partridge-meets-Andy McNab turns of phrase. For instance, IRA bombs are described as becoming “increasingly lethal” (increasingly?), while “gallant” police officers “take immediate command of the situation” and are engaged in a “deadly game of cat and mouse” with the enemy. For me this was all a bit wince-inducing and I struggled to get past it. I’m glad I did though as it’s a worthy effort and this is the only full-length book on this very important episode in recent British/Irish political history.

Very detailed blow by blow account of the events leading up to the Balcombe Street Siege.
The primary strength of this account is the detail, using police records, and interviews.
It is sobering and thought provoking since it does not eulogise nor demonise the IRA asu, however the objective descriptions of the injuries and deaths inflicted arising from their actions leaves a strong impression.

An Interesting true story, but to me it sounds a bit like keystone kops, luck has a lot to do with the capture of the Active Service Unit. I feel this story could have been shorted a lot, there was too much repetition of the story and well dragged out.
The narrator thought I thought was brilliant, very clear and a pleasure to listen too.
It is definitely worth reading or listening too.

Having lived through a lot of the troubles and remember watching the siege on television, this is an excellent account of what lead up to and the ending of the siege. It gives the public an insight into some of the reasons behind this event.


Very well narrated by Jon C Dixon, once you start to listen you are loathe to stop. Well done Mr Steven Moysey on an excellently written book, from a different perspective.

the power and the glory

The struggle between governments to maintain control and influence over each other, by any and all means. Dragging in innocent victims and what by some where considered legitimate targets.
Beautifully narrated with a style and passion similar to that of Richard Burton.

I discovered this book in August of 2019. The book is dominated by facts and an in depth analysis of the events, as well a look at the psychological states of those involved. The author covers the events leading up to Balcombe St in fantastic detail, as well as a very thorough play-by-play of the six day siege on Balcombe St during December 1975. In February 2020, I visited London for the first time. During my trip, I visited a few locations from the book. While in the area of Balcombe St, I listened again to the chapter involving the pursuit of the ASU up Rossmore Rd, and eventually down the stairs to Taunton Pl/Boston Pl/Balcombe St. The description of the events was so vivid that I could almost see the events taking place in front of me. This book is a must read for any fan of British and/or Irish history.

I must say that the history of the IRA reign of terror was something I was only familiar with by hearing about the story on national news from time to time all those years ago, and since in 1975 I was still so young, I honestly did not know much about the details. This is truly an enlightening and intriguing narrative about the atrocities wrought upon London by these terrorists. At times, I did feel a little overwhelmed about the details and wished I had bought the book at the same time to follow along, however, I do feel this is a good story, not only for the quality but for the depth of the research and history relayed in this book. He does an outstanding job in the amount of detail. Also, Jon Dixon, as the narrator, is incredible and his smooth and fluid voice adds much to the narrative and holding a listener's interest in the storyline. I look forward to the movie in the making and I do recommend this book as a great read and listen.

This book has been excellently researched and as such, highly informative of the various factors that led to the siege at Balcombe Street.
Counter-terrorist specialist Dr Steve Moysey is thorough in establishing the authentic details surrounding the build-up to the siege, the siege itself and the conclusion from meticulously reviewing the evidence he collected.
He explains the psychological aspects of all those involved and thoroughly describes the negotiation tactics employed by the negotiators.
Superbly narrated by Jon C Dixon.