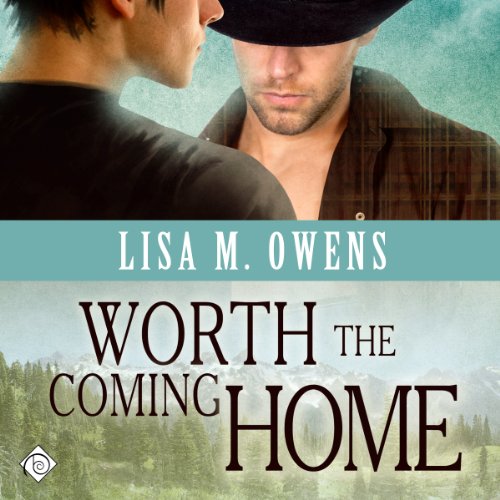 Worth the Coming Home

Worth the Coming Home

For Josh Brooks, it's a summer of wishes come true. First he gets his dream horse from a rival trainer. Then his brother's Army Ranger buddy, Dane Keller, comes to work on the ranch and Josh meets his dream lover too. Dane is hot, competent, and fresh out of Don't Ask, Don't Tell. Everything would be perfect-except nobody knows Josh and Dane are gay.

All Dane wants is a quiet life in a less claustrophobic closet and a ranch job where he can earn a living. But when his best friend's little brother, the one who wrote the letters that kept their spirits up in Afghanistan, turns out to have grown up in all the right ways, Dane can't help wanting more despite his fear of commitment.

While Dane and Josh are busy trying - and failing - to keep their hands to themselves, someone else is watching, biding his time. Then he strikes, first at Josh and then at the prized horse. When all of their secrets and fears are exposed, Dane is determined to protect Josh, even if it means leaving him behind.

Loved this book, hated the narration.

No. The narration was not very good (see full review below)

What other book might you compare Worth the Coming Home to and why?

L.C. Chase's pick up men series, as far as the writing and storyline goes. Both are similar with stories and topics.

Would you be willing to try another one of John Solo’s performances?

Josh Brooks is the dedicated horse whisperer on the Ranch he’s called home for over half his life. He and his brother, Jesse, live with their aunt and uncle having lost their parents when they were children. He hides his sexuality from everyone except his best friend for fear of their reaction.

Dane is Jesse’s best friend, the guys met while in the military serving in Afghanistan. Having separated himself from “don’t ask, don’t tell” all Dane wants is to live his life a little more open than the military allowed. He travels to Montana per invitation from Jesse and begins working with the brothers on the ranch. The attraction between Dane and Josh is electric and downright explosive. Can two closeted gay men maintain a relationship when they can’t even be honest with their friends and family about who they are? Hell, they can’t even be honest with themselves! Their only saving grace might just be the fact that they can actually be honest with each other.

Someone is watching. Someone has targeted Josh and his precious horses. After Josh is outed very publically and painfully, he withdraws from everyone and everything. Except his horses. Owens has managed to blend several highly debated topics within an engrossing storyline and keep it in good taste. Homophobia, hatred, ignorance and PTSD coupled with love, compassion and family values. But after Josh is hurt not once, but twice, Dane leaves feeling like he’s failed and he can’t protect him. Can Josh convince the man he loves that he’s worth coming home to?

I will warn you, if you aren’t a fan of dominant/submissive relationships, this may not be the book for you. It is in no way, shape or form a bad thing in this storyline. Dane is the alpha male, the dominant in the relationship. Josh is submissive and he loves it, he wants Dane to take control and I assure you, he’s never forced into anything. I loved the way they found common ground and their relationship became stronger. The sex is HOT and these boys like variety. They don’t care if it’s the bed, the wall, the barn, the open range or the kitchen table! If you haven’t read this one yet, you really must!!

I love to grab audio copies of books I’ve already read, a lot of times, the audio can take on a new life and give you an entirely different story. Sadly, in this case, the audio hindered the overall feel of the book for me. This was my first ride with John Solo and I was not impressed. While I appreciated that he made the effort to separate the characters with different tones and inflections for various characters, I never questioned who I was listening to, his voice wasn’t very appealing. Extremely nasally and he had a bad habit of adding emphasis to words at the wrong time which gave them a different meaning than they had when I was reading them.

One of my favorite aspects of this book was the relationship between Dane and Josh, how Dane was this powerful person always exerting his dominance that was balanced with love. The way Solo voiced him made him sound cruel and almost unfeeling at times, and that just annoyed the crap out of me.

My suggestion, this is still a must read story but READ it, pass on the audio book.

So, in conclusion, e-book 5 stars, audio 3 stars. The wrong narrator can ruin a good story guys.

What was most disappointing about Lisa M. Owens’s story?

It was hard to like either characters, Josh is a door mat and Dane is this messed up Dom character. I found the fact that Dane kept referring to Josh as "cowboy" very irritating. The sex scenes were interesting, but violent and almost uncomfortable. It was missing some kind of conversation, where Josh and Dane discussed the intensity that was comfortable for both of them. You just felt like Dane was steam rolling over Josh, and despite Josh's protest, he always enjoyed it in the end. Not sure I liked the message there. Too borderline non-consensual for me, sex should not be all about one partners pleasure.

Have you listened to any of John Solo’s other performances before? How does this one compare?

The narrator was actually good, it was just hard to appreciate him, when the story was irritating me.

It has a basic outline, that is o.k. I just found the build up of the characters that were a forceful male and defenseless female.