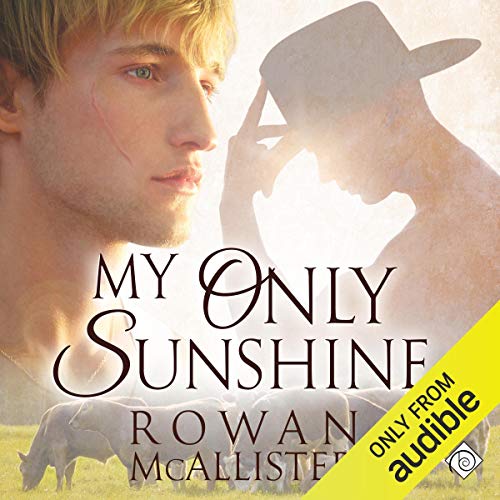 Tanner Wallis is nearly at the end of his rope the night Mason Seidel finds him lying next to the mangled body of a cow on the back pastures of the Seidel family's Wyoming ranch. Recently out of the hospital after he and his boyfriend were brutally beaten, Tanner is jobless, homeless, and almost penniless. His desperate hope is that Mason will believe he's innocent of the senseless crime and give him a place to heal, both physically and emotionally, until he can get on his feet again.

But Mason already has enough on his plate. He's only been back on the ranch a few months, ten years after his father kicked him out for being gay, and only because his sister begged him to come help after the man's disabling stroke. With all his responsibilities - running the struggling ranch and keeping his sister and father off his back-Mason can't really afford the distraction Tanner represents. But he can't just abandon the attractive young man either. There's trouble in spades on the ranch, but if they face it together, Mason and Tanner might find a future with a little sunshine.

The narrator did a great job of making this book bearable to listen to. There was some production errors, but he did great in the diversity of voices and the occasional accent. That said this was an extremely frustrating story. The relationship between Tanner and Mason is very sweet and great, I really like it on its own. But Mason’s family is vile. His father is a waste of skin and I was offended that the other characters kept saying “he is a good man at heart.” I don’t think any man that exuded that much hate can’t be a “good man” in any way, shape or form. Also, even though the author tried to redeem the sister, I still thought she was just as bad as her father. She “used” her brother and was perfectly happy denying him any happiness; she was a selfish b**ch. And I was even extremely frustrated at Mason for allowing himself to be used like he did. Overall, it just left a bad taste in my mouth.

I really enjoyed the story. The narrator was amazing, and his performance added so much to the story. I can’t recommend this book enough.

Of Ranching and Redemption

The family and forgiveness aspects of this story were unexpected and well thought out. There was substance beyond the basic cowboys in love story-line and both main characters were guys I liked spending time with.

Which character – as performed by Jason Clearfield – was your favorite?

While Mason was well-done Tanner's plaintive voice rang the truest for me. Jason Clearfield does a great job of giving voice to all the characters and does a credible job even with the women's voices. There ARE a few "verbal typos" that I wish had been fixed... One's GAYDAR "pings" (rhymes with rings) not "pinges" (rhymes with hinges) and rangy should rhyme with mangy, not tangy. But these are minor problems. Overall the characterization and the narration were better than many I've heard and it suited the story very well.

Thirty-something Mason Seidel has returned to temporarily run his family ranch ten years after being kicked out for being gay. His aging father has had a stroke and someone needs to run the place and help with the old man's recovery but his sister can't with her obligations to her husband and their kids.

Mason has decided that being the better man and doing the right thing means he needs to try forgive and help when needed. But then young, homeless Tanner Wallis is found on his property homeless and still recovering from a violent beating and Mason discovers that he's needed by more than just his family... and just maybe he has needs too.

They say that only family can best pull your strings because they're the ones that tied them there. This story deals with two young men struggling to deal with bigoted unforgiving parents and striving to rise above. The story is set in the lonely state of Wyoming and the lonely echos of Matthew Shepard's ordeal are heard in this story as well.

There are a plethora of stories about parents who don't take their children's coming out well. But this is somewhat unique. In this scenario it's now ten years later and the parent need the child. How will that play out? Can the disowned child be a more humane person than their parents have proven to be?

The writing is skillful and evocative and soon the reader is spending time on a cattle ranch in the high prairie with a couple of damaged but likable guys who are trying to navigate the family drama while they define what a cowboy life together might be. The family issues and questions of acceptance here are complex and it's clear that there is no easy solution but you soon find yourself rooting for these guys to find a way.

My first audible book, and I really enjoyed it. The narrator was quite good, and the story moved along at a good pace with just the right amount of twists sprinkled about.

I love happy endings, and it’s beginning to seem like more and more gay romance novels are getting this figured out. Definitely worth the time.

the concept of the story was good but the ending felt rushed and I didn't really think Mason should have forgiven Diana so easily.

The storyline was okay. Was is it original? No. Could it have been more developed? Yes. I don't​ know how to elaborate without giving too much away. Anyway, does any of this really matter? No. Then, what's the problem? The quality of the narrator's performance and the recording were awful. It skipped in spots. There was poor exiting in production - i.e. repetition of passages, changes in sound quality, lack of consistency of narrator's character interpretation. I would recommend looking into getting another version of the book - ebook, maybe?

What did you love best about My Only Sunshine?

I liked the romance between Tanner and Mason. I liked how they became frieds first and both needed someone.

What was one of the most memorable moments of My Only Sunshine?

If you could rename My Only Sunshine, what would you call it?

A Gift from Heaven

Mason's Dad threw him out at a young age.. he had to leave and get a desk job though he loved the ranch. After his dad suffers a stroke, he comes back to help his sister even though his dad is still bitter and mean toward him.

Tanner was thrown out at a young age as well; he has been living with a boyfriend that was questionable. His boyfriend owed some Russians money, and they took it out on beating up Tanner. Tanner had nowhere to go so was trying to find places when the last ride he hitchhiked also robbed him, beat him and left him on the road.

Tanner happened on Mason's ranch; some men were brutally beating a cow, so the sheriff told them Tanner had to hang around for a while. Mason gave him a job for room and board on the ranch hiding him from his dad and sister.

You are my only Sunshine is a very sweet story about two lonely men. I loved Mason. Mason giving up his life for his dad after the way he was treated and they way his father still treats him was just heartwarming. I liked thinking Tanner was a gift from heaven to reward him for his patience and love for his family. The story is mainly about love, life, and family, a bit of ranching with the bit of mystery about who is killing the cows on all the ranches and why. I will say that who did this and why still didn't quite make sense to me. It was summed up in a very rushed way. I would have liked to know more about why these people could and would do such a thing. Having said that...I still enjoyed the story as a sweet, sexy romantic western it was.

Story ok. Narrator as Well. But sometimes i forgot to listen and didnt borther rewinding. So i guess not captivating