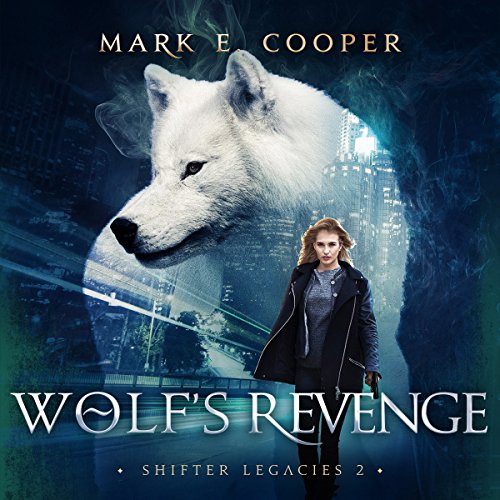 By: Mark E. Cooper
Narrated by: Mikael Naramore
Try for £0.00

Los Angeles: A city where monsters live cheek by jowl with humans. A city where violence simmers just below the surface. Lieutenant Christine Humber of the LAPD's robbery homicide division is well aware of that violence. She has worked for years in the city's most violent district, known locally as Monster Central.

When called to a murder scene, Chris and her partner learn that the victim is a shifter - a werewolf - and he died hard. Chris soon realises that she has a very special serial killer loose in her city, one that is taking down Monster Central's bad boys one by one. Who or what can kill a werewolf and leave no trace? Chris and her partner race to find out.

What listeners say about Wolf's Revenge

What other book might you compare Wolf's Revenge to, and why?

This book has no real comparison - the world is so Immerse and the characters leap out with marks writing and mikael ' s narration !

This is book 2 of the series so may contain spoilers for book 1!!

In the last book we had a lot of characters to focus on but in this one it's mostly about Chris, which I loved because she was awesome in book 1!! Chris is a homicide detective and a great one at that, though she is rash and impulsive. This impulsiveness leads to Chris facing down a Shifter by herself and unfortunately she gets bitten. She wakes in hospital disoriented, with no memory of how she got there. Slowly her memory comes back and the doc has to tell her that her life is irrevocably changed. She wants to carry on as she was but being a Shifter there is so much she can't do, like be a cop!! With her life changed forever, all Chris wants to do is get revenge and end the life of the Shifter who is killing and changing people, including herself! How will Chris handle being a Shifter?? Well, you will have to read it to find out ;)

Now I really enjoyed book 1 and was eagerly looking forward to this. I'm glad to say that this is even better than the first. The fact that there are less POV helps as well. I loved Chris in book 1 and thought she was kick ass, but now she ends up as a Shifter she turns even more kick ass. She takes no prisoner!!! I felt for her when her life changed, she lost basically everything simply because she was a Shifter, but she doesn't let it keep her down. She dusts herself off and sets out to right wrongs. The author knows how to write a strong female lead.

Once again, Mark E Cooper has created an action packed and fast paced read. This man sure knows how to grab you and pull you in!! You are thrown into the action, along with the characters, from the very start and it's pretty much non stop all the time. There is so much going on in the story that I didn't want it to end. I sure hope there is more set in this amazing world!!

The audio was awesome as always though I did find it hard to truly enjoy Michael Naramores narration this time because being that the book is mainly from a female POV I thought it should of been a female reading it. DOn't get me wrong though, Michael did a great job as always and really has a range of tones, I just thought having a female would of added more. Saying that, I still highly recommend the audio because it does bring the story to life!

What did you love best about Wolf's Revenge?

I loved getting to send more time with lieutenant Chris Humber. She is a strong and hard headed person who i would love to read more about.

The writing and narration are really great. I was able to just lose myself in the story.

My favorite scene was when Chris changed for the first time.

I want another story in this series. I will keep a look out for more of Mark Coopers books.

This is the second in the Shifter Legacies series. In this book we meet up with Chris, a police detective, one night as she is investigating a murder. In the course of her investigation she is attacked and ends up on the other side of the shifter/human divide. Now that she is a changed person, will she be able to handle her new life?

I really enjoyed this book. It was nice to meet up with some of the characters that we were introduced to in the first book, Way of the Wolf. Mr. Cooper has created a world of the future were shifters/monsters are living out in the open. Mr. Naramore's narration draws you in and brings this world to life.

I would recommend reading the first book in this series so as not to be lost here in the second. I would listen to this book again.

This was a good follow up book. I think it is better than the first book. I would recommend it to readers and listeners of audiobook. I recommend.

Excellent story. However, many questions remained unanswered. Left me unsatisfied at the end and disappointed.

Would have been better if Chris wasn't in it

I like strong female characters, however every time Chris got into a life or death situation (which are many due to her stubbornness and stupidity) I was hoping for her death. The side characters are better written and would make more interesting main characters. The world building was great. I love the dual nature that is in shifters and the narrator is fantastic in bringing the wolves to life.

Wolf's Revenge is the second book in the Shifters Legacies series and it is Lieutenant Chris Humber's story. Chris is a Lieutenant in the LAPD trying to solve the string of shifters being murder with no trace of evidence. With tensions and prejudice high between humans and non-humans, Chris need a break in the case to solve the strings of murders.

After being kick off the force, Chris is still determined to catch her serial killer with the help of non-humans and to adopt their ways.

The narrator Makael Nevermore did a very good job with the voices of the characters. It is easy to recognize which characters is speaking. Hopefully, he will continue narrating the next two books in the series.

It is a pretty good series with the alternative Los Angeles where monsters do exist and prejudice is at a high between humans and monsters. It is ironic that some of the monsters are more human than the humans themselves.

I was given this audiobook by the author via Audiobook Blast for an honest review. I was not compensated or influence any way for writing this review.

Great continuation of The Shifter Legacies

This story follows cop Chris, one of the main characters in the prequel 'Way of the Wolf' as she investigates a murder by a psychopathic shifter. It's written entirely from Chris' point of view and follows her evolution as a character as she learns more about the world of shifters.

Because I already knew most of the characters from the previous book, it was easier to keep track of the 'cast' when listening to this on audible. I enjoyed the story; the fight scenes are well-written, the world-building is interesting and the narration is excellent.

Now, what I want to know is: are there more in this series?

An interesting meld of Paranormal and Action

Would you consider the audio edition of Wolf's Revenge to be better than the print version?

For me the audio version was great because I can listen to it while I'm driving.

I still love Chris, the ex-cop. She is practical, and able to deal with the changes in her life. She mourns her past but dives into her future with agility.

Several made me laugh, but I liked the scene in the arena when she figured out a way to thwart the Alley Dog alpha, and not become his mate. It was clever, and it worked.

yes, when I had to turn it off , I thought about the story for quite awhile afterward, I like being drawn into a writers universe like that.

This series has had some interesting variance from the genre of were's and vampires. I'm interested to see where it goes.

Great sequel to the beginning of the series!

Amazing way to continue this incredible saga. All the new characters add a new flavor to the already interesting mix. I can't wait for the installment!