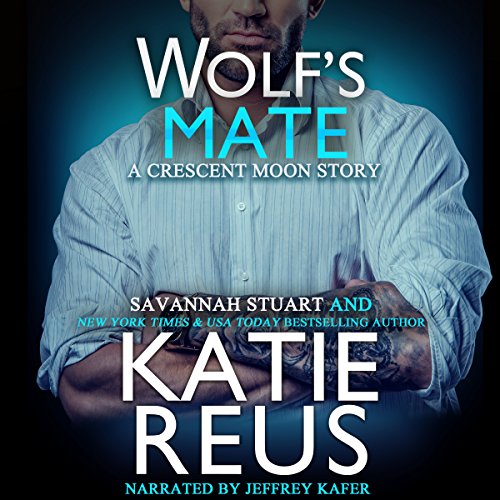 By: Katie Reus,Savannah Stuart
Narrated by: Jeffrey Kafer
Try for £0.00

She wasn’t supposed to fall for him.

Erica’s time away from her pack was just supposed to be fun. Then she met Hudson. Instead of the no-strings attached fling, she ended up falling for him. But they’d promised each other that they’d keep things casual. Instead of risking her heart, she ran. Now she’s pregnant - and he’s determined to claim her. But the last thing she wants is to be an obligation to him.

Erica could never be a duty to Hudson, but for some reason that’s what she thinks she is. He tried to go slow, to give her space - so he wouldn’t scare her off. Now he realizes that was a mistake. It’s time for this wolf to claim his mate. Unfortunately a neighboring pack is stirring up trouble for his pack, and his she-wolf is determined to keep walls between them. Walls he intends to bring down once and for all.

What listeners say about Wolf's Mate

Another great addition to the Crescent Moon Series

I would have liked to give this story 3.5 Stars but unfortunately there isn't a facility to do so, so rated with 3 Stars.

We are introduced to the main characters when they have already spent an explosive month with each other but it was now time to make a decision to either stay or go. Erica wants to stay as she has fallen in love but Hudson hasn't said anything about wanting her to stay, or about mating her so it is obviously time to move on. Over the next few weeks they kept in touch via Skype and calls but Erica has now discovered she is pregnant and feels she owes it to Hudson to tell him face-to-face that he is going to be a father.

For a novella of 2 hours & 13 minutes this seemed to have a lot of content and we get alternating points of view so see the story from both sides. Yes there are misunderstanding on both sides which would have been cleared up easily if both parties communicated with each other, but there isn't a lot of drama or angst just a pleasant love story. As always with a Katie Reus story it flows well making the story very enjoyable......Although I am not a fan of Novellas and often skip them when reading a series, I always look forward to all of Katie's books whether full stories or short as I know I will be in for a good read.

I was given a free audio copy by the author with the request to leave a review, but it was not a condition and not compulsory to do so. The story was read by Jeffrey Kafer who in my opinion did a good job.

This was a really good book. Erica spent time away from her pack to have fun. She wanted a “no strings attached” fling but feel for him. Erica didn’t want to risk her heart, so she ran from him. She is pregnant and he wants to claim her. Will he claim her? Does he feel she is a duty to him instead of love? I thoroughly enjoyed this book.

Jeffrey Kafer is an awesome narrator. He made the book even better. I received this free copy audiobook at my request and have voluntarily left this review.

I have to start off by saying that I absolutely loved the narrator and I hope he continues to do every book in this series. I enjoyed this book so much that even though I read the book, I had to have the audiobook. I love a good shifter romance story and this one did not disappoint. I couldn't get enough of these characters and I wasn't ready for it to end. I truly wish the story was a little bit longer. I enjoyed Hudson and Erica characters a lot. Their story was exciting, entertaining, funny and steamy. I don't want to reveal much about the story because it is short, but this story will leave you with a smile on your face. I look forward to reading the next book in this series.

This is a great book; this is the seventh book in the Crescent Moon series written by Katie Reus and narrated by Jeffrey Kafer. Erica’s time away from her pack was just supposed to be fun. Then she met Hudson. Instead of the no-strings attached fling, she ended up falling for him. But they’d promised each other that they’d keep things casual. Instead of risking her heart, she ran. Now she’s pregnant and he’s determined to claim her. But the last thing she wants is to be an obligation to him.
The author and the narrator did a great job on this. I really enjoyed listening to it and I am looking forward to the next book in this great series.

WOLF'S MATE By Katie Reus
Wolf's Mate is the 7th addition to the Crescent Moon series and it is a welcome one! I really enjoyed the characters of Hudson and Erica. Erica visiting his pack. Since they have a tremendous amount of chemistry, their no obligation affair catches fire and has both of them secretly falling for the other and wanting to change the rules. She panics and runs back to her pack. Read the book to see how they work it out. Katie Reus has very fleshed out characters that makes you care about them. There is a solid story line with great flow. Jeffrey Kafer is the narrator and he is always excellent!

It’s official! I’m absolutely in love with this narrator! I haven’t heard one rendition by him that I haven’t been completely pulled into and this audio solidifies his spot on my top favorite narrator list. He brought so much passion and intensity to this story, bringing it to life in a way reading it alone could have never done. I was so caught up in it that I forgot it was a man doing a woman’s voice. I love when that happens.


Hudson and Erica agree to a casual fling. A fling that Erica is now wishing was more. When it’s time for her to return to her home state, Hudson’s “stay a few more days” isn’t the proclamation of love she would like. A month later she’s returning to Hudson because things just got serious and she is forced to confront him, this time in person rather than phone, text or Skype.

This is a very nice shifter novella that starts after this couple have been together. I loved how Hudson, from a different generation than Erica, was trying not to rush her but once she returned he wouldn’t let her leave. While Erica was pretty independent, I appreciated that she longed for that something more from Hudson. I never felt truly aggravated with him as the story wasn’t long enough to give me a chance to garner those emotions.

Hudson is all alpha, all possessive, and all protective and this novella was long enough to highlight that fact. A fact that I love. There are secondary characters that support the hero and heroine and some that I would like to have more from. The steam is high as is the chemistry between these two. Overall, a very enjoyable read when you need something fast with a great alpha hero.

I voluntarily read and reviewed an advanced copy of this book provided by NetGalley. All thoughts and opinions are my own.

Erica is a member of Grant' pack and she took a year off to travel a bit and ended up at a packs place in Montana. Falling for none other than the Alpha's brother and Beta Hudson.
It was to be nothing but casual but oh yea we have heard that one before.
Hudson is everything she could ever want in a mate, a man. He is loyal, honest, treats her well and is excellent in the sack.

Erica heads back to her own pack but something doesn't sit right.
Wolf shifters didn't get sick and she was sick. She couldn't hide it from Grant and he knows whats up. So back to Montana she goes but when she gets there she learns Hudson isn't there... He what???

I loved this story and the narrator does a fantastic job.

Narrator Review:
This is a re-read with the audiobook version. I've listened to Jeffrey Kafer several times now and he's one of the few male narrators that I recommend. It's hard for a male with such a deep voice to portray the heroine and yet I have no issues when Jeffrey Kafer does it. I'm very appreciative that he doesn't try to do a high pitched voice.

Story Review:
This series of novellas is really enjoyable. You can read them as standalone so you aren't missing out if you hop into this one first.

Normally I don't enjoy the reluctant hero very much but the author did a great job of showing us that he had no doubts when it came to Erica. Hudson is over a 100 years older than her and he thought with her being so much younger that he would scare her off if he got all possessive with her right away. He clearly showed he wanted her to stay. Unfortunately, Erica expected him to want to claim her right away so his hesitancy to do so sent her the wrong signals.

This may sound like this is an angsty read, but it really isn't. I didn't worry over these two because their feelings for each other clearly translated on the pages. This is the kind of book I like to read if I want something quick, fun and that will satisfies my like for a jealous/possessive hero.


What a wonderful addition to this series. Wolf's Mate is the story of Hudson, a powerful strong second in command wolf shifter, who finds his beautiful mate. Erica is a she wolf that is taking a vaction when she wonders into Montana. Erica was never planing to fall in love or stay with Hudson. What happens when she relizes her and Hudson are mates. Can a couple of headstrong people find the kind of love that its life long. How far will you go? Read this amazing story to find out what happens.