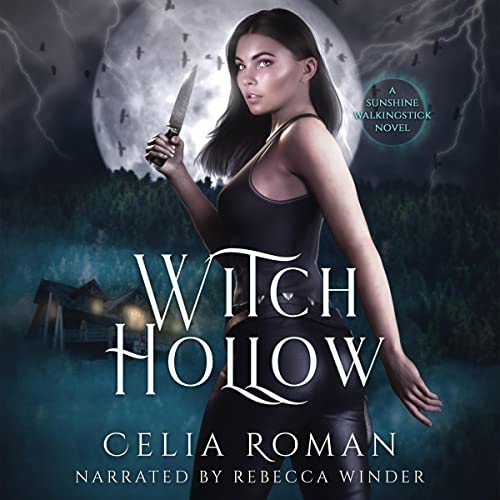 By: Celia Roman
Narrated by: Rebecca Winder
Try for £0.00

The day Terry Whitehead showed up on my door, I shoulda knowed trouble was hot on his heels, Terry being the feller what planted my boy Henry in my belly, then left me so fast, my head spun. Seems his daughter, Henry's half-sister, went missing and the police done give up on finding her.

Much as I hated having anything to do with Terry, I couldn't hardly abandon a young'un, especially one what was close kin to my boy, God rest him.

Only, little Sophie weren't the only kid missing, and whatever took her left a trail of dark magic in its wake. Time was running short and the trail was cold. For the first time since Henry died, I floundered. Could I track down the monster what'd took Sophie while she could still be saved, or would my pride cost that little girl her life and all them other young'uns', too?

What listeners say about Witch Hollow

Each book in this series is better than the previous one! I can't wait for book no 5!

You're in for a treat with this audio!

It's no secret that the Sunshine Walkingstick urban fantasy series makes me happy, just like walking into grandma's warm, welcoming home on a cold winter's day.
If you've been followin' the series, and why would you not, hmmm? You already know that there's nothin' that Sunshine won't do for her family... Even if that means talkin' to Terry, her ex, a man who only stayed around long enough to get her with child, but he's in crisis, his daughter's been kidnapped and the police all but given up, and well, everyone know'd that Sunshine's the one you call on when you need help... Sunshine can't help herself when it comes to children, and way she sees it, the girl would be her boy's (God rest his soul) half sister, so family, right!
Only this time around, she comes up against witches! I still get plenty of cryptid action when Sunshine's daddy's side of the family get involved as they're a people of the two-natured, painter's (panther shifters)... and we also find out Missy's secrets.
So you're gonna be in for a treat when you listen, you really need the audio version, so you don't miss out on Rebecca's sweet voice! I wouldn't be surprised to find you in the kitchen making yourself a plate full of biscuits and gravy, after you've listened to Witch Hollow! LOL


Favorite quote from the book... "There was power in the balance, power in the different stages of motherhood we represented, power in the way we come together, mother potential, mother awaitin', mother in the now, mother in morning. What could ever be more powerful than Parents United for sake of children."

Witch Hollow, the fourth book in the Sunshine Walkingstick series, is cleverly written and well-plotted. I was captivated from the very beginning to the end. Celia Roman is an exceptional author with a fantastic imagination. She has done a fabulous job with the world-building, an essential element in a paranormal/urban fantasy genre. The storyline is entertaining and engaging, loaded with action, drama, twists, and turns.

I love the characters, they are well-developed, charming, and utterly intriguing. Roman has created the perfect heroine; Sunshine is intelligent, brave, and very loyal, she goes over and beyond for her family.

The narration by Rebecca Winder is outstanding. She has a very pleasing voice, and I love her accent. Her telling will sweep you away and draw you into this story.
I was given a free copy of this audiobook at my request and have voluntarily left this review.

great series! I truly enjoyed the tale the author wove and the narrator was amazing! great job all the way around!

I absolutely loved it! This book caught my attention from the very beginning and held it throughout the entire book. This book is full of action, drama and so much adventure. The narration was excellent. The author did an excellent job with the character builds and plot. I look forward to reading more books in this series! I was given this free review copy audiobook at my request and have voluntarily left this review.

Sunny Walkingstick is on yet another adventure that leads her to get closer to her family in a multitude of ways. She finds out more about those close to her and her eyes are opened wide in the knowledge! I just can't get enough of this series!

Celia Roman has done it again! This series just gets better and better! Witch Hollow finally breaks through some of the hang-ups Sunny has that have kept her from really letting herself get close to Riley and leaning on others for help. Instead of fighting monsters of Cherokee folklore, this time, she is up against an ancient danger, in the form of witches. This book has one of my favorite scenes in all the books of the series. When the women in various stages of motherhood join together to fight for the lost children, it's a truly profound and heart-wrenching moment. I simply loved it. It brought me to tears. As usual, Sunny's spunk and snark are hilarious. She's truly a delightful heroine. Rebecca Winder brings the story to life with an impressive array of voices that make the characters easy to differentiate. A simply outstanding production.

I love this series. The main character is likeable. There is a cast of quirky characters. The mysteries are dark and unique. The narrator's performance is well paced and her accent and voices add to the enjoyment of the book. This is book four. Start with first book to truly enjoy series.

Loved this. So many things going on always on the edge of the chair listening.

When Henry's half sister goes missing Sunny takes on the toughest case yet. It's great story and bringing nearly all the characters from the series together and a lot of secrets to light. This is an incredible series with great narration and I hope there is more Sunshine to come.

I love reading mysteries and this us a fantastic one. I am loving this series. I love how the Narrator brings out the individuals voices. And the Author has brought a fantastic story to fruition. Sunshine walking stick. Investigates things. I definitely recommend this read.
Shauna Joesten