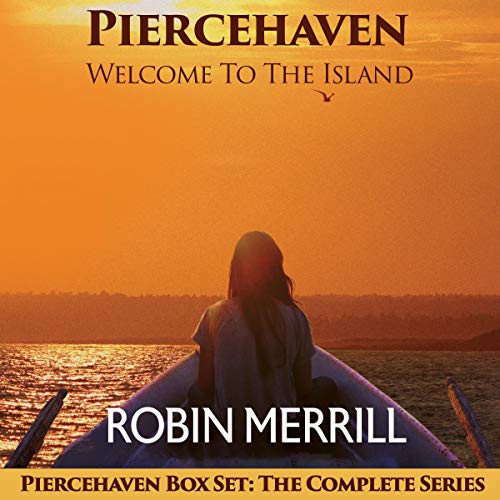 By: Robin Merrill
Narrated by: Rebecca Winder
Try for £0.00

The complete Piercehaven series! If you enjoy realistic, faith-filled fiction, you want to visit Piercehaven.

A new teacher. A dark secret. A bunch of kids caught in the middle.

Emily has just moved to a remote Maine island, but it feels like a different planet. Everything seems to be a mystery. Is her new job really in danger? Is the gorgeous lobsterman really interested in her? Is it possible an entire town is that obsessed with basketball?

Piercehaven Power wants to erect two windmills on Chicken Hill. Some islanders will do anything to stop this from happening. Will the controversy rip this tight-knit community apart? Can Emily's new softball team put this small Maine island back together again?

What listeners say about Piercehaven Box Set: The Complete Series

I think that I’m one of the few reviewers who HASN’T been gifted a copy of this book/recording, so I’m not going to be influenced by gratitude. (With apologies to those who supplied all of those 5 Star reviews)!

This is a very twee story. I wasn’t unimpressed with the delivery, as it was very ‘schoolgirlish’, which helped to make it twee!

As a Christian, not having deliberately read any contemporary novels with an overt Christian lifestyle slant, I found this endearing and interesting. Maybe I’m a very assertive person, so my Christianity doesn’t translate in quite the same way as Emily’s, but her passive approach was unusual and probably worked well for the tenor of the story.

As far as the story went, the plot was a weighty one, which was written in a very lacklustre way! I’m afraid that NONE of the characters had ANY depth to them! They were all pretty one dimensional, there were a few who Should have been multifaceted, who weren’t! How Emily and James got to the stage where they were declaring their love for each other with only 6 months of once a week dinner dates, is beyond me!!

So, I’m torn... I think that the novelty of an overt declaration and showing of Christianity in a day to day lifestyle was handled well enough. However, the story overall was lacking. The plot petered out on several points, so the ending was a bit flat (especially with the school board decisions, Kyle, the basketball teams...), so many loose ends which aren’t important enough to swing over into book 2 or beyond.


WINDMILLS
I wasn’t as enthused about this story, mainly because the topics were not necessarily engrossing for me! I’m English, so softball/baseball is not a default sport for me (although conversely, I was TOTALLY into Basketball)! However, the Softball aspect of the plot was Far Too detailed for me (& largely incomprehensible).

Again there is a lack of depth in most in the characters (although we learn a little more about some of the young girls, but not all). The only real relevance of the title (Windmills), was to introduce a star Baseball player!!!

I’ll be honest, I can’t say that I truly enjoyed this, so don’t feel that I should rate it. My best recommendation is 2½ Stars ⭐️⭐️✨

TRESPASS
I’ve concluded that I don’t like James! He is not a 20th or 21st century male. He comes across as an articulate Neanderthal! I haven’t warmed to him at all... But Emily is, by turns, capable and foolish! I have to say that I truly didn’t enjoy the way this romance was written, the ‘happy couple’ are not endearing. So, they’re obviously well suited. There could have been a better way to represent a young Christian couple.

There’s an accompanying mystery, to which the title refers, which is weird, anticlimactic and juvenile. It doesn’t show anyone in a good light - especially the Christians!

There’s a backstory to one family that is never really addressed, so the culmination of it, falls flat!

In fact, that’s my overall take on the entire series: outside of the sports - Basketball and Softball - there are no characterised stories. No depth to anything and, to be honest, the relationships are just barely surface level. No time was taken to introduce Emily’s family, it seemed more like they had come to a family picnic rather than a wedding! It was all, so lacking!

As an audiobook, it was easy to listen to in the background of chores, but I’d be surprised if anyone would persevere with reading this series in its entirety. It really isn’t a compelling read.

Overall I would give this Box Set 2½ stars (& never willingly read another book by this author, as we’re not suited for each other).

The Christian life is not always the easy life. We all make choices and learn to live with the consequences, good or bad, of those choices. Piercehaven Box Set is a complete trilogy of one teachers life adventures on a Maine island as she learns to live with her choices in her career and life on this island that is entirely set in its ways and does not like outsiders changing things. Each book has a different focus. First is basketball. Then softball. and the last book is a combination murder mystery and wedding planning. All with a very Christian basis as she works through each adventure.

Very worth the credit. Excellent story and narration makes for a "can't stop now" listen.

Book 1
Emily the new person and the new teacher on this small island. Will she be excepted and welcome, she has a strong faith and it will be challenge. Finding the town has one thing the basketball team and the secrets that surround it.
Book 2
Emily is caught up once again. With basketball, now the windmills. A town with a lot of set ideas that don’t want changes. Humorous and the bickering makes a interesting, enjoyable read.
Book 3
Emily planning a wedding, when a man goes missing. The story is down to earth of life on a small island, does she really know any of them. A good series and good narration
Given audio for my voluntary review and my honest opinion